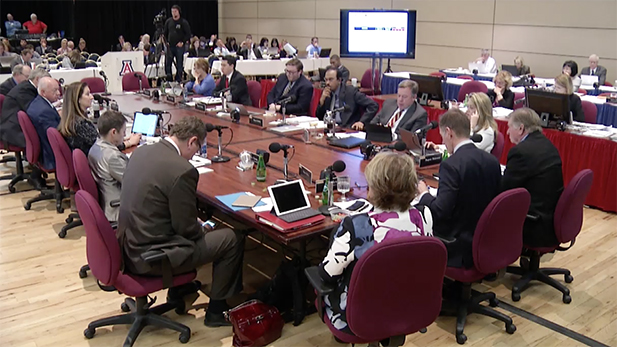 Members of the Arizona Board of Regents meeting at the University of Arizona Thursday. The regents accepted all of the tuition and fee proposals that the three universities put before them.

The Arizona Board of Regents set tuition at the state’s three public universities Thursday for incoming students for the 2017-18 academic year.

Student Regent Jared Gorsche voted no on all increases and was joined by Regent Ram Krishna on two votes, concerning Northern Arizona University and the University of Arizona's fee proposal.

The cost of studying for new students at all three universities will go up.

Tuition and fees for incoming in-state undergraduate students at the UA will increase 3.9 percent. Regents approved a controversial new $100 fee to support athletics.

During the public comment session of the meeting, a number of students spoke out against the fee, including Alexandra Cordell.

"I almost never missed a football game or a basketball game," she said. "And I really do see the importance of that. But I don’t think that this fee should be imposed on all students who do not share that same value."

New grad students will be charged a $50 athletics fee, but can opt out.

Incoming out-of-state undergraduates will see a 2 percent increase in the cost of studying.

The vast majority of returning undergraduate students at the UA won’t be affected by the changes. Around 92 percent are on the guaranteed tuition plan that the school introduced three years ago.

New in-state undergraduates at NAU will pay 3 percent more. NAU also has a tuition plan that locks the cost of studying in for four years, so, as at the UA, most returning students will be unaffected by the changes.

Regents: An Arizona Degree Is Worth It, Even With Debt Klein Announces She'll Step Down as Board of Regents President Governor Appoints New Arizona Regent Following Resignation of Chair
By posting comments, you agree to our
AZPM encourages comments, but comments that contain profanity, unrelated information, threats, libel, defamatory statements, obscenities, pornography or that violate the law are not allowed. Comments that promote commercial products or services are not allowed. Comments in violation of this policy will be removed. Continued posting of comments that violate this policy will result in the commenter being banned from the site.