× CORONAVIRUS: The latest coverage and local resources regarding COVID-19 from the Arizona Public Media newsroom.
/ Modified may 1, 2018 9:46 a.m. 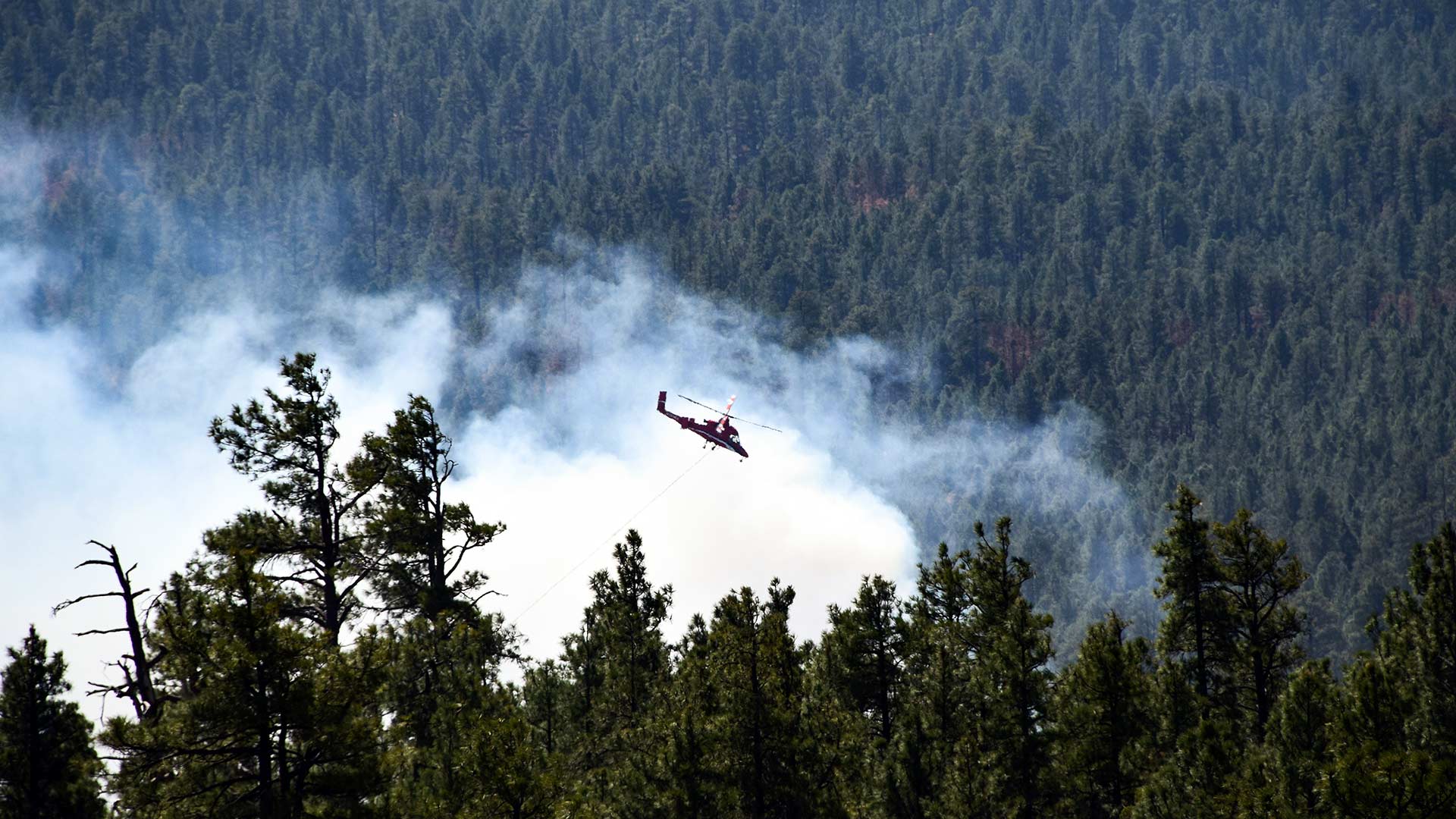 A wildfire in forest in north-central Arizona has grown to 17.8 square miles but improved weather conditions could help firefighters.

Scott says firefighters are trying to keep the fire from burning in one direction toward housing tracts and in another direction so that it doesn't enter a valley where it could burn for a long time.

Officials have estimated that the fire about 50 miles (80 kilometers) south of Flagstaff has burned 30 buildings and threatened about 1,000 homes and other buildings.

The fire is under investigation but believed to be caused by a human.

FLAGSTAFF — Firefighters battling a wildfire in north-central Arizona were hampered Monday by strong winds and dry conditions as residents of surrounding communities remained out of their homes for another day.

Authorities said some homes were lost as the wildfire consumed almost 14 square miles south of Flagstaff. Crews on Monday were assessing exactly how many structures have burned, but estimated around 30.

"We understand folks are worried about their homes, but we're still in firefighting, engaged in these communities," fire operations manager Jeremy Human posted in a video online. "And that's our primary mission ... to protect the existing structures and do what we can to stop the spread of the fire in those locations."

About half of Arizona is in the worst two categories of drought, a stark change from a year ago when only some areas were characterized as abnormally or moderately dry. The wildfire in Arizona is one of the most active in the country, according to the National Interagency Fire Center. Weather forecasters have warned the fire season will be dangerous and life-threatening. 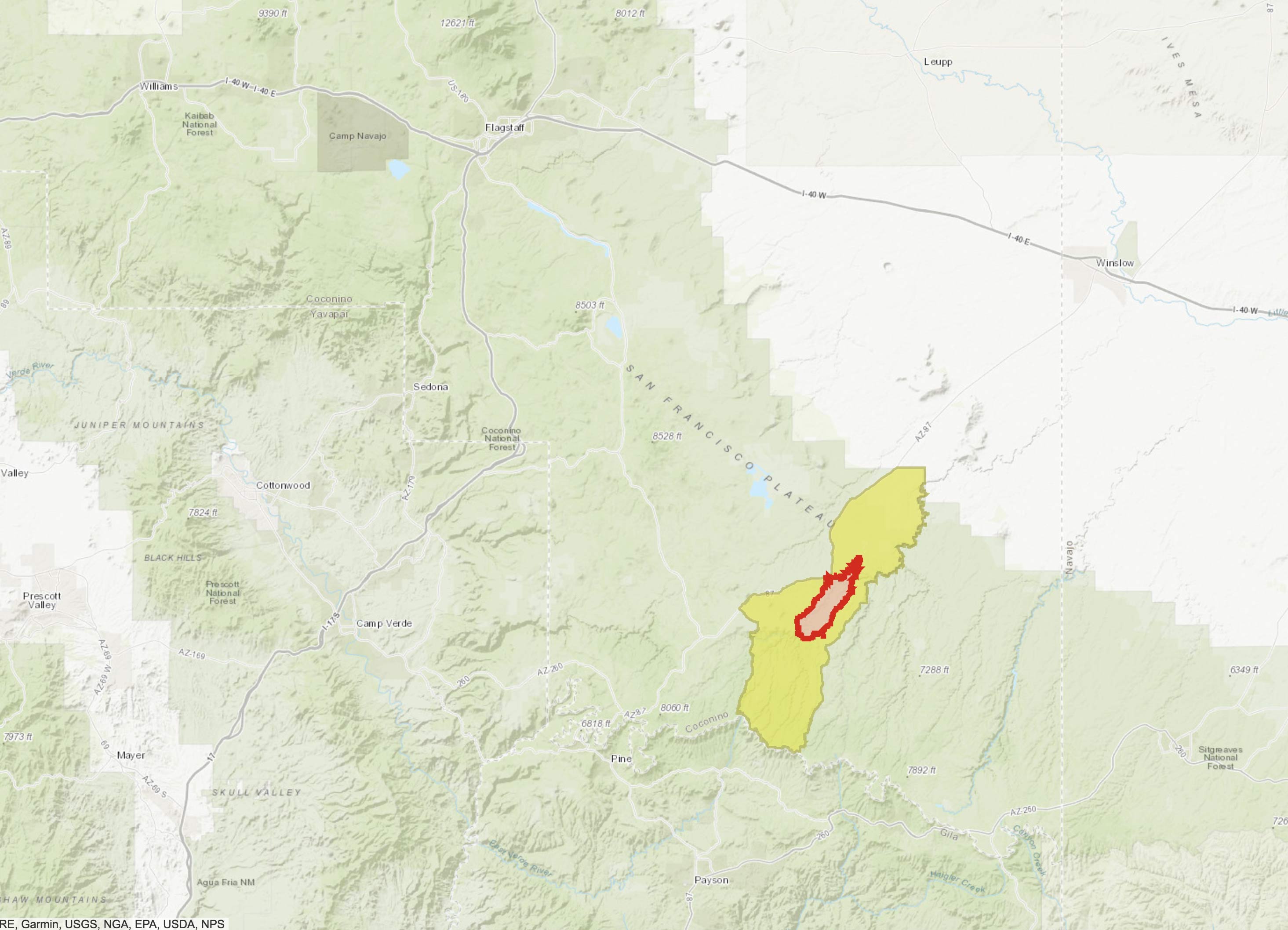 VIEW LARGER Image from a map indicating the size and location of the Tinder Fire the evening of April 30, 2018. Red represents the fire perimeter, and yellow is the control area.
Courtesy of National Interagency Fire Center

The wildfire started late last week, spotted from a watchtower overlooking the Coconino National Forest. It's expected to grow significantly, pushed by strong southwest winds to the northwest. The fire behavior should slow once it hits pinon and juniper trees, which don't hold heat as long as ponderosa pines, fire information officer Brian Scott said.

Coconino County authorities said an estimated 600 people were evacuated from about 1,000 homes in the area by Sunday night. Officials aren't sure when residents will be allowed to return home.

"It's not safe to turn people back to their homes and have another red flag blow embers and start another fire burning toward their home and make them re-evacuate," Scott said. "They're going to be cautious before they let them back in."

Winds were slightly calmer Monday than over the weekend, but firefighters won't get much relief until a storm moves in Tuesday and into Wednesday, National Weather Service meteorologist Tim Steffen said.

"With this system coming in and a lot moister air, that should help over the next few days," he said. "But after this storm, we're going to dry out again but with less wind."

Residents of nearly a dozen small communities were ordered to evacuate late Sunday. Several people stayed overnight at an American Red Cross shelter set up at the Navajo Nation's casino east of Flagstaff, Red Cross spokesman Colin Williams said. An animal shelter was set up at the Navajo County Fairgrounds in Holbrook, about 90 minutes east of Flagstaff.

Threats to churches, homes, businesses and communications towers prompted the Coconino County Board of Supervisors to declare a state of emergency late Sunday. Scott said about 1,000 structures are threatened by the fire, not all of them are homes.

The Federal Emergency Management Agency announced Monday it has approved the state's request to cover up to 75 percent of eligible firefighting costs. The state wrote to FEMA saying at least 1,000 people were under mandatory evacuations and 2,000 under voluntary evacuations. Arizona Gov. Doug Ducey also declared an emergency, freeing up $200,000 in state funding to help with the wildfire.

More than 500 firefighters and a handful of helicopters were working to control the blaze. Fire officials say it is human-caused. Investigators are working to determine exactly what sparked it.

Pinery Fire Burns 12 Acres SE of Willcox Managers Encourage Prevention Amid Growing Fire Seasons Fire Starts on Mount Lemmon
By posting comments, you agree to our
AZPM encourages comments, but comments that contain profanity, unrelated information, threats, libel, defamatory statements, obscenities, pornography or that violate the law are not allowed. Comments that promote commercial products or services are not allowed. Comments in violation of this policy will be removed. Continued posting of comments that violate this policy will result in the commenter being banned from the site.