Ducey: More Money for Schools, 'Above, Beyond Inflation' 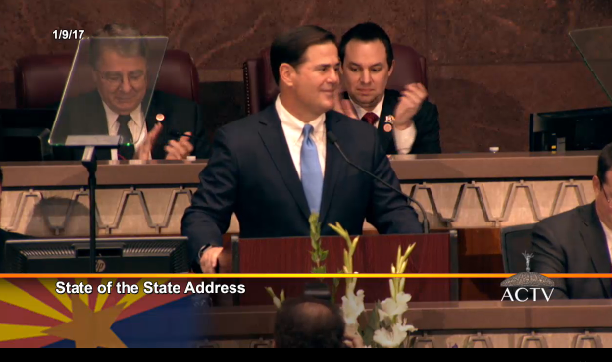 Ducey made the proposals in his third State of the State speech before a joint session of the Arizona Legislature, saying the state is beginning to move economically and must improve the educational system to support that.

"I have a commitment our educators can take to the bank: Starting with the budget I release Friday, I will call for a increased investment in our public schools - above and beyond inflation - every single year I am governor," the Republican said in prepared remarks.

Ducey said he would permit no tax increases while pushing his plan. He said his plan will build on last year's Proposition 123, which he pushed to voter approval for a higher percentage payout from the state Land Trust Fund.

In pushing the proposal last year, Ducey called it a first step in improving funding for public education, which tooks cuts some estimated at more than $1 billion - or about $1,000 per student - during the depths of the recession.

Ducey did not say where the dollars will come from for his plans except to refer to his budget proposal, due out Friday, and to the state's current positive revenue situation.

Legislative leaders have said they want to spend more on education, too, but they do not know how much or from where it will come.

Also in his speech, Ducey said:

School Vouchers Bill Moves to Full Arizona Senate State of the State and a Schools-Focused Budget Education the Centerpiece of Ducey's $9.79 Billion Budget
By posting comments, you agree to our
AZPM encourages comments, but comments that contain profanity, unrelated information, threats, libel, defamatory statements, obscenities, pornography or that violate the law are not allowed. Comments that promote commercial products or services are not allowed. Comments in violation of this policy will be removed. Continued posting of comments that violate this policy will result in the commenter being banned from the site.