"I have the opportunity to make my voice heard not only as a Hillary Clinton supporter, but also as an artist who lives on the border." by Vanessa Barchfield Tweet 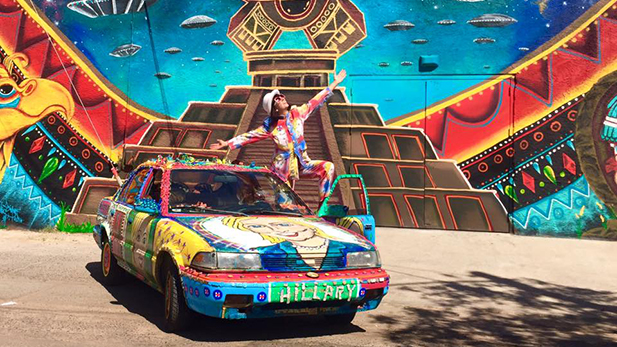 Bisbee-based artist Gretchen Baer may just be one of the brightest Hillary Clinton fans in the country but even she’s eclipsed by her car.

"I have a 1989 Toyota Corolla that is completely covered in portraits of Hillary," she said. " All kinds of jewels and gems and toys that I’ve collected over the years. And so it’s just a sparkly piece that makes people smile."

Worried her 27-year old car might not make a trip across the country, she shipped the Hillcar in an auto carrier and flew out to meet it in the final furious campaign days before the New York primary.

"I decided to do it because I realized that I have the opportunity to make my voice heard not only as a Hillary Clinton supporter, but also as an artist who lives on the border."

Baer runs Border Bedazzlers, a program for kids in southern Arizona and northern Sonora to paint the border wall that separates them.

She said she is bringing a message about the importance of having a good relationship with Mexico, and she wants people to know that art can change the world.

The Big Apple response to her Hillcar?

"Thumbs up everywhere," she said. "I wasn’t sure in the city how that was going to go. But everywhere we drive, which we’re all over the city. We’ve been from top to bottom and we’ve been into the Bronx, Queens, Brooklyn. We’ve been all over the place already and everyone loves it."

And she said it’s not just Clinton fans - she’s gotten those enthusiastic thumbs up from Sanders’ supporters too. 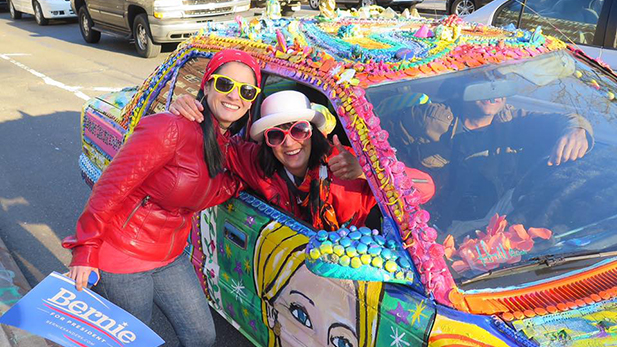 From New York, Baer will hit the road in Hillcar for more campaigning in Connecticut, Rhode Island, Pennsylvania and Maryland.

They'll both be back in Bisbee by the end of the month.

Music Will Transcend Border at Douglas-Agua Prieta Concert Trump, Clinton Win Arizona Presidential Primary Election Walk, Listen, Learn: A New Way to Tour Historic Bisbee
By posting comments, you agree to our
AZPM encourages comments, but comments that contain profanity, unrelated information, threats, libel, defamatory statements, obscenities, pornography or that violate the law are not allowed. Comments that promote commercial products or services are not allowed. Comments in violation of this policy will be removed. Continued posting of comments that violate this policy will result in the commenter being banned from the site.