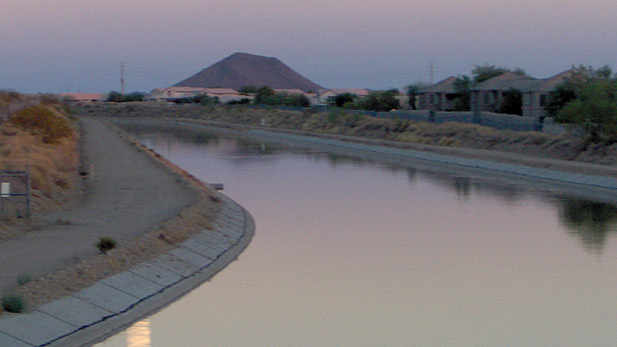 A portion of the Central Arizona Project canal, near Scottsdale, AZ.

Water issues fill the agenda for the Arizona Town Hall meeting that started Sunday in Mesa.

The meeting is a statewide effort to draft a report addressing water resources in the state, including recommendations for future use.

“We’re under mandates or the need to provide water conservation, but at the same time the selling of water is what brings us the revenue to operate the system,” Simonton said. “So it’s a catch-22 for us.”

Yuma participants provide the perspective of an economy with a heavy reliance on both agriculture and water from the Colorado River.

“[Without agriculture] this whole town would dry up and disappear,” said Bruce Gwynn, director of the Yuma Fresh Vegetable Association. “I’m sorry, that’s just the way it’d be when you take away your prime source of making a living.”

Gwynn sees the town hall as an opportunity to describe farmers’ efforts to increase water efficiency, as well as to hear pressing concerns from other parts of the state.

Just across the Colorado River, Jeff Kightlinger manages the Metropolitan Water District of Southern California, which covers six counties and includes San Diego and Los Angeles. He’s attending the town hall as an invited speaker and says his goal is to see more discussions about water among Western states.

“We’re using more than is coming in, we can’t keep doing that. It’s simply not sustainable,” Kightlinger said. “We’re going to have to sit down with each other as the basin states on the Colorado River and come up with a long-term plan.”

The final Arizona Town Hall report will be published online after the meeting.

Utah Wants to Pipe Water 140 Miles from Lake Powell Flowing Water On Mars Opens Door For New Exploration Flake Looks to Safeguard Arizona's Water Allotment
By posting comments, you agree to our
AZPM encourages comments, but comments that contain profanity, unrelated information, threats, libel, defamatory statements, obscenities, pornography or that violate the law are not allowed. Comments that promote commercial products or services are not allowed. Comments in violation of this policy will be removed. Continued posting of comments that violate this policy will result in the commenter being banned from the site.