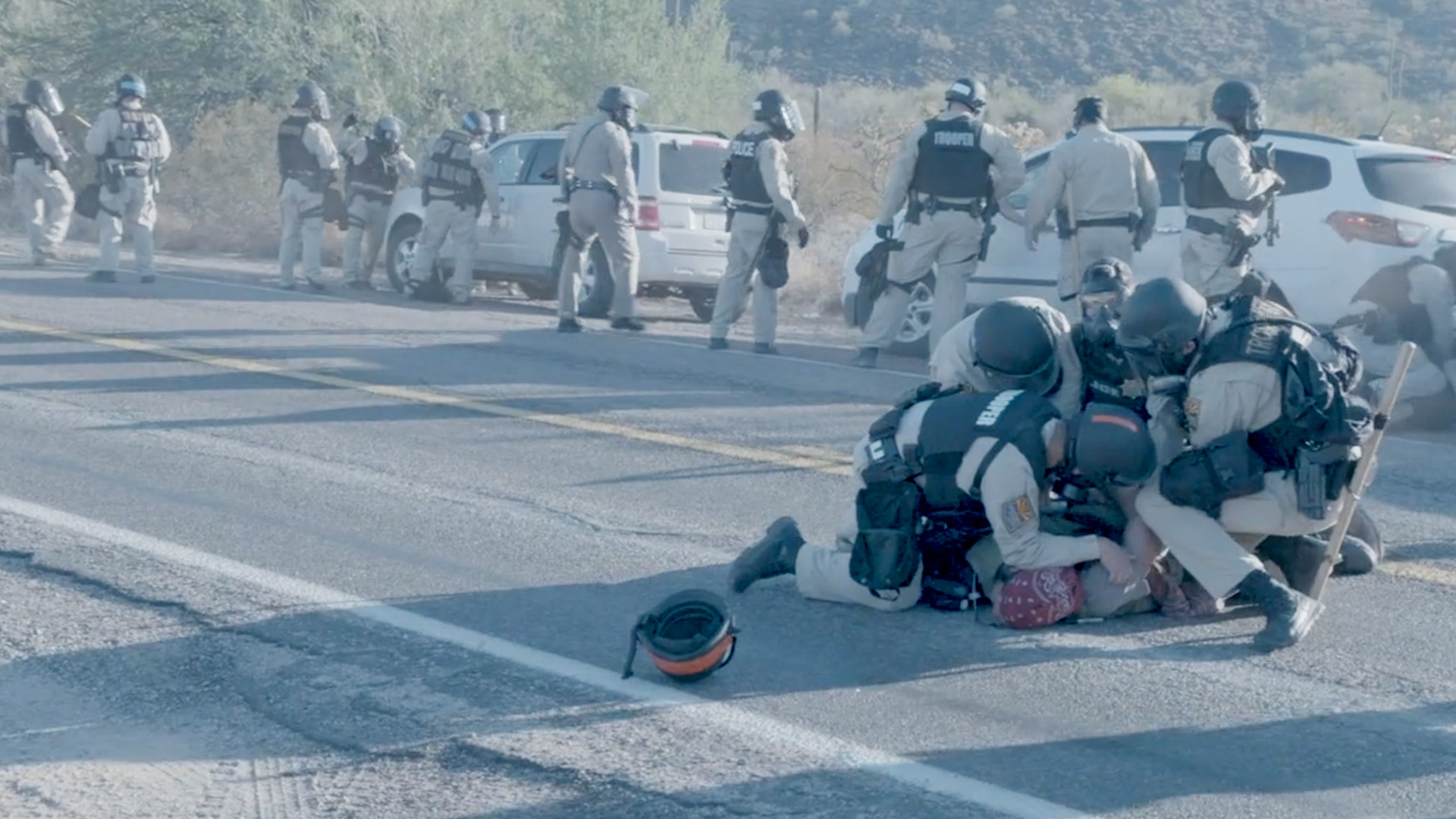 Indigenous-led demonstrators say they were subject to tear gas, rubber bullets and arrests Monday morning during a nonviolent protest against border wall construction at a Border Patrol checkpoint in western Pima County.

The checkpoint is located less than 30 miles from the Lukeville Port of Entry on Highway 85. About 30 demonstrators spread out in front of the site early Monday, blocking traffic from both sides and holding banners reading "Respect the land," "Stolen Land," and "No one is illegal."

The action is the latest in a series against wall construction and surveillance on ancestral Indigenous land.

One Tohono O’odham organizer who gave the name V said demonstrators were praying and singing for over an hour before officers began firing tear gas and rubber bullets into the crowd. A video shared by the group shows more than a dozen Arizona State Troopers pressing into a crowd with batons as plumes of smoke rise into the air.

Similar demonstrations have been ongoing since this summer, organized by a network of Akimel O'odham, Tohono O'odham and Hia-Ced O'odham organizers called Defend O'odham Jewed and O'odham Anti-Border Collective. Not all those tribes are federally recognized, but have ancestral land that spans central and southern Arizona.

An Arizona DPS spokesman said the agency needed more time to answer questions, but confirmed some arrests were made. In an email Tuesday night, the spokesman said eight adults and three minors were taken into custody. He said troopers deployed smoke canisters, tear gas and "less-lethal" impact munitions because protesters failed "to comply with a lawful order."

Eight adults who were arrested were taken to the Pima County Jail in Tucson. Supporters gathered there Monday evening to await their release. Charges have not been announced.

Demonstrations have centered on Quitobaquito Springs, a freshwater source and pond along the border in Organ Pipe National Monument that's part of the Hia-Ced O'odham traditional homeland. Park service officials closed the road to Quitobaquito amid mounting demonstrations there as wall construction advanced.

V said the 30-foot steel bollard wall now extends beyond the site, and O’odham will keep organizing as long as construction continues.

"We're continuing to mobilize as people, as Indigenous people and as allies, because of this continued desecration," she said. "They're not going to stop, we won't stop."

On Friday, around 100 people showed up for a rally in Tucson where O’odham speakers described how border surveillance had changed their communities.

This week the Trump administration announced 360 miles of border wall were complete. On Saturday, a federal appeals court ruled the administration's use of $3.6 billion in military funds for construction was illegal.

Monday's demonstration comes on the heels of an Indigenous People's Day celebrated by a dozen states and more than 100 cities across the U.S. In a statement sent to media, organizers asked supporters to mobilize to protect sacred sites like Quitobaquito.

"Everyday is Indigenous People's Day," the statement read. "We are here to remind the world that this is, was and always will be Indigenous O'odham land, and we will do what is necessary to protect it."

This story was updated Tuesday afternoon based on new information provided by DPS, including the number of people arrested. An earlier version of the story reported a number provided by Customs and Border Protection.

News roundup: TEP renewables and rate changes, border security amid pandemic News roundup: Arizona closes in on voter registration and census deadlines Border apprehensions down, nearly 200k returned to Mexico under COVID-19 policy
By posting comments, you agree to our
AZPM encourages comments, but comments that contain profanity, unrelated information, threats, libel, defamatory statements, obscenities, pornography or that violate the law are not allowed. Comments that promote commercial products or services are not allowed. Comments in violation of this policy will be removed. Continued posting of comments that violate this policy will result in the commenter being banned from the site.