On Friday, the Interior Department began the process of revising existing guidelines for water management in the Colorado River basin. by Luke Runyon, KUNC Tweet 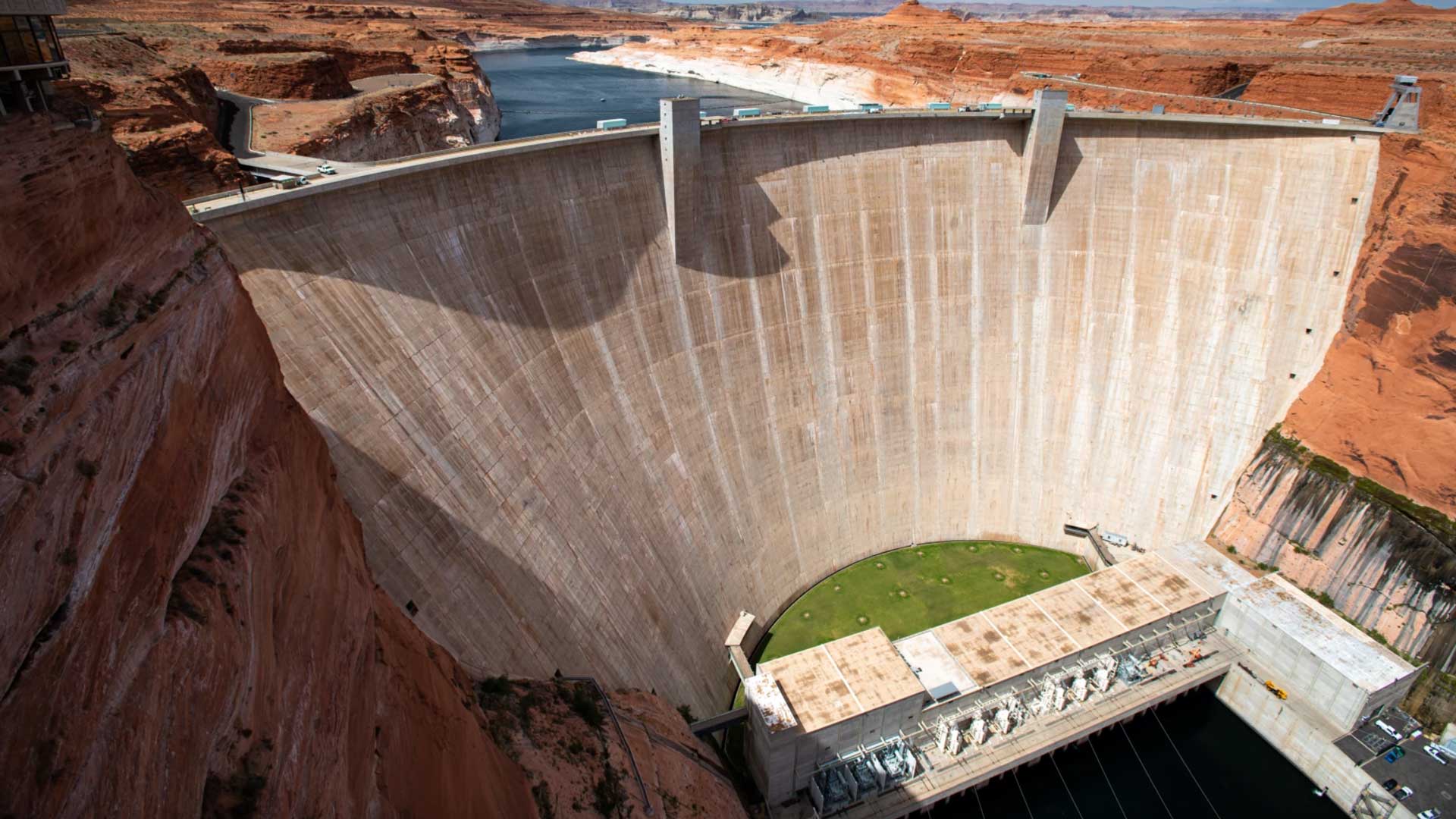 Water levels are at record lows and still dropping in the nation's largest reservoirs. The federal government began the process of restricting water releases from Glen Canyon Dam, which holds back a shrinking Lake Powell.
Luke Runyon/KUNC

The federal government wants the ability to restrict the amount of water released from the nation’s largest reservoirs, Lake Mead and Lake Powell, in 2023 and 2024. On Friday, the Interior Department began the process of revising existing guidelines for water management in the Colorado River basin. The river, which supplies 40 million people across the Southwest, is strained by a supply-demand imbalance and will likely shrink further due to climate change.

The Bureau of Reclamation, which manages dams at those reservoirs, filed a Notice of Intent Friday to propose changes to water releases. An upcoming Environmental Impact Statement will contain the details of those changes. The Bureau’s plans will tweak river management rules drawn up in 2007 in response to declining reservoir levels at that time.

Those rules, known as the “Interim Guidelines” were meant to last until 2025. These potential changes to water released from the dams will join a patchwork of temporary reductions and conservation agreements that have been deployed to pull the basin back from the brink of catastrophe. Ongoing dry conditions brought on by warming temperatures have worsened beyond the expectations of many water managers, and steady demand is sapping the shrinking supply. States that use water from the Colorado River are due to rewrite management guidelines by 2026, when the current set expires.

“Today’s action brings new ideas and necessary measures to the table as we consider alternatives to revise operations to better protect [the] Colorado River System in the near term while we also continue to develop long-term, sustainable plans that reflect the climate-driven realities facing the Colorado River Basin,” said Bureau of Reclamation commissioner Camille Calimlim Touton in a press release.

The federal government has expanded its role in river management throughout the past year. Historically, Colorado River management decisions were largely left to the seven states that use its water, but worsening drought and state reluctance to cut back on demand ushered in more direct federal intervention. This summer, the Bureau of Reclamation threatened to force unprecedented cutbacks, but did not follow through after states failed to meet a federal deadline. Later, the Bureau launched a conservation program through which it will pay farmers to use less water using a chunk of the $4 billion it received from the Inflation Reduction Act.

“The Interior Department continues to pursue a collaborative and consensus-based approach to addressing the drought crisis afflicting the West,” said Interior secretary Deb Haaland. “At the same time, we are committed to taking prompt and decisive action necessary.”

These tweaks are pitched as a means of making sure water can pass through Glen Canyon Dam normally. Dropping water levels in Lake Powell have threatened hydropower production at the dam, which supplies electricity to roughly 5 million people across seven nearby states. Lower levels mean lower power output, and if levels drop so low that air enters the hydroelectric turbines, they could be damaged.

Beyond hydropower worries, some have raised concern that water from Lake Powell may soon be unable to pass through rarely-used pipes in its dam at a sufficient rate, jeopardizing the flow of water to millions of people who depend on it downstream. The lowest set of pipes — which would serve as the only exit route for water once levels fall past 3,430 feet in elevation — are not big enough to carry sufficient water for the Upper Basin states of Colorado, Wyoming, Utah and New Mexico to satisfy their legal obligation. Lake Powell was at 3,529 feet at the end of September.

Lake Mead, which stores water for the Lower Basin states of California, Arizona and Nevada, is filled with water released from Lake Powell. Because of that, any changes at Lake Powell would be felt at Lake Mead and the section of Colorado River between the two, which primarily flows through Grand Canyon National Park. Reclamation says it may modify releases at the Hoover Dam, which holds back Lake Mead, “in order to protect Hoover Dam operations, system integrity, and public health and safety.”

Restricted releases for the Lower Basin would mean water users in California, Arizona and Nevada would have to conserve further.

Insects find a new home on Santa Cruz River Biden signs water bills benefiting 3 tribes in Arizona California holdout in agreement over Colorado River cuts
By posting comments, you agree to our
AZPM encourages comments, but comments that contain profanity, unrelated information, threats, libel, defamatory statements, obscenities, pornography or that violate the law are not allowed. Comments that promote commercial products or services are not allowed. Comments in violation of this policy will be removed. Continued posting of comments that violate this policy will result in the commenter being banned from the site.