The Boneyard helps create a digital twin of a fighter jet

The Air Force and Wichita State students are working together on the project. by Christopher Conover Tweet 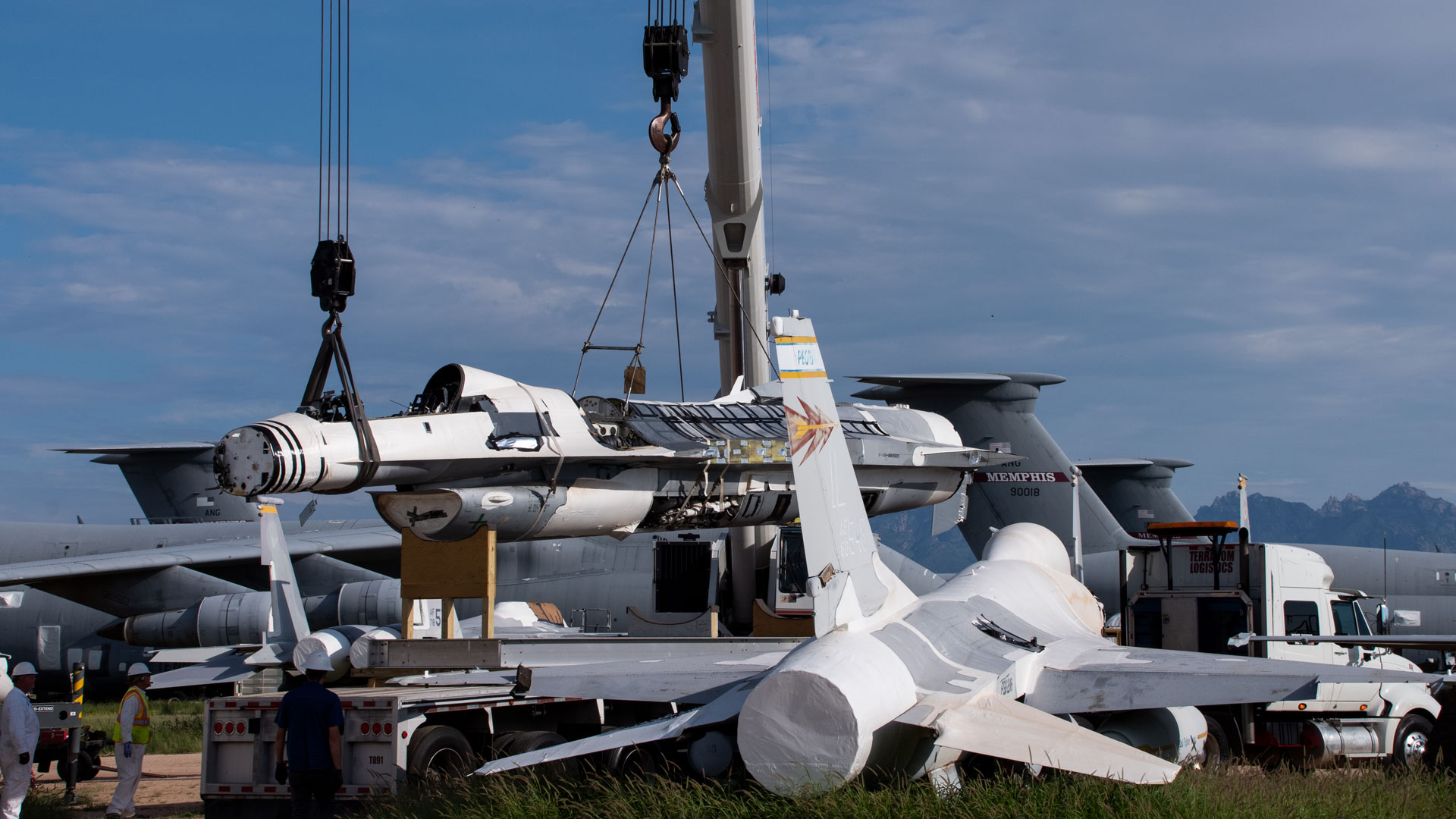 An F-16 is loaded on a truck at AMARG in Tucson for a trip to Wichita State University and the National Institute for Aviation Research. The plane will be used to make a digital twin for the U.S. Air Force. August 2021
Christopher Conover/AZPM

The F-16 is the most plentiful aircraft in the U.S. military and the world according to a new report, World Air Forces and that means the Air Force has no plans to get rid of it soon.

At the 309th AMARG, better known as The Boneyard, two of the planes stored in the desert are getting a new life that will help maintain and advance the plane.

“The Air Force is building a digital twin of the F-16,” said Col. Neil Aurelio, AMARG commander. “So AMARG is providing the hardware to make it happen.”

The Boneyard sent two F-16s to Wichita State and the National Institute for Aviation Research (NIAR) for the digital twin project.

A digital twin means NIAR is taking 2-D drawings of the plane and moving them into the 3-D world.

“If you watch the movie Ironman and you see the Jarvis computer and all the images he’s throwing around, we’re generating the engineering data to do something like that, to do the visualization that they do in that movie,” said Melinda Laubach-Hock, Ph.D. with Wichita State and NIAR.

Making the three-dimensional model of a fighter plane is a painstaking process.

“We take the airplane apart piece by piece so all the fasteners will come out down to the very detail part level, clean the parts up to get off all the paint and sealant, and then we scan them using high fidelity scanners, to generate a point cloud, and then we use a 3-D CAD modeling software to make a solid model and then we take all the solid models and reassemble them to the digital air vehicle model,” said Laubach-Hock.

Air Force officials said there is a practical reason for making a digital twin even though there are plenty of F-16s in the inventory.

“If someone wanted to make some home improvements, let’s say they wanted to introduce some new technology into the kitchen. And that may cause changes for where the counter space is at or where the walls at you know better than drawing it on paper before you get your sledgehammer out wouldn’t it be better with a computer to really optimize how that new piece of technology is going to optimize into your kitchen,” said. Col. Tim Bailey with the F-16 Program Office. “That’s what we are doing with this particular fighter airplane. You know it is a fielded aircraft, it’s been in the field for quite a while, but we never stop making improvements to our weapon systems and so what the digital twin allows us to do is use more of a computer-based model for any future upgrade work or any major repairs to the aircraft to really design that out to see what will the impact be on how it will fit in the aircraft, the impact on the cooling system for the aircraft, on the power load. It lets us have those things thought through upfront before we go out to an aircraft and make those changes."

The digital twin program also allows the military to catch up with private industry that is making the planes.

The changing nature of the industry is what excites Laubach-Hock because it gives students a chance to work on the cutting edge of technology.

“We have an applied learning program at Wichita State where we want students to get things that you don’t learn in a classroom, so we pair them up under close supervision of a very seasoned person and teach them how to do digital engineering,” she said.

The program is not limited to students at the university.

“Another thing we are doing with the students that is pretty revolutionary is that we’ve taken this CAD software and put it in the hands of junior and senior high school students. So, they’re getting in the high school so they’re getting dual credit, college and high school, and then they’re coming and working on our program so when you see a senior working on our programs they may have six full years of experience and then they go out into the industry and they have a very good foundation so they aren’t entering the workforce as entry-level anymore,” said Laubach-Hock.

The F-16 digital twin project is not the only one at NIAR. They also are working on Blackhawk helicopters and B-1 Bombers.

A-10 part of Defense spending in Arizona Davis-Monthan big part of A-10 future With uncertainty around A-10’s future, a look back at its history at Davis-Monthan
By posting comments, you agree to our
AZPM encourages comments, but comments that contain profanity, unrelated information, threats, libel, defamatory statements, obscenities, pornography or that violate the law are not allowed. Comments that promote commercial products or services are not allowed. Comments in violation of this policy will be removed. Continued posting of comments that violate this policy will result in the commenter being banned from the site.