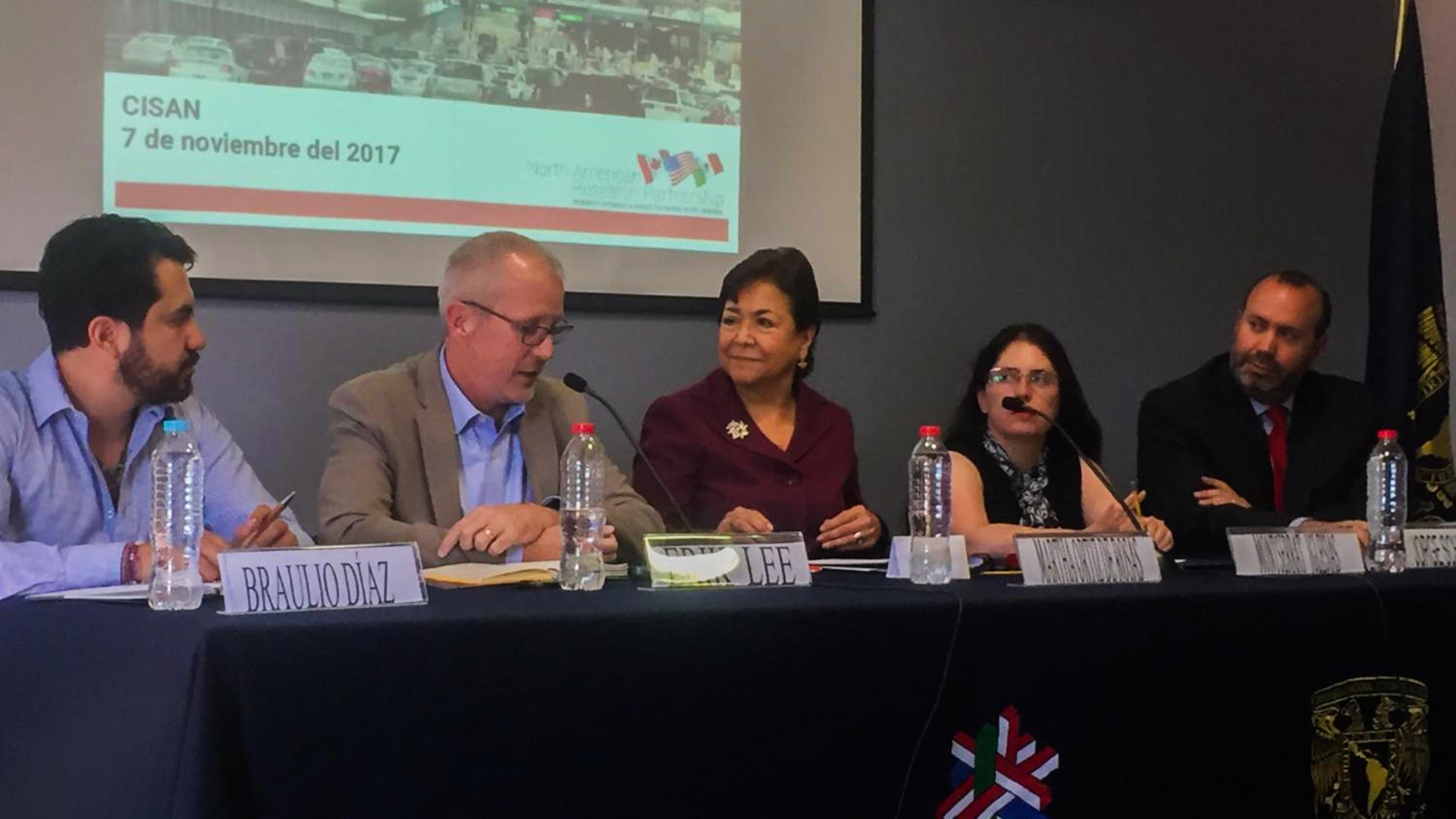 Erik Lee, second from left, from the North American Research Partnership was among the experts at the Centro de Investigaciones Sobre América del Norte at the National University of Mexico.
Rodrigo Cervantes, Fronteras Desk

Arizona and the Mexican state of Sonora have built a strong relationship during their current administrations, known as the “megaregion."

But next year’s elections in both states endanger their political and economic ties. At a conference in Mexico City, researchers agreed that the current alliance between Arizona and Sonora has increased shared policies, strategies and trade.

Govs. Doug Ducey and Claudia Pavlovich Arellano have been strong promoters of the megaregion. But there might be a game changer for their signature bilateral project next year.

“I think that the next several months leading up to the midterm elections in the United States will be absolutely critical to see where do we head from here,” said Erik Lee, executive director of the North American Research Partnership, a Phoenix-based nonprofit organization focused on trade.

Lee thinks one of the main problems of the megaregion is its strong dependency on the current administrations. No other sectors are fully involved and there are no mechanisms that could guarantee its continuity.

Esther Ponce Adame agreed with Lee. She is the managing director of the Center of International Cooperation for Development, a research organization based in Mexico City.

“Arizona and Sonora have built some sort of ‘marriage,’ what they call the megaregion, that is exemplary to other border states. But international affairs are still too attached to political will,” Ponce said.

The Mexican researcher thinks that the ties between both states might break with the next administrations, as nothing ensures that the agreements made by the local governments will continue.

Both Lee and Ponce met with other specialists at the Center for North American Research (CISAN) at the National University of Mexico.

Most of the attendants agreed that locally driven international treaties will prevail and continue to grow despite the existence of larger national agreements, although their duration and effectiveness might be too volatile.

Mexico's Sonora Prepares for Seasonal Visitors from the US Arizona's Sluggish-Port Reputation Hurting Cross-Border Trade After Trump is Inaugurated, Sonora to Host ‘Megaregion’ Business Summit
By posting comments, you agree to our
AZPM encourages comments, but comments that contain profanity, unrelated information, threats, libel, defamatory statements, obscenities, pornography or that violate the law are not allowed. Comments that promote commercial products or services are not allowed. Comments in violation of this policy will be removed. Continued posting of comments that violate this policy will result in the commenter being banned from the site.