The school currently lacks the funding to send to Super Nationals all of the kids who qualified. by Laurel Morales, Fronteras Desk TWEET SHARE 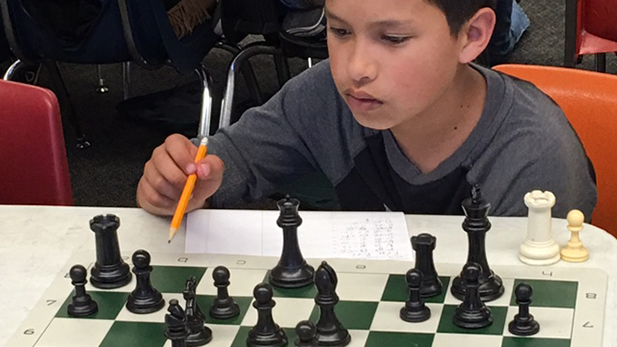 Diego Avitia, a fourth grader, has earned the right to go to Super Nationals but the team is short the funding. His little sister is on the list of students who are going.
Laurel Morales, Fronteras Desk

Chess is a quiet sport.

Fifty young kids — ages 5 to 11 — recently sat across from each other in a classroom after school. They concentrated on their next moves. Coach Ted Komada burned enough energy for all of them. He paced up and down the rows, threw his arms up in the air and spouted strategy.

“You’ve got a rating,” Komada told the kids. “Your rating is a number that says, ‘This is how good you are.’ Your job is to make that rating wrong. Be better than that rating.”

It’s clear Komada really believes in these kids and sees chess as more than just a game.

“You decide whether you want to attack queen side, king side, attack with a knight or a bishop, find that pin, use the pin,” Komada said. “I love chess because it makes me feel powerful because I’m in control. Those are my pieces. I get to decide what I do with them, how I use them to complete my goal, right? I control that. I mean there’s not too many things in life that you have complete control over. Chess is one of them.” 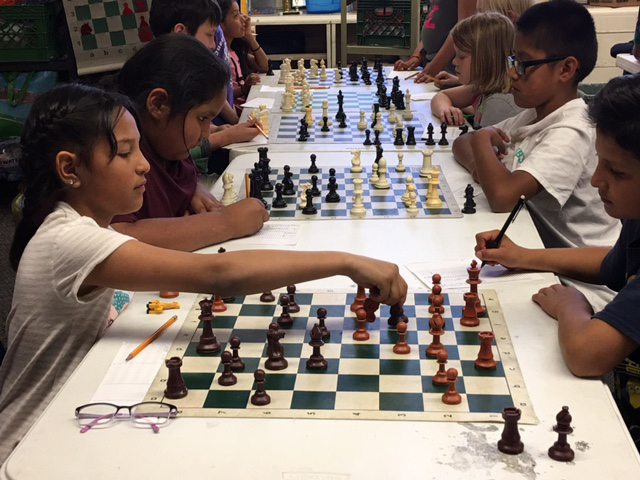 And the children who go to Killip Elementary may not have much control. The school has the highest number of kids from low-income families in Flagstaff.

Police are frequently called to the neighborhood for drug and gang activity. A month ago a young man was shot just down the street from the school during chess practice.

Forty six students have earned the right to go to a national competition in Nashville, Tennessee, May 11. But some won’t make it, if the team can’t raise enough money. 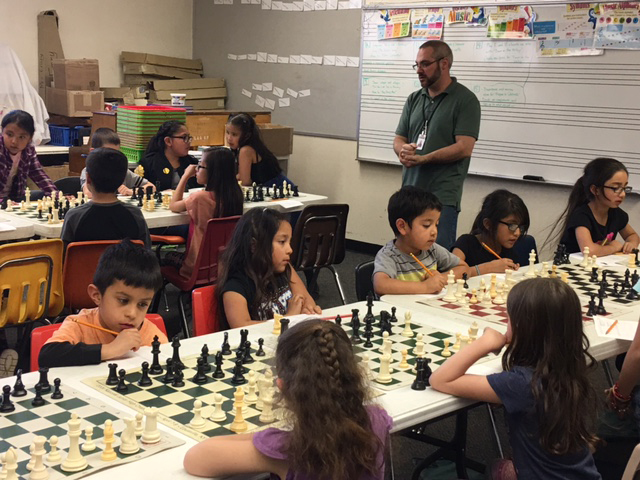 VIEW LARGER Coach Ted Komada is still working on raising enough funds to send all 46 kids who have qualified for nationals. He said, “You have two kids sitting right next to each other playing each other all year long. One wins. The next day the other one wins. You have to tell one of them, ‘Sorry, you don’t get to go, but you do.’ It’s not right and it’s not fair.”
Laurel Morales, Fronteras Desk

James Haynie is a coach and a parent of four kids who have played on the chess team.

“I see chess for a lot of these students as a place to come where they feel safe. They know that the ones around them won’t hurt them,” Haynie said. “They know the coaches are always going to be there.”

The chess team started out as a diversion for kids after school 15 years ago. Eight of those years, Killip held the state title.

This will be the team’s third time to Super Nationals. The Olympics of chess, as it's sometimes called, takes place every four years. A total of 5,000 kids are expected to attend. The last time they went Killip placed third in the nation. Ten-year-old Skylar Boyce remembers.

“It was tons of kids!” Boyce said.

Boyce smiled, showing his green and blue braces. This year he wants to place first.

“It’s fun and you get to learn stuff, like stuff that helps you in the real world,” Boyce said.

Stuff like focus and problem-solving skills. For 13-year-old Karen Marcado, chess showed her she was capable of much more than she believed.

“It just actually helped me push myself,” Marcado said. “And back then I would like not even pay attention. But since, coming to chess got me focused on what I was actually doing.”

Marcado has taught many of the younger kids to play and is excited to watch them compete in Nashville. Pam Jensen’s eyes welled up with tears when she thinks about what chess has done for her son.

Parents like Michelle Pedilla said they love the real-life skills their kids are getting from chess.

“Coach Komada here likes to teach them that you want to think about your move before you do it because it might give you a consequence of, ‘Oh, you lost a piece,” Pedilla said. “So in real life they teach them to slow down and think of what they’re going to do before they do it, so that way they can think about a consequence like, hmm, should I do that? It might get me in trouble. They look two, three, four moves ahead. Not just one move.”

Pedilla got emotional, too, when she thought about the team walking into a competition.

“To travel with these guys and see us come as this big ol' blue group, blue shirts,” Pedilla said. “I very much am a proud mother.”

Coach Komada needs to raise $35,000 to send all 46 kids who have qualified to nationals next month. He’s still $4,000 short and has started a GoFundMe page to send the team to Nashville.

Limited Housing Inventory, and Space to Grow, Pushes Up Prices in Flagstaff Schools Supe Douglas Proposes Sales Tax Increase to Boost Teacher Salaries Breathing Room: Asthma Inhalers OK in State's Schools
By posting comments, you agree to our
AZPM encourages comments, but comments that contain profanity, unrelated information, threats, libel, defamatory statements, obscenities, pornography or that violate the law are not allowed. Comments that promote commercial products or services are not allowed. Comments in violation of this policy will be removed. Continued posting of comments that violate this policy will result in the commenter being banned from the site.