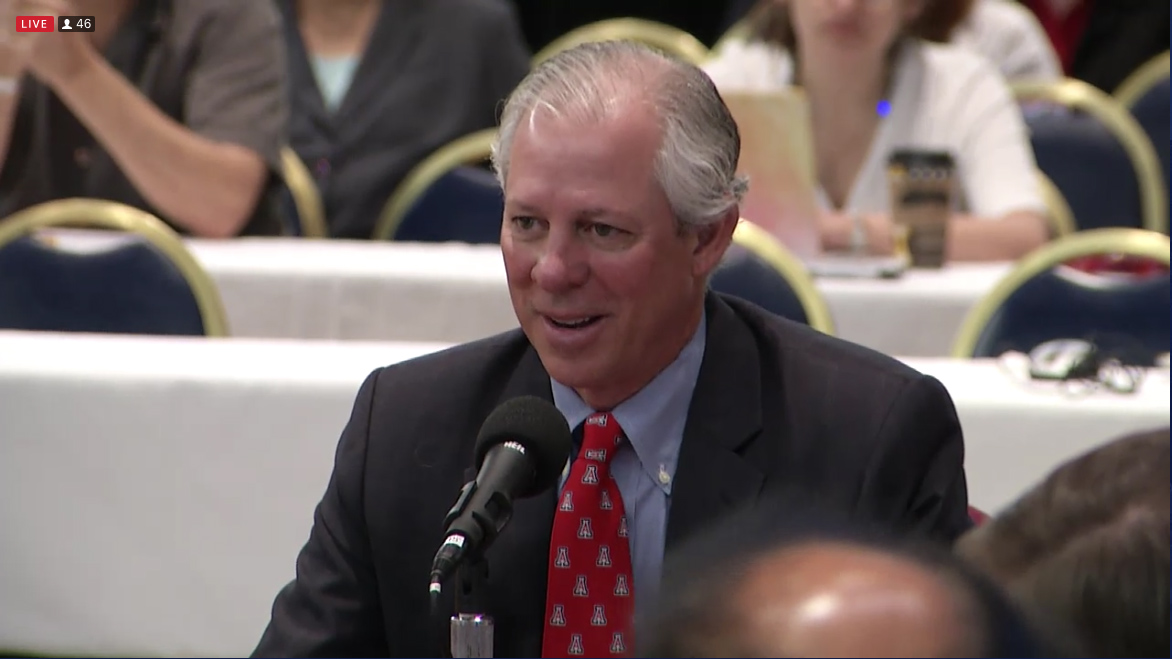 Robert Robbins at the Arizona Board of Regents meeting where his contract was approved, April 7, 2017.

The Arizona Board of Regents approved a nearly $1 million total compensation package Friday for Robert C. Robbins, who will begin as University of Arizona president June 1.

Robbins will leave his post as president and CEO of Texas Medical Center to take the UA position.

He will be the highest-paid UA president. By comparison, Ann Weaver Hart, who will be president until May 31, earns a base salary of $475,000. Robbins' base pay is set at $600,000. Robbins will also collect an annual $80,000 in car and housing allowances, $200,000 privately funded endowed leadership chair position, and a $108,000 pension. As any other full-time UA employee, he will receive medical and retirement benefits.

Regents President Eileen Klein said Robbins will also be eligible for performance incentive pay for meeting goals each year, a structure similar to that for Hart and the other two state university presidents.

Robbins was a finalist along with Arizona State University's Sethuraman Panchanathan. The regents selected Robbins as the sole finalist last month, and he made a campus visit before they negotiated the terms of his contract.

During that visit, he asked the University of Arizona community to hold him accountable, and said he would like to serve in the position for a decade, if possible.

New UA President Robbins Considers Safety in Free-Speech Issues UA President Robbins: 'I'm Going to Be Accessible' Hundreds Greet New UA President at Campus Reception
By posting comments, you agree to our
AZPM encourages comments, but comments that contain profanity, unrelated information, threats, libel, defamatory statements, obscenities, pornography or that violate the law are not allowed. Comments that promote commercial products or services are not allowed. Comments in violation of this policy will be removed. Continued posting of comments that violate this policy will result in the commenter being banned from the site.