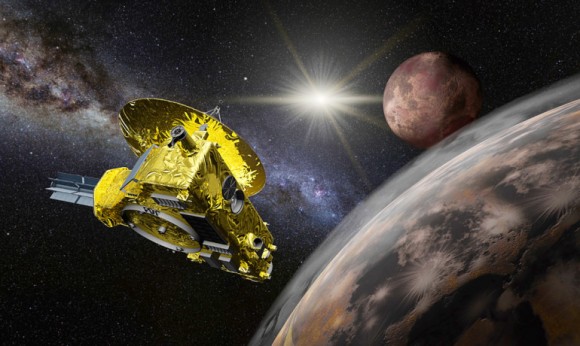 Space scientists are expecting big news from the far reaches of the solar system this weekend, as NASA’s New Horizons spacecraft makes its closest approach to Pluto.

New Horizons will glide past the dwarf planet at a distance of 7,750 miles Tuesday morning, after a nine-year, 3 billion-mile journey.

It is the first unmanned space traveler to visit Pluto, which was still classified as a true planet when New Horizons was launched in 2006.

Mark Sykes, CEO of the Tucson-based Planetary Sciences Institute, said Pluto’s demotion did not dampen anticipation for this historic encounter.

“It’s because we’re driven by science,” commented Sykes. “There are some astronomers with the International Astronomical Union who don’t think it’s a planet because they’re looking at it from a standpoint of how it affects other objects around it.”

Sykes says instead, planetary scientists like himself focus on similarities between Pluto and planets like Mars and the Earth.

New Horizons gave scientists a scare when its on-board systems went into a temporary “safe mode” last week. Mission planners said the problem happened because they gave the spacecraft too many commands to be executed at once. Programmers returned New Horizons to normal and it began transmitting data and daily photographs on Wednesday.

UA Scientists View Historic Photos of Flyby at Edge of Solar System Dwarf Planet Ceres Gaining New Attention From Scientists Amateur Astronomers Help Map Kuiper Belt
By posting comments, you agree to our
AZPM encourages comments, but comments that contain profanity, unrelated information, threats, libel, defamatory statements, obscenities, pornography or that violate the law are not allowed. Comments that promote commercial products or services are not allowed. Comments in violation of this policy will be removed. Continued posting of comments that violate this policy will result in the commenter being banned from the site.