Jewell says during recent visit cooperation of 7 Colorado Basin states key to save source of water, electricity to much of Southwest. TWEET SHARE 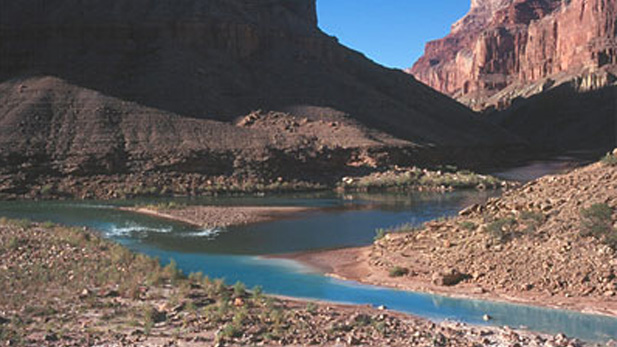 Interior Secretary Sally Jewell says it will take the cooperation of the seven Colorado Basin states to ensure the Glen Canyon Dam thrives.

The Glen Canyon Dam is one of several dams on the Colorado River that are critical in supplying water and electricity for much of the Southwest’s cities and farms.

"And they all have people that want the water and there hasn’t been enough water to go around lately. Lowest flow rate into the Colorado River in these last 14 to 15 years that we’ve seen over a 1200 paleorecord," Jewell said during a visit to the dam this past weekend to celebrate its 50th anniversary.

The Department of the Interior recently released a study that showed there’s going to be a significant shortfall between the Colorado River’s supply and demand in the coming decade. And it’s going to be compounded by climate change.

The states, federal agencies, tribes and other stakeholders are part of a group that makes recommendations on how to manage the river.

For the last five years, Assistant Secretary Anne Castle has been a part of that group. She said the Colorado River is the most volatile, the most dammed, the most litigated and now the most threatened river in the United States.

"We have to operate this dam in a way that’s sensitive to the fact that 40 million people in the Southwest depend on this dam, whether they know it or not, but they’re counting on us to get that balance right," she said.

The group plans to release a Glen Canyon Dam management proposal this winter that addresses drought and climate change.

Danger of 250-Ton Rock Collapse at Dam Reduced Bringing the Colorado River Delta Back to Life Morelos Dam Water Begins Flowing Into CO River Delta
By posting comments, you agree to our
AZPM encourages comments, but comments that contain profanity, unrelated information, threats, libel, defamatory statements, obscenities, pornography or that violate the law are not allowed. Comments that promote commercial products or services are not allowed. Comments in violation of this policy will be removed. Continued posting of comments that violate this policy will result in the commenter being banned from the site.