A Mexican immigrant living in the U.S. illegally hopes for deportation relief. by Fernanda Echavarri Tweet 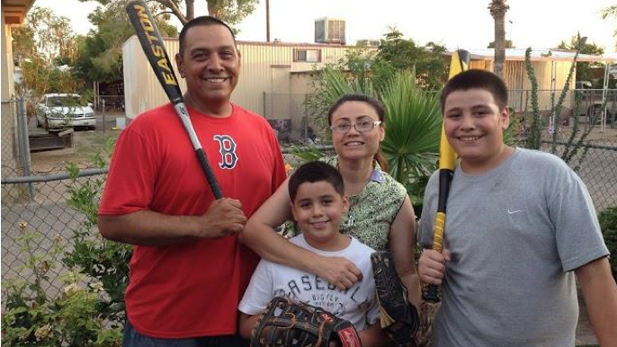 Rosa Robles Loreto with her husband Gerardo, and their sons Gerardo Jr. and Jose Emiliano.
Courtesy of Southside Presbyterian

Southside Presbyterian Church is giving sanctuary to a Mexican woman facing deportation, the second case this year for the church that started the sanctuary movement in the 1980s.

Rosa Robles Loreto will move into the church on Tucson’s south side Thursday evening and remain there until her deportation order is removed.

“The U.S. government said I had to voluntary deport by (Friday), but I’m not going to be one more of those deported, and one more family that is separated,” she said in Spanish.

Robles Loreto, 41, said she understands the risk of going public with her case but “it’s worth the risk if I get to fight to stay,” in a country she has called home for 15 years, she said.

“I have faith things will go well,” Robles Loreto said.

In a separate case, Daniel Neyoy Ruiz was given sanctuary at the church in May and after spending a month there, Immigration and Customs Enforcement granted him a one-year stay in the country.

Neyoy Ruiz moved into Southside Presbyterian with his wife and teenage son. Robles Loreto will move in alone.

“My husband and sons will continue to go to school and play sports,” she said. “They understand and they’re going to come visit me.”

Robles Loreto’s attorney, Margo Cowan, said her case is low priority and “should have received prosecutorial discretion long ago.”

In 2010, a traffic stop revealed Robles Loreto was in the U.S. illegally and she spent almost two months in an immigration detention center, Cowan said.

Once released, Robles Loreto went back home and last month she received a voluntary deportation order.

“Rosa is a woman of exceptional moral character,” Cowan said. “We trust that ICE will see fit to ensure that this mother is not torn away from her husband and children and will move to administratively close her deportation.”

Immigration and Customs Enforcement officials said in an email that the agency is reviewing Robles Loreto’s case.

Immigrant in Sanctuary One Year; When Will It End? Clergy: Let Woman in Sanctuary Stay in US Man Claiming Sanctuary Gets One-Year Deportation Reprieve
By posting comments, you agree to our
AZPM encourages comments, but comments that contain profanity, unrelated information, threats, libel, defamatory statements, obscenities, pornography or that violate the law are not allowed. Comments that promote commercial products or services are not allowed. Comments in violation of this policy will be removed. Continued posting of comments that violate this policy will result in the commenter being banned from the site.