Clergy: Let Woman in Sanctuary Stay in US 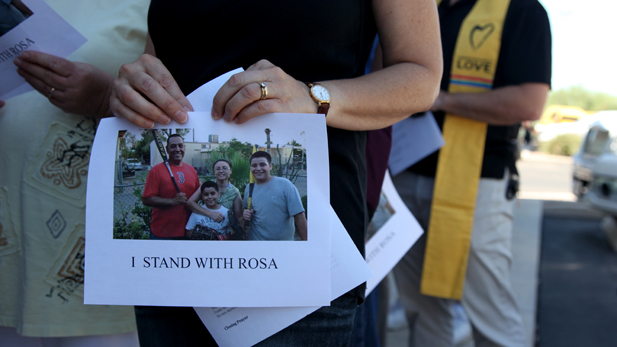 Rosa Robles Loreto has been living at the Southside Presbyterian Church since Aug. 7 and plans to stay there until her deportation order is removed.

The Mexican immigrant’s lawyer, Margo Cowan, said the group delivered the letter Thursday because that was the day Robles Loreto was required to check-in with ICE officers. 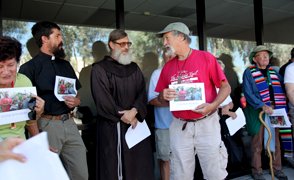 Religious leaders want ICE to remove deportation order for woman in sanctuary.
Fernanda Echavarri, AZPM
“We are here to check in for her,” Cowan said.

The letter listed supporters in Southern Arizona, including Rep. Raul Grijalva and Tucson Mayor Jonathan Rothschild, who have written letters to the Department of Homeland Security asking for Robles Loreto’s case to be closed.

That does not mean that if the 41-year-old mother of two is pulled over for a traffic violation that immigration officials would not be called to detain her, Cowan said.

This is the second case this year for the church that started the sanctuary movement in the 1980s.

In May, a Mexican man was granted one-year stay in the U.S. after living in sanctuary at Southside Presbyterian for four weeks.

Last week a Guatemalan man went into sanctuary at a Tempe church.

Supporters of Mexican Immigrant in Sanctuary Start Campaign Civil Rights Leader Visits Tucson Immigrant in Sanctuary Second Sanctuary Case at Tucson’s Church, Woman Moves in Today
By posting comments, you agree to our
AZPM encourages comments, but comments that contain profanity, unrelated information, threats, libel, defamatory statements, obscenities, pornography or that violate the law are not allowed. Comments that promote commercial products or services are not allowed. Comments in violation of this policy will be removed. Continued posting of comments that violate this policy will result in the commenter being banned from the site.