Phoenix-area HOAs are trying to save water on the green fields that the desert residents adore. by Bret Jaspers, KJZZ TWEET SHARE 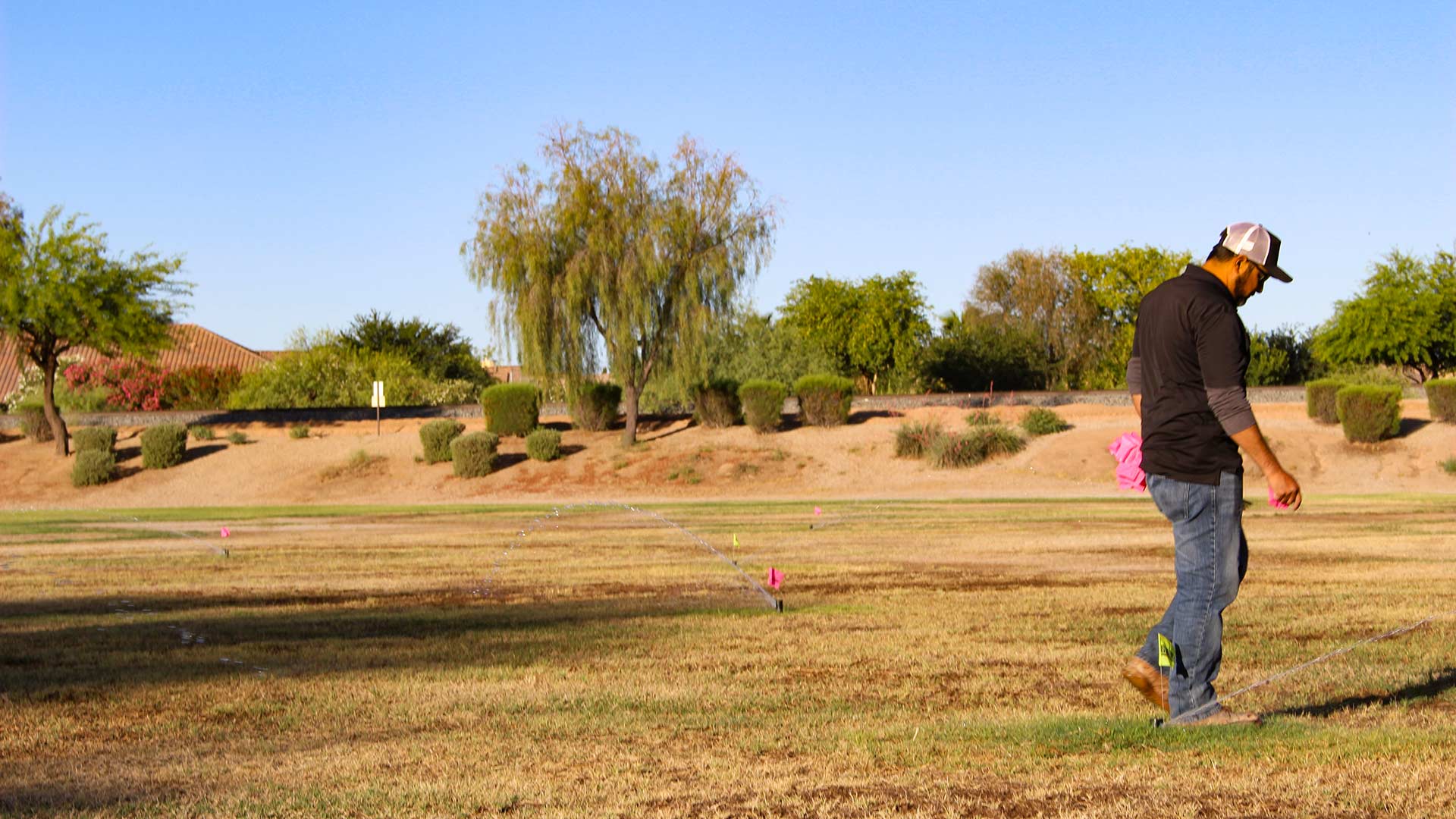 Jose Alvarez marks the sprinkler heads he has to change in order to test a new irrigation regime.
Bret Jaspers, KJZZ

This story is Part IV of a five-part radio series on water conservation in collaboration with KUER, KUNC, KJZZ and the Mountain West News Bureau.

Jose Alvarez, a supervisor at R. H. Dupper Landscaping, stood up from changing a sprinkler nozzle on a large grassy field at a homeowner’s association (HOA) in Chandler, Arizona. He surveyed the turf, a patchwork of green and brown.

“It looks terrible,” he said. “The sprinklers, they don’t have enough pressure, and they spray, like, a little bit.” He noted the rings, like miniature crop circles, created by uneven watering.

Josh Dupper said they get a lot of business fixing this kind of problem.

“Their water bills were through the roof because they were essentially flood irrigating,” Dupper said. “It still looked bad, even while they were spending a ton on water. And their landscaper just did not know what to do.”

Revamping the irrigation plan is the first step. Dupper’s company uses historical evapotranspiration data and homemade software to determine how much a field gets watered. He has crews come to each site monthly to take readings and adjust settings based on the forecast.

It’s a Goldilocks approach to landscape watering: not too much, not too little, but just right. 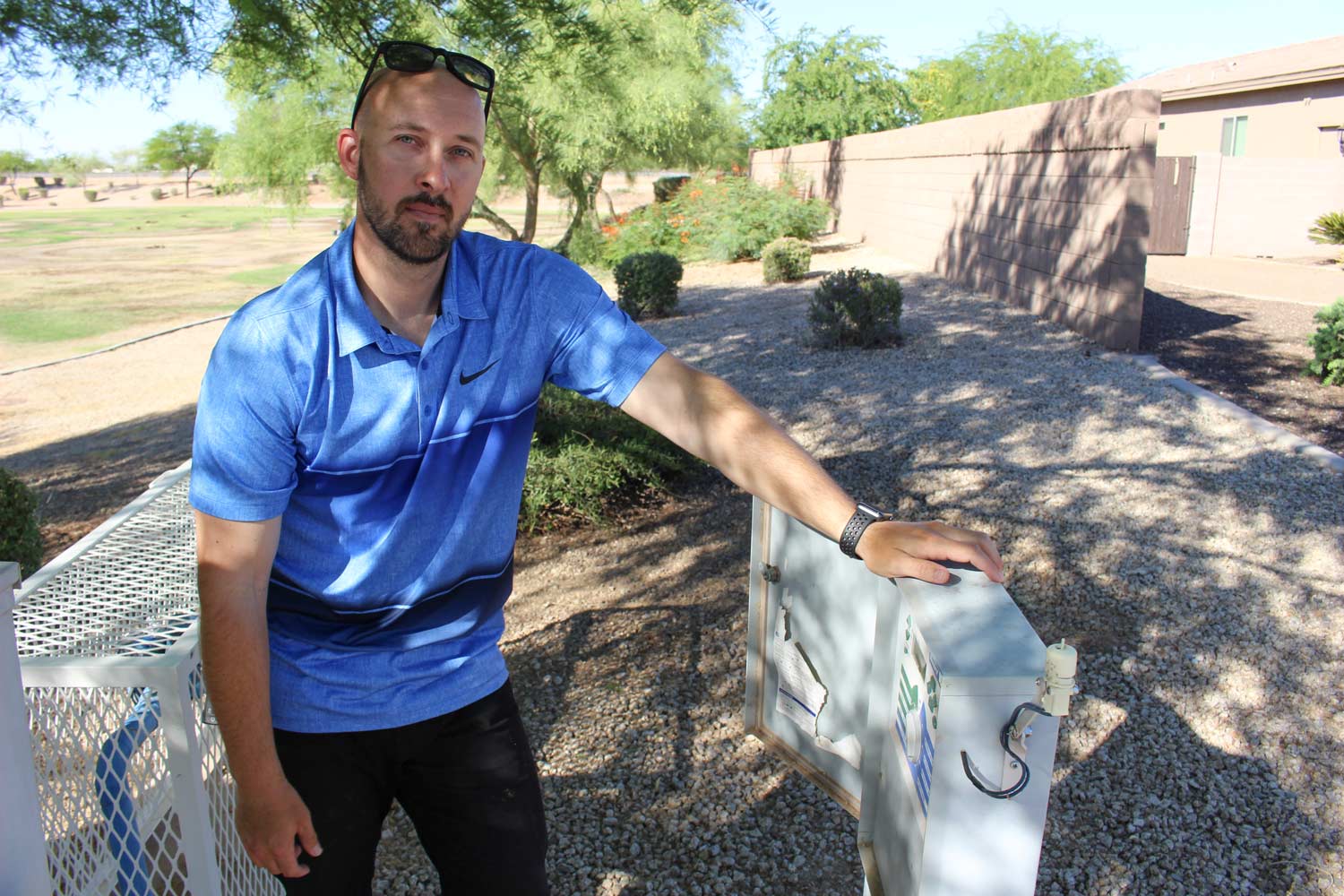 Josh Dupper of R.H. Dupper Landscaping in the Phoenix area says his industry lags behind in the technical knowledge needed to finely-tune water use to weather conditions.
Bret Jaspers, KJZZ

Lawns and landscaping are polarizing symbols when we talk about water use in the desert. Some communities are paying homeowners to rip out their grass. Others, like this Chandler HOA, are trying to save water on the green fields that residents adore.

In nearby Gilbert, Arizona, Jeff Lee is trying to nudge HOAs to look at watering that way.

Lee, a water conservation specialist for the town, traces an HOA’s landscape area using Google Earth Pro, converts that to square footage, then uploads the HOA’s monthly water usage to a vendor. The vendor, Waterfluence, analyzes the data using that month’s actual weather — not the historical weather conditions Dupper uses. HOAs and landscapers can see the results on a web portal.

Lee doesn’t want HOAs to underwater their large fields, trees and shrubs. The point is to let them know if they’re hitting that Goldilocks volume of water that maintains lush grass with low levels of water waste.

The Gilbert program is free for HOAs and voluntary. Lee said about 30 percent of the town’s 205 HOAs are enrolled. He estimated Gilbert saves over 200 million gallons of water a year through the program.

If you’re using too much water, though, getting on track can be expensive. 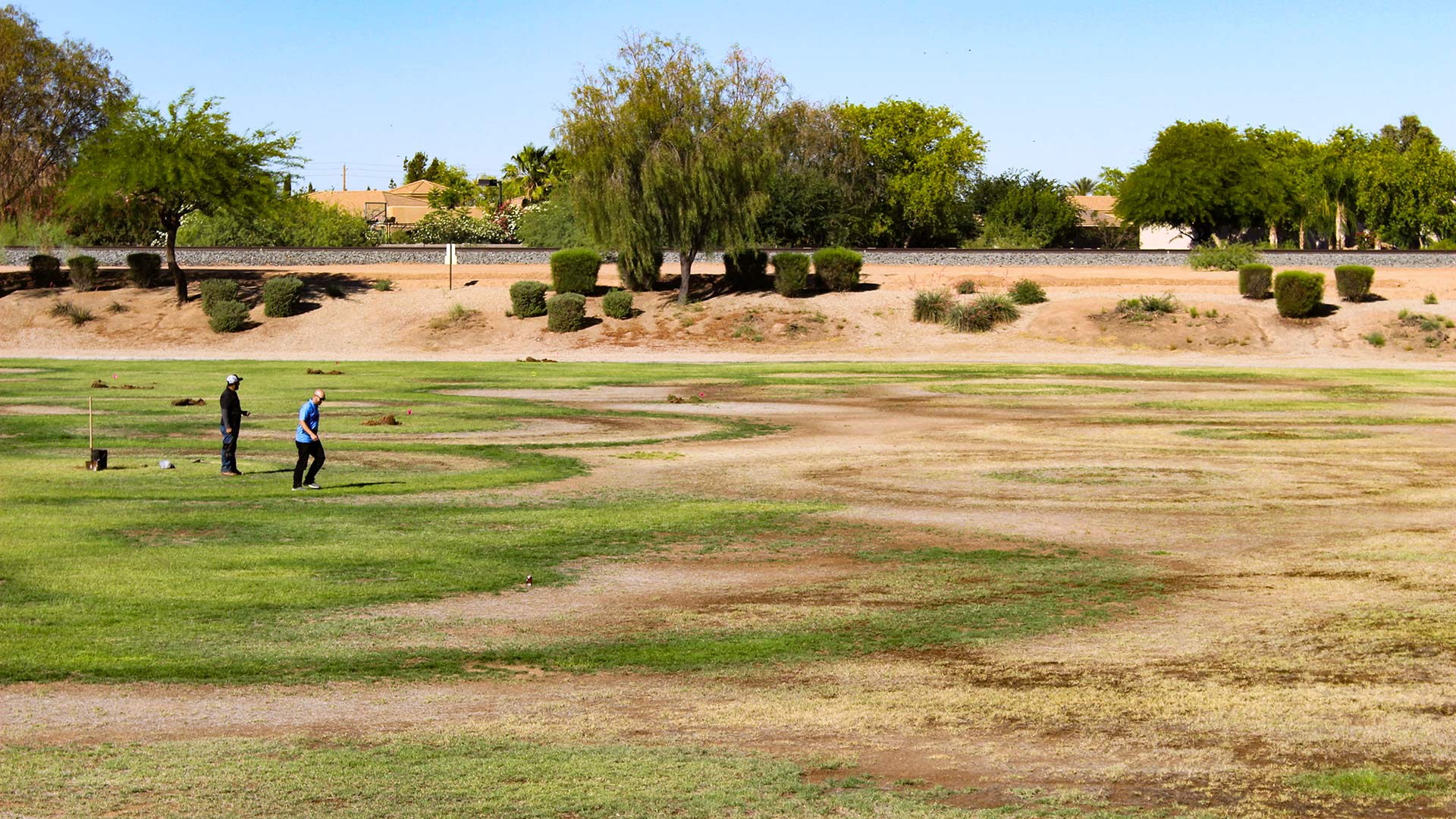 Kayte Comes is a board member of her HOA in Peoria, northwest of Phoenix. When her community, the Village at Vistancia, chose a new landscaper, they hired a firm that prioritizes conservation. Upon that firm’s recommendation, the board decided to replace parts of their irrigation system.

“Not every HOA, unfortunately, has the funds to do that,” she said. “But it’s gonna save your HOA in the long run.”

She added that a lot of businesses are willing to work with customers to help them afford upfront costs.

Some HOAs and landscapers are turning to so-called “smart controllers,” devices that adjust watering levels automatically. But Lee, Dupper and others say the smart controller is only as smart as the landscaper who programs it. Landscapers in Arizona can get a license if they pass two exams and have four years of experience.

“Part of the problem with the industry is it’s not advancing as fast as it should in the technical aspect,” Dupper said. “Because there’s no accountability or requirement to have it.”

The state of Arizona puts a water limit on HOAs in so-called “active management areas” in the middle of the state. Even then, it only applies to those with 10 acres of landscaping or more. But with an increasing awareness of tech tools and water scarcity, more HOAs may be looking for that Goldilocks volume.

This story is part of a collaborative series from the Colorado River Reporting Project at KUNC, supported by a Walton Family Foundation grant, the Mountain West News Bureau, and Elemental: Covering Sustainability, a new multimedia collaboration between public radio and TV stations in the West, supported by a grant from the Corporation for Public Broadcasting.

In the Desert City of Tucson, the Grass is Not Greener The Modern Toilet: A Contender for Water Conservation MVP Water Conservation Ethic Grows in Utah While Some Eye Pipeline Project
By posting comments, you agree to our
AZPM encourages comments, but comments that contain profanity, unrelated information, threats, libel, defamatory statements, obscenities, pornography or that violate the law are not allowed. Comments that promote commercial products or services are not allowed. Comments in violation of this policy will be removed. Continued posting of comments that violate this policy will result in the commenter being banned from the site.