In the Desert City of Tucson, the Grass is Not Greener

A few factors helped turn this former city of lawns into a leader in desert-adapted landscaping practices. by Vanessa Barchfield TWEET SHARE 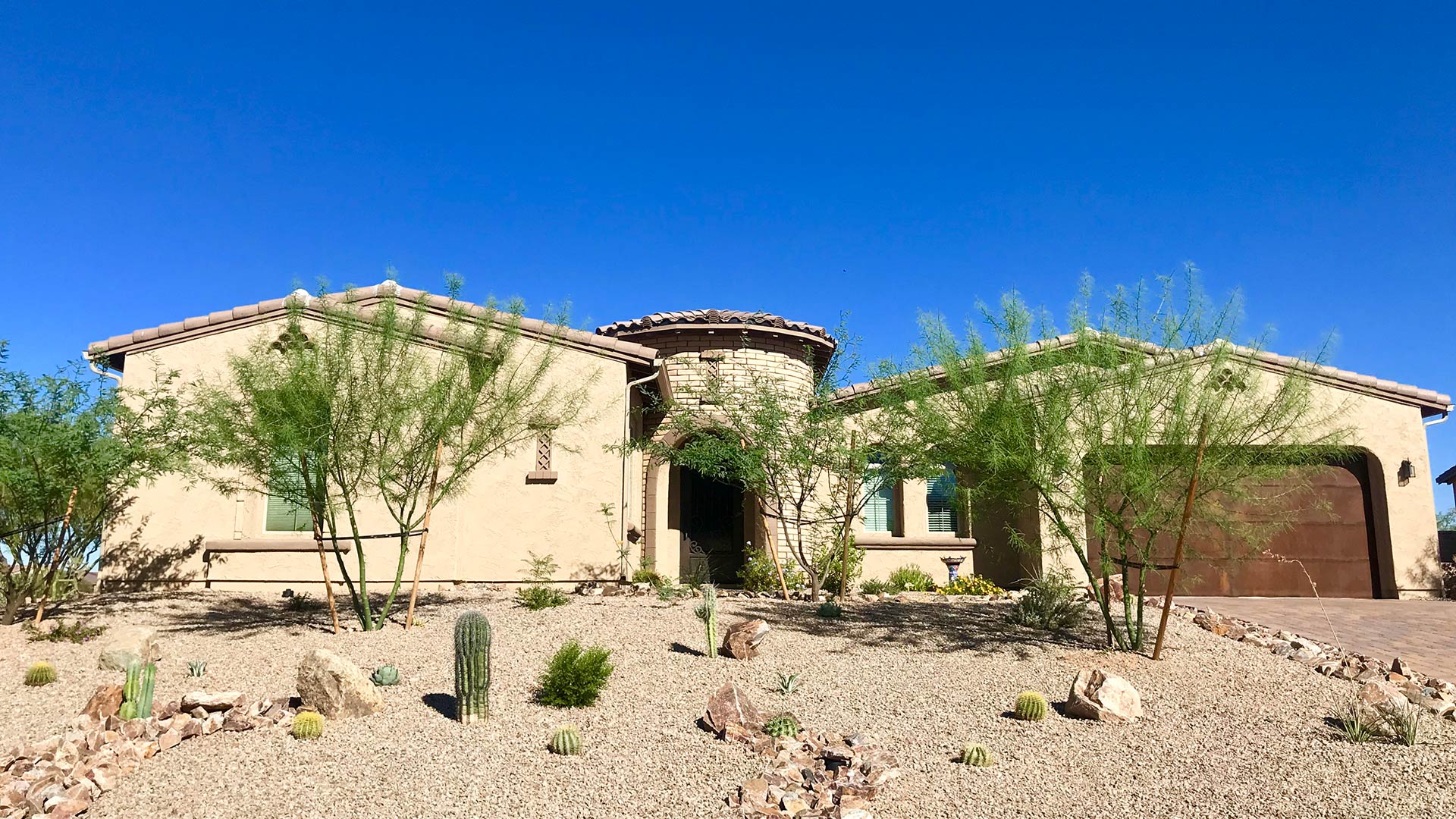 Since the 1980s Tucsonans have replaced their green lawns with decomposed granite and opted for plants like palo verde trees and cacti, which can endure long periods of drought and extreme heat.
Vanessa Barchfield, AZPM

This story is Part III of a five-part radio series on water conservation in collaboration with KUER, KUNC, KJZZ and the Mountain West News Bureau.

Tucson, Arizona used to be a city of lawns. Patches of Bermuda grass lined residential neighborhoods, kept green — even in blazing summer months — with diligent watering. Over the decades, that has changed. Tucsonans eschew lush lawns for landscaping that is more in tune with the city's desert setting, though that doesn't necessarily mean there's no green.

On a recent Friday morning, Hector Mendoza and his crew from the Artificial Grass Superstore unfurled a patch of synthetic lawn on the driveway of a house in Oro Valley, a suburb of Tucson.

It was a little before 8 a.m., but they'd been at it for a few hours already.

"We like to start as early as possible," said Mendoza. "Today's going to be 109 [degrees] so we try to beat the heat as best we can."

Over the next eight hours, Mendoza's team would transform the backyard of this house from a dirt lot into an artificial green oasis.

Business these days is good, Mendoza said. Most of his customers come to him for one reason.

"Just the cost of the water and [lawn] maintenance," he explained. "We don't foresee any cost on water going down."

Whether or not they go the artificial route, Tucsonans have been ripping out their grass for the past four decades.

"It starts in the '40s and '50s, when we had a growth in Tucson, but not a lot of investment was made in infrastructure," said Tucson Water spokesman Fernando Molina.

During the '70s, people who moved here from other parts of the country started feeling water stress for the first time.

"People were coming home at 4 o'clock, 5 o'clock, turning on their irrigation systems, probably doing their laundry as well," said Molina. "Putting a big burden on the distribution system. And we simply couldn't pump the water fast enough and deliver it to areas and meet these high demands."

Whether or not they go the artificial lawn route, Tucsonans have been ripping out their grass for the past four decades

Tucson Water responded by launching a public information campaign called "Beat the Peak," complete with television ads and jingles aimed at convincing residents to water their lawns less and at different points in the day.

"The original slogan was 'Never Water Between Four and Eight,'" said Molina.

The Tucson City Council also entered the fray in the late '70s, adopting a new rate structure for water use: As people used more water, the unit cost would go up.

That move proved so unpopular all the city council members who voted for it were recalled. But the rate structure remained and is still the law of the land today. According to Molina, the rate structure was instrumental in nudging Tucsonans to change their landscaping.

"The desert landscaping ethic has really taken hold here," he said. "We are 10 years ahead of most communities in Arizona in terms of even thinking about that, and 20 years ahead in terms of doing something about it." 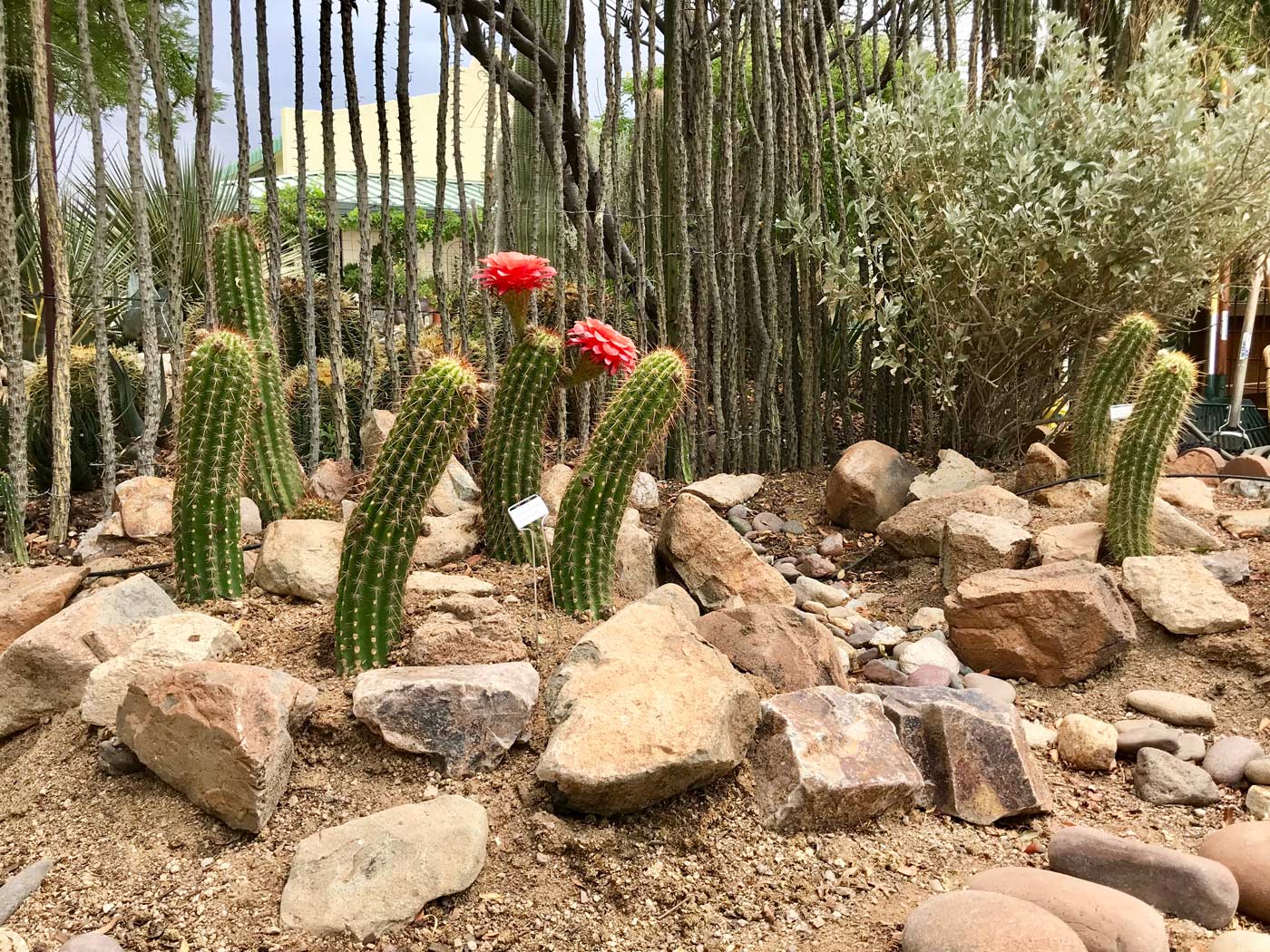 The Pima County Master Gardeners maintain demonstration gardens in Tucson to showcase a wide variety of desert plants and planting, irrigation and composting methods. The gardens are open to the public.
Vanessa Barchfield, AZPM

Pima County Master Gardeners is one of a number of organizations that promote low-water-use landscaping and xeriscaping, said the program's Eric Johnson.

"The seven principles of xeriscape are common-sense things like design, using desert-adapted plants, having an efficient watering system. Those kinds of things that are no-brainers to longtime Tucsonans and really help to have a beautiful garden and help save a great deal of water."

Johnson stressed that xeriscaping does not mean "zero-scaping," and the Pima County Master Gardeners exist to teach residents about the rich landscaping options in the desert.

Johnson said people come to the demonstration garden to get ideas for their own yards. 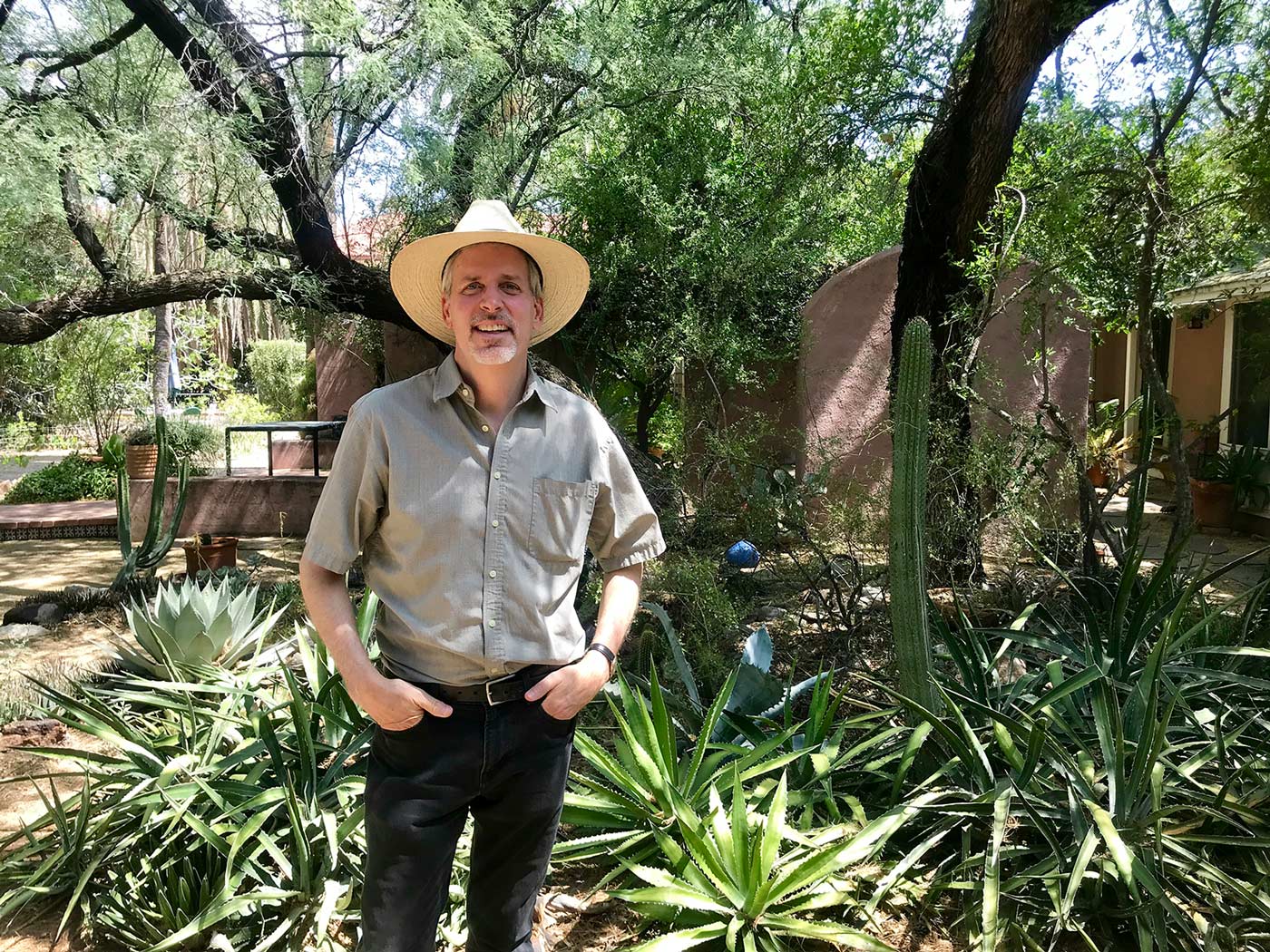 Even with no grass on the ground, landscape architect Steve Grede's home garden is an oasis of green in downtown Tucson.
Vanessa Barchfield, AZPM

"One is hesitant to be the only one on their street to take out a lawn and put in a rock and very different form of landscape," said Steve Grede, a Tucson-based landscape architect.

"But in Tucson, it really took hold, and it took hold in a major way," said Grede. “So much of landscape is based on fashion."

Grede is an expert on the fashion of desert landscaping, though he admits, "I did have a very small lawn area that I stopped planting over a year ago, and I've just let it go totally dormant."

His motivation for losing his lawn is closely linked to that water rate policy implemented in the '70s.

"I am eager to bring my water bill down," he said. But his reasoning went beyond his wallet.

What a Colorado River in Decline Means for the Radical Idea of Resurrecting Glen Canyon Arizonans to Decide on the State's Energy Future in November Arizona Has Been 'Banking' CAP Water But Doesn't Have a Clear Plan to Withdraw It
By posting comments, you agree to our
AZPM encourages comments, but comments that contain profanity, unrelated information, threats, libel, defamatory statements, obscenities, pornography or that violate the law are not allowed. Comments that promote commercial products or services are not allowed. Comments in violation of this policy will be removed. Continued posting of comments that violate this policy will result in the commenter being banned from the site.