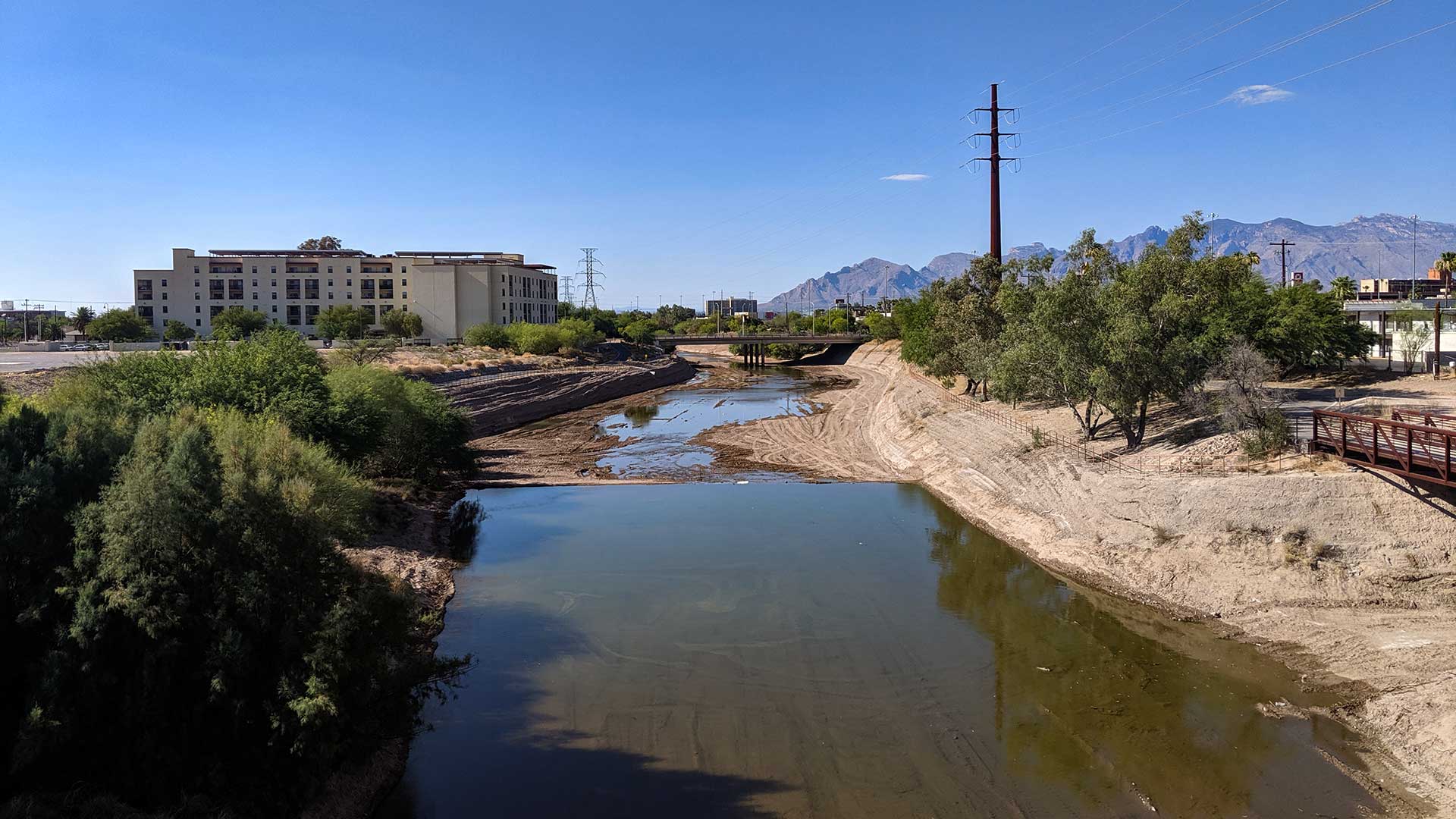 Water flows north of Cushing Street in the Santa Cruz River, midway through the first week of a project aiming to create a perennial flow in a section of the river, June 27, 2019.
Nick O'Gara/AZPM

A project to release water into the Santa Cruz River was expected to revive a 1.5-mile stretch of the waterway, but officials say water has traveled nearly twice as far in the effort's early stages.

For the last week, the project has been pumping millions of gallons of reclaimed water into a section of the Santa Cruz River with various stated goals, including recharging the aquifer through the river channel, boosting riparian health, and complementing recreational, cultural and historical resources in the area.

Officials expected the Santa Cruz River Heritage Project would revive a strip of water reaching the area around Cushing Street Bridge, about 1.5 miles north of its starting point. By the end of last week, Tucson Water's Fernando Molina said the project had sent water downriver to at least Speedway Boulevard, about 1.3 miles beyond Cushing Street.

"It has flowed in these early stages much further than we initially anticipated. And we're pretty happy about that."

While Molina said the reason the flow has gone beyond projections isn't clear, there's a chance it resembles something they've observed at the city's Colorado River water recharge basins.

"It actually takes a while for the sediments to get wet and really increase the flow downward into the aquifer [through the recharge basins]," he said.

If that happens, the river could retreat, but that would also likely indicate progress toward the goal of sending water to the aquifer, Molina said. Like all of its other recharge efforts, Tucson Water will be monitoring the project for any changes.

The event last week was received by a crowd splashing in the water, just preceding the annual El Dia de San Juan celebration, which welcomes the return of monsoon. Molina said the community response has been overwhelmingly positive.

"No pun intended, but it's been a constant flow of people going to the river."

That also raises some health concerns. The reclaimed water is permitted the same way as the water irrigating parks and golf courses, he said: for "incidental contact." While some wading and splashing is probably fine, Molina is urging anyone drawn to the water to decide against getting all the way in.

"The second that water hits the river channel, then it becomes river water, and I think people need to be cognizant of the fact that once it's in the river channel it's exposed to everything that's exposed to the sands and the soils in there, such as waste from wild and domestic animals, urban stormwater runoff."

His agency is encouraging people to not swim in it, which would increase the risk of ingesting water. Further, he says, any river-goers should be aware of the dangers of flash flooding when the rains return.

Defense Department cuts funding for border wall section in Yuma Immigration advocates: Exposure to COVID-19 higher than reported in ICE detention UA hurricane forecasters map summer season
By posting comments, you agree to our
AZPM encourages comments, but comments that contain profanity, unrelated information, threats, libel, defamatory statements, obscenities, pornography or that violate the law are not allowed. Comments that promote commercial products or services are not allowed. Comments in violation of this policy will be removed. Continued posting of comments that violate this policy will result in the commenter being banned from the site.