The state is releasing guidance on youth activities and schools in the coming days. Tweet 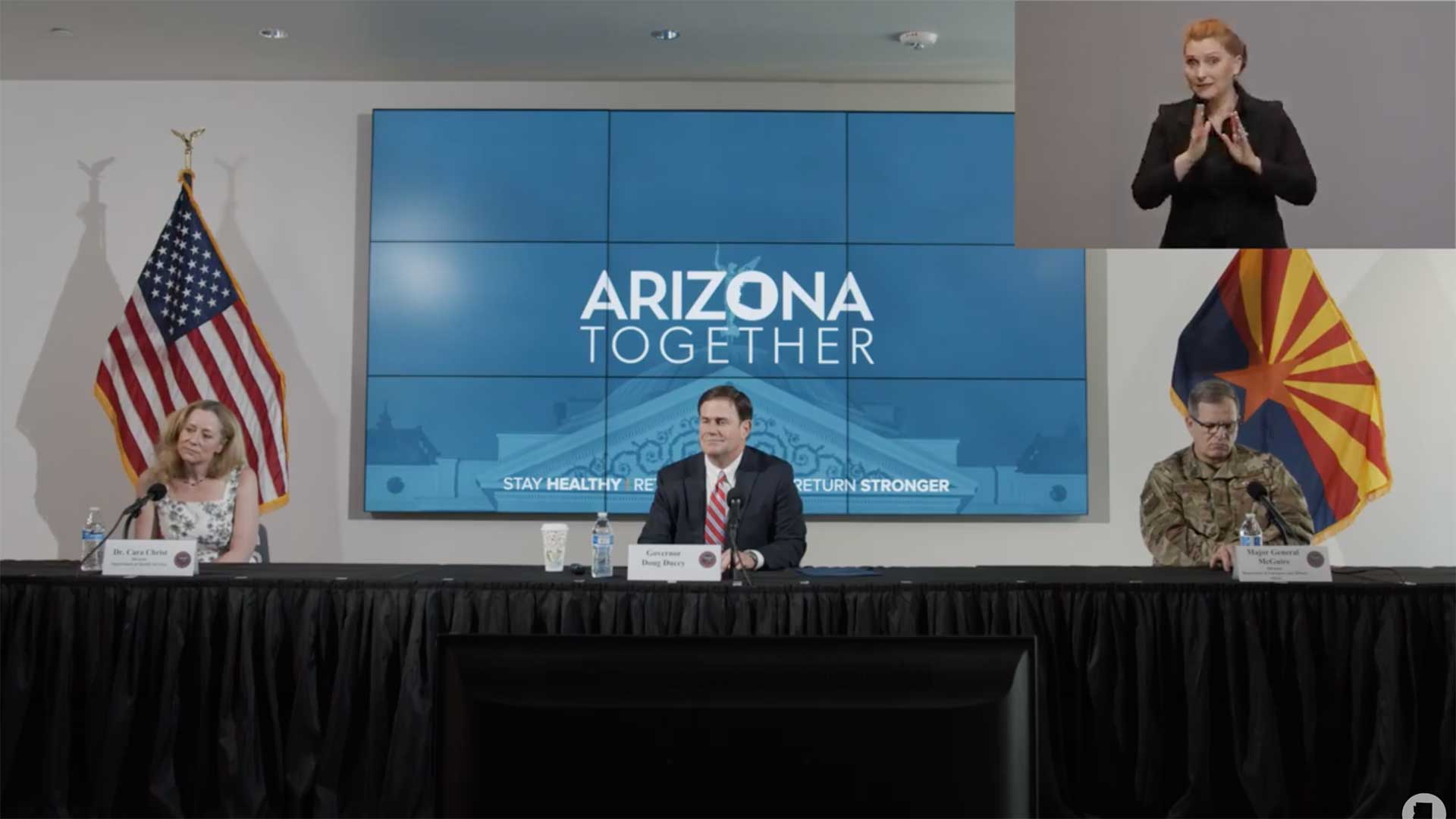 Arizona Health Director Cara Christ, Gov. Doug Ducey and Director of the Department of Emergency and Military Affairs Maj. Gen. Michael McGuire at a May 28 update on the state's response to the COVID-19 pandemic.
Office of the Arizona Governor/YouTube

School will be back in session come August, according to Gov. Doug Ducey.

In a Thursday press conference, Ducey said he has been meeting with school leaders and superintendents around the state to discuss what school will look like this fall. He said State Superintendent Kathy Hoffman will be releasing guidance June 1 for schools, and an accompanying executive order will support schools being flexible in resuming in-person instruction.

The governor said the state is possibly seeing the start of a downward trend in COVID-19 cases, but it's still too early to tell. He said the state is prepared for a spike in cases, as hospital beds, ICU beds and ventilators remain in good supply.

Ducey announced the reopening of schools even as the state sees an uptick in metrics used to track the progression of the disease, including the portion of tests that are positive and the portion of emergency room visits that are for COVID-19 symptoms.

The state's "testing blitz" will continue, focused on people who are symptomatic or have been exposed, Ducey said.

Arizona Health Director Cara Christ said the state is in the process of testing all residents and staff in Medicare certified skilled nursing facilities, and working on ramping up testing at all of the state's long term care facilities and conducting antibody testing for prison staff.

Before the briefing, Ducey pushed back on media questions about videos from old town Scottsdale on Memorial Day that showed hundreds of people partying in the nightclub district. He said the focus should instead be on the millions of Arizonans responding to calls for social distancing.

The governor said Arizona continues to be in phase 1 of reopening, which recommends limiting social gatherings to 10 people or less. "When we get to phase 2, that number expands to 50," Ducey said. "We're not in phase 2 yet, we're very close, we're headed in the right direction."

Associated Press contributed to this report.

COVID numbers rising in Arizona again Healing through culture Health insurance open enrollment sees lower premiums
By posting comments, you agree to our
AZPM encourages comments, but comments that contain profanity, unrelated information, threats, libel, defamatory statements, obscenities, pornography or that violate the law are not allowed. Comments that promote commercial products or services are not allowed. Comments in violation of this policy will be removed. Continued posting of comments that violate this policy will result in the commenter being banned from the site.