As the drought grinds on, Maricopa County homeowners take advantage of xeriscape incentives 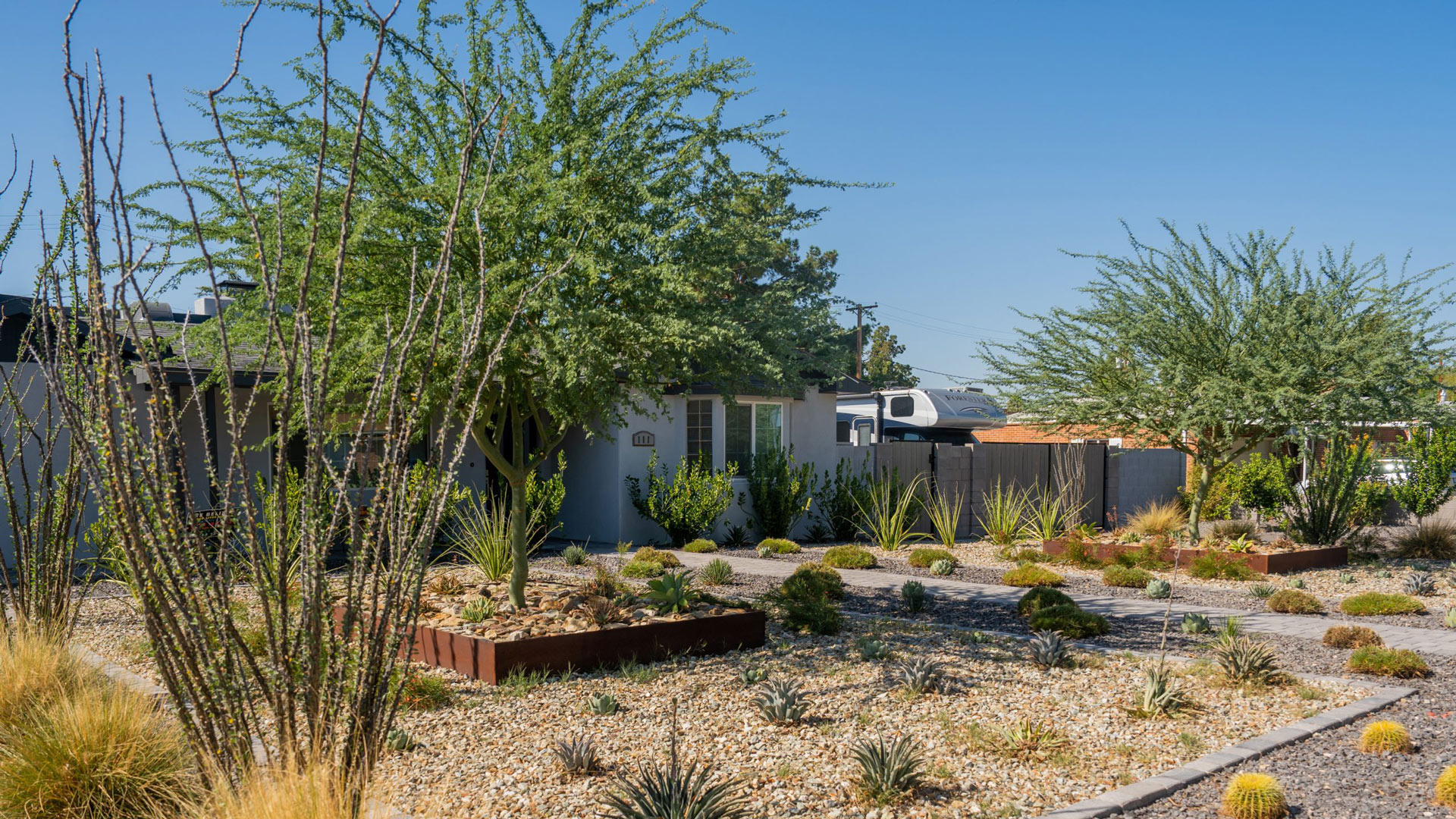 This yard in Mesa was converted to desert landscaping under the city’s Grass-to-Xeriscape incentive program. September 2022.
Samantha Chow, Cronkite News

Kelly Gleave converted his grass lawn to xeriscape in April. In June, he and his wife saw a 3,000-gallon reduction in their water use.

“For me, it was less about maintaining the grass and it was more about the fact that the Valley is getting a lot of people and we need to do more to conserve water,” said Gleave, who’s one of 450 Mesa homeowners who have taken advantage of the city’s grass-to-xeriscape incentive.

The U.S. Bureau of Reclamation announced in August that deliveries of Colorado River water – the majority of which is used for agriculture – to Arizona would be cut an additional 21% next year.

According to the bureau, megadrought and low runoff conditions accelerated by climate change have resulted in record low water levels in Lakes Powell and Mead, the two largest reservoirs in the country.

Because of the cuts to Arizona’s water and the state’s climate conditions, homeowners should consider sustainable ways to use water, according to Warren Tenney, the executive director of the Arizona Municipal Water Users Association, an organization of 10 Valley cities whose website says protects its members’ water supplies “by ensuring laws and regulations support water resources sustainability enabling continued prosperity in the desert.”

Tenney said watering lawns efficiently is an important way municipal customers can conserve. More than half of residential household water goes toward landscaping, he said, and in some cases, it’s as much as three-quarters.

Xeriscaping can help. The artistic approach to landscaping includes the use of drought-tolerant plants and efficient irrigation. Xeriscape has become a popular style of landscaping across the Valley for many years – even Phoenix Sky Harbor International Airport swapped its green lawns for xeriscape in 2019.

Mesa offers up to $500 for homeowners who replace grass with xeriscape to save water and money. Qualifying homeowners must remove at least 500 square feet of grass and replace it with succulents, cactuses, aloe, shrubs, and trees that thrive in the desert heat and can survive on rainfall or a low-use watering system.

The Mesa Grass-to-Xeriscape and Trees Are Cool programs – homeowners who plant low-water-use trees can qualify for an additional $50 or $75 – can help homeowners reduce their landscape water use by half or more.

Homeowners are making the change for two reasons.

“A lot of the people that do this program, in particular, tell me they want to do it because, number one, they want to save water, and number two, they want less maintenance,” said Becky Zusy, the conservation coordinator for Mesa.

Chandler also has a water conservation rebate and incentive program offering up to $200 for the installation of xeriscape at a newly constructed home or up to $3,000 for a grass lawn conversion.

Tenney said most landscape plants don’t need as much water as many homeowners think, and that when watering grass, “really let the ground soak and then don’t worry about watering quite so long.”

Tenney said the water shortage in the Colorado River Basin is serious and expected to get worse. More needs to be done to make a bigger reduction in Arizona’s water use, he said, and that will depend on agriculture.

According to the Arizona Department of Water Resources, irrigated agriculture is Arizona’s largest water consumer, using about 74% of the available water supply.

Biden signs water bills benefiting 3 tribes in Arizona California holdout in agreement over Colorado River cuts Vertical farm in Avondale promotes sustainability, technology, water conservation
By posting comments, you agree to our
AZPM encourages comments, but comments that contain profanity, unrelated information, threats, libel, defamatory statements, obscenities, pornography or that violate the law are not allowed. Comments that promote commercial products or services are not allowed. Comments in violation of this policy will be removed. Continued posting of comments that violate this policy will result in the commenter being banned from the site.