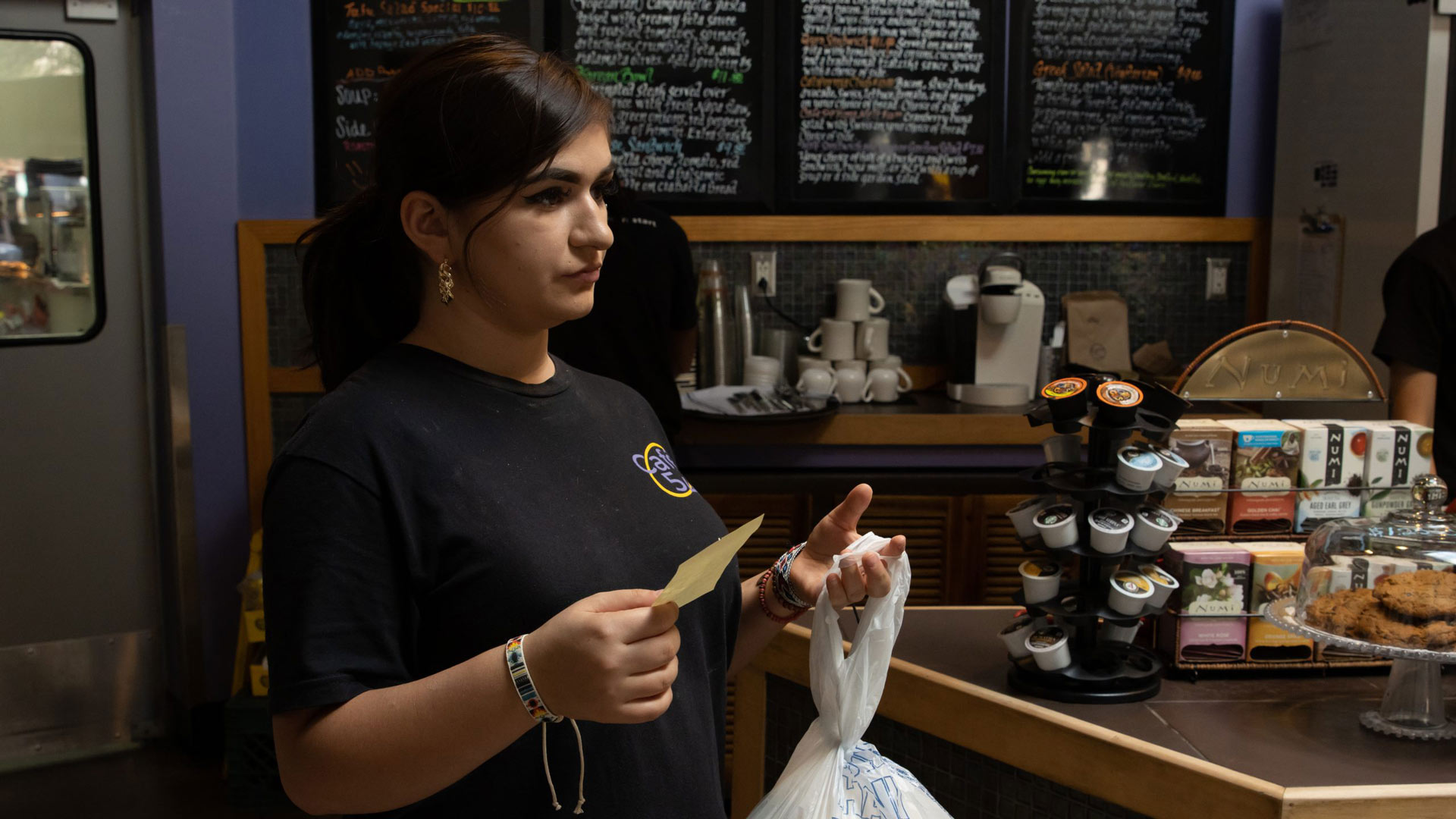 At first glance, Café 54 looks like any other eclectic and artsy lunch spot, with drawings, paintings and collages covering its red brick walls. But take a closer look, and the unique mission of the eatery becomes apparent.

Table numbers that customers receive after ordering include the story of a famous person with mental illness – the singer Adele, for example, who has been open about living with depression. And those who work in the restaurant wear T-shirts displaying its motto: “Fresh Food, Fresh Start.”

Located in downtown Tucson, Café 54 serves as an employment training program for people with mental health conditions or developmental disabilities. Trainees are paid to work as cashiers, cooks, dishwashers, and servers. The goal is to help them gain new skills and land a permanent job in the workforce – just as soon as they’re ready.

“We believe that recovery is possible for anybody, and oftentimes that’s best achieved … through community involvement and through employment,” said Jeff Grobe, executive director of Coyote TaskForce, a nonprofit advocating for adults with mental illnesses.

The organization opened Café 54 in 2004 to create a nonclinical setting to help people achieve their goals, whether that be employment, developing social skills, or making friends.

“We’re trying to break through the stigma of mental illness,” Grobe said. “Every single meal that we serve is an opportunity for somebody in the Tucson community, or outside of that, to recognize that mental illness is not the barrier that it used to be, and it doesn’t have to be a barrier at all.”

Mental illness affects 1 in 5 adults across the country, according to the National Alliance on Mental Illness. In Arizona, more than 1 million adults have some sort of mental health condition – but about one-third do not get needed health care, often because of cost. People of color are even less likely to get mental health care, NAMI reports.

Of the estimated 11 million adults living with serious mental illness in the U.S., as many as 90% are unemployed, studies show. Yet research indicates that most of those individuals want to work and consider finding employment a top priority.

Supported employment, which matches people with severe mental illness to appropriate jobs and offers ongoing support during employment, is an evidence-based practice that can help patients succeed, according to the federal Substance Abuse and Mental Health Services Administration.

At Café 54, trainees usually are referred by psychologists, psychiatrists, case managers, and other behavioral health providers. Employment at the cafe can last anywhere from a few weeks to several months and can be extended depending on the trainee’s individual needs.

Mercedes Diaz, 22, who has been a trainee for nearly three months, has mental health challenges and is on the autism spectrum, but she said she’s never let that keep her down.

“I’ve always wanted a job. I’m a fast learner, and I like to pick up things,” she said. “They love me here because I like to learn new things.”

Diaz has worked both front and back of the house, checking food, manning the cash register, and delivering plates to tables. But her time at Café 54 ends this month. She’s looking into positions at Harkins Theaters and Fry’s, and has aspirations to someday work for Amazon and maybe become a school teacher.

“I’ve never had a job before this,” she said. “The people here have been really supportive, and it feels like a family. I’ll be sad to leave.”

During their time at Café 54, trainees work with a job developer who helps them create resumes and cover letters and apply for positions. These coaches, Diaz said, “guide us to work on our next chapter in our life.”

Success stories like Diaz’s are what Laurie Taylor, program manager at Café 54, strives for.

Diagnosed with schizophrenia in her 20s, Taylor remained stable on medication for 10 years before a new doctor said she was misdiagnosed and took her off the drugs. Within a year, Taylor said, she lost her job, became homeless, and ended up in jail.

After undergoing court-ordered treatment, she stabilized and pursued her certification as a peer support specialist. She was hired at Café 54 in 2014 and provides day-to-day support and facilitates monthly recovery team meetings with trainees to assess their progress.

“There’s more to it than just employment,” she said. “We’re helping people find housing. We’re helping them get stabilized on medications. We’re teaching them coping skills and encouraging them to attend therapy and creating this community of support.”

The program has had many success stories. Grobe specifically remembers a trainee who’d suffered a traumatic brain injury but changed his life after Café 54.

“He learned both the front of house and the back of house skills,” Grobe said. “He just needed a chance, he needed an opportunity … and now he’s working in finance. He comes back and he volunteers all the time for us. …

“Those success stories are why we do this. Somebody gets that job, and you can see their face light up. They get their first paycheck, and they call us about it. … It’s just an amazing feeling, because that person’s life has significantly improved in that moment.”

Building the future: Trade occupations encouraged as demand for skilled labor grows High school students build a road-worthy electric vehicle Three years on, COVID-19 no longer grabs headlines, still poses a threat
By posting comments, you agree to our
AZPM encourages comments, but comments that contain profanity, unrelated information, threats, libel, defamatory statements, obscenities, pornography or that violate the law are not allowed. Comments that promote commercial products or services are not allowed. Comments in violation of this policy will be removed. Continued posting of comments that violate this policy will result in the commenter being banned from the site.