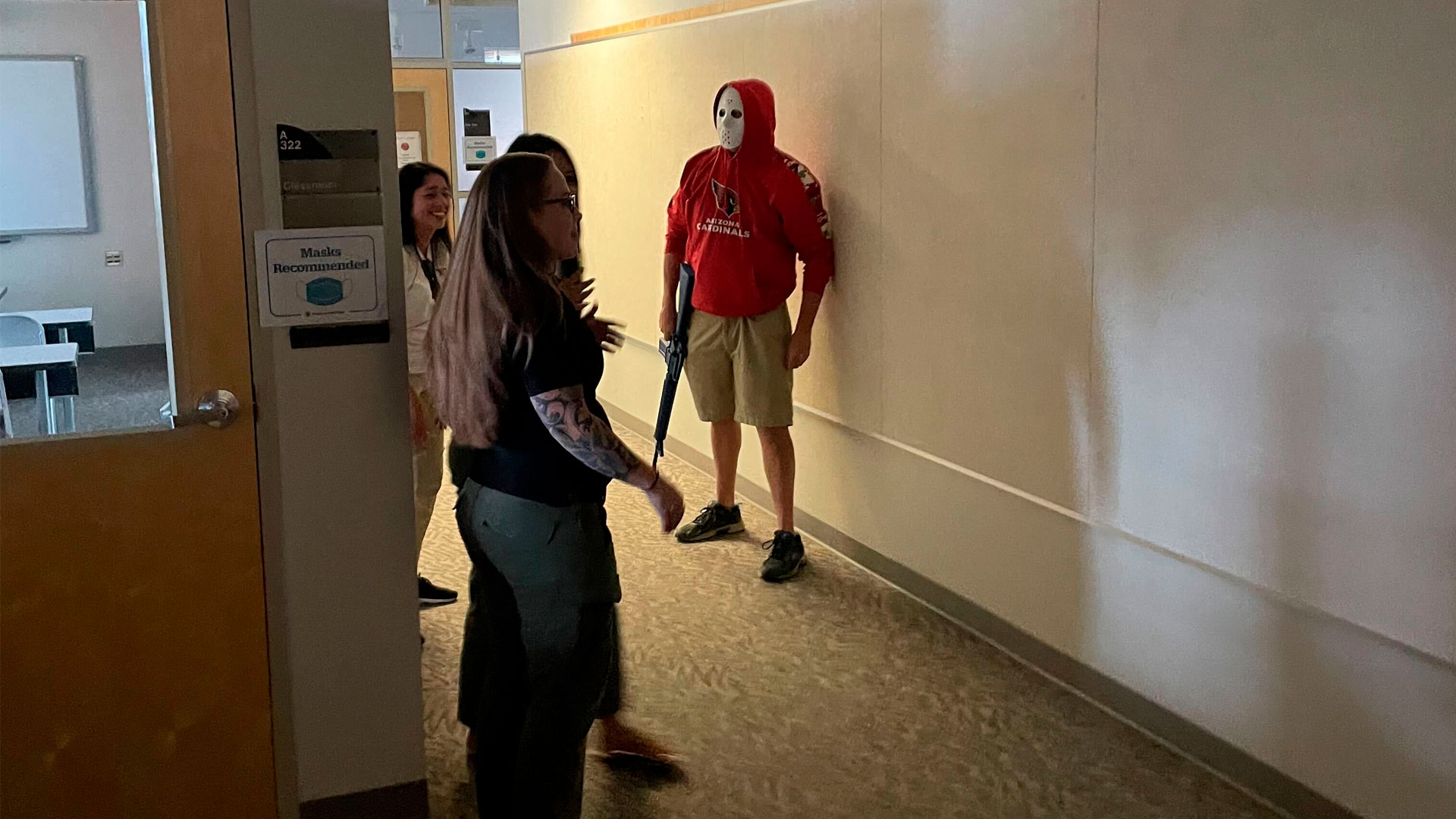 School shootings during the summer break, especially the one at Robb Elementary School in Uvalde Texas where 19 children and two teachers were murdered have sharply focused attention here in Southern Arizona on training and preparation should such an attack happen here.

While the debate about gun regulation continues to remain at the heart of a bitter political argument nationwide, schools are trying to find effective local tools to prepare for any potential danger.

Pima County School Superintendent Dustin Williams says it is unfortunate that such training is necessary, but that school security has entered a stressful new era and there's no going back.

"So the days of teaching the fire drill, single-file line, walking outside, finding your class spot. has now changed to teaching the students what to do when there is a predator on campus," he says. "So now what we're seeing is heightened responsibility, new dedication towards safety and a new trend which unfortunately is deadly, and really, really hard to talk about, and most importantly, hard to teach on a campus."

As part of the preparation, the Pima county Sheriff's Department has been holding daylong trainings during the summer

The trainings are far from academic. While there is a classroom element to teach basic fundamentals, such as run, hide, fight, the real power of these trainings is in their hands-on approach. 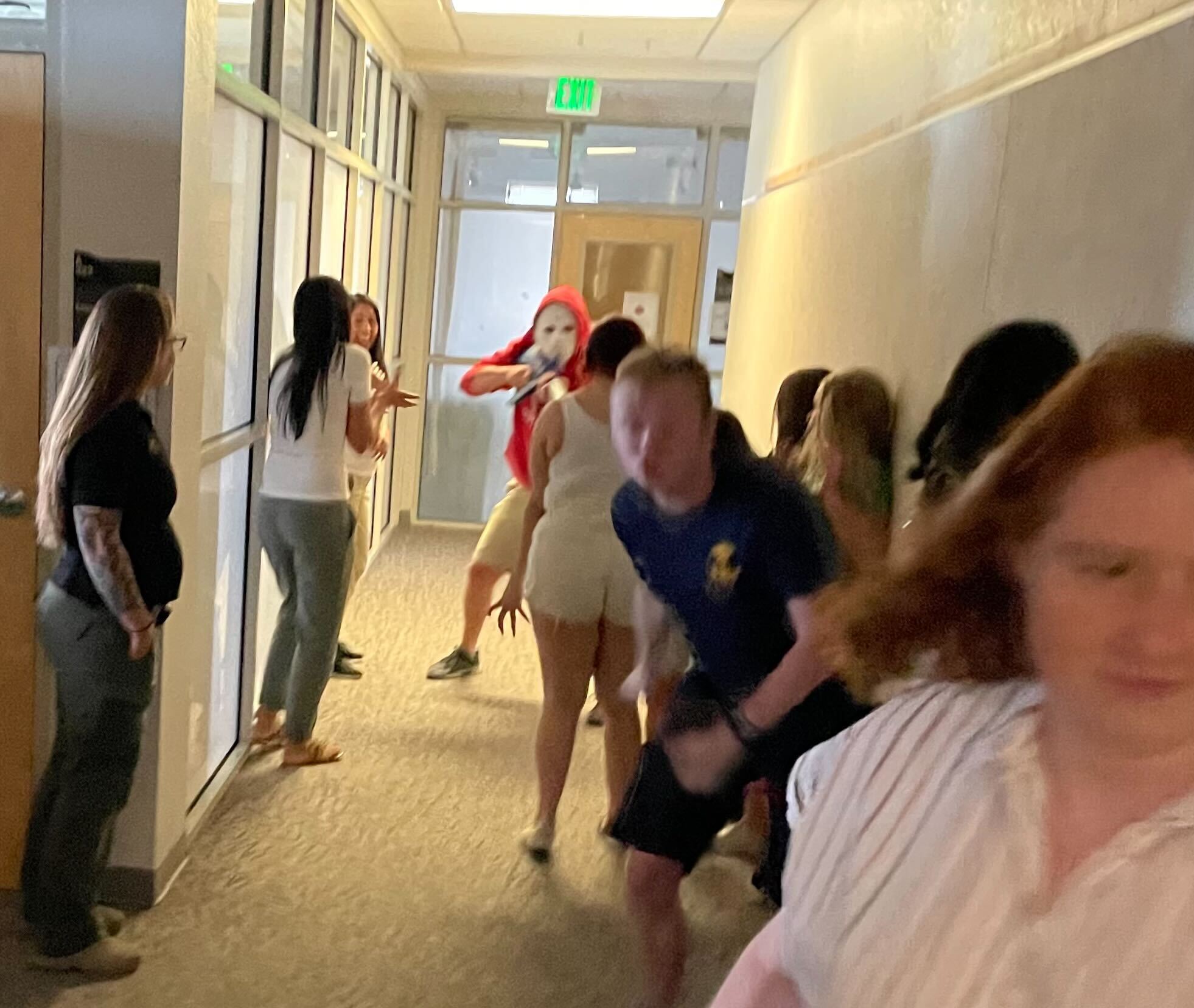 Much of the training is focused on techniques to stay sharp mentally and intentionally present under sudden fear and stress, to maintain the clear thinking needed to respond intelligently and protect themselves and their students.

Pima County Deputy John Slattery says when faced with sudden trauma - the body produces adrenaline - that forces blood and oxygen to the extremities to prepare them for action…and temporarily away from the brain causing a slowing of cognitive function - the ability to think clearly. 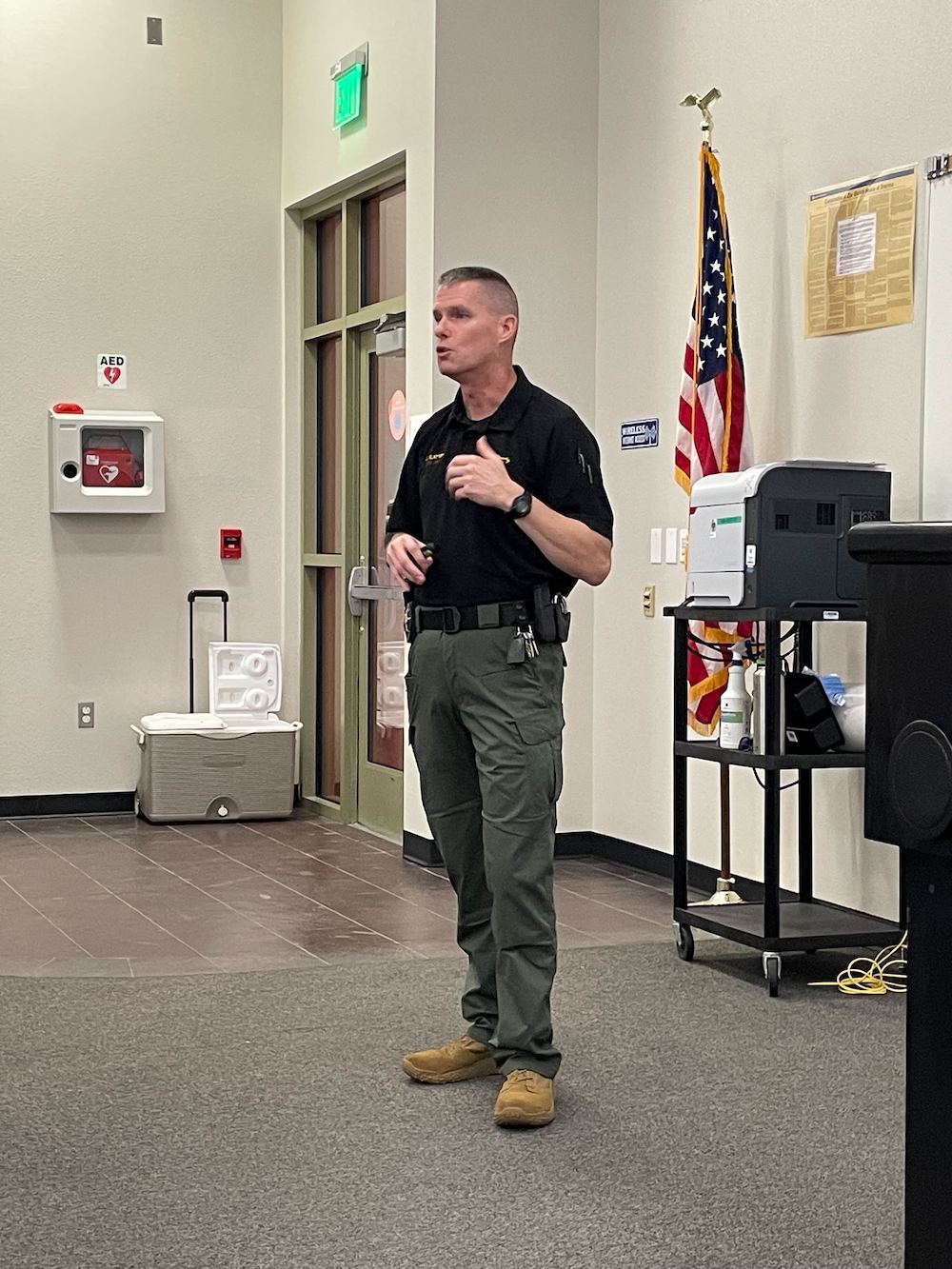 But it's not just deep breathing. Slattery trains them how to use military breathing techniques - adding intentional observation to re-engage the brain. He teaches what is called military breathing. It is based on taking deep breaths as a way of getting more oxygen into the bloodstream. Nothing really new there, but when combined with intentional focus on one's surroundings, what he calls "putting your head on a swivel and increasing situational awareness," breathing while looking to analyze what is going on around them - to see who's around, what should be considered a threat? Should they run, or hide, or try to confront and remove the threat?"

The training also teaches the most effective techniques for pulling injured people to safety - grabbing them under their arms from behind and pulling them from the danger zone - reducing the friction with just their heels dragging on the ground behind them.

Slattery lies on the ground, while a trainer from ICSave, a non-profit group that does emergency triage training shows the group how it's done.

"He's like a sack of potatoes," he says. "I need some sort of handles to pick him up. I'm going to use his forearms like tea handles. I'm going to keep him right underneath me. I'm going to keep my back straight and lift with my legs, not my old worn out back. Now, I don't have much surface area contact and I can drag him a long way."

Again, each trainee gets several chances to try the technique and get comfortable with it.

In real active shooter incidents, responders do not stop to pull anyone to safety or provide first aid. Their immediate and only focus is to find and take out the shooter before he can do any more damage. But a little training for teachers and school staff could allow them to save someone's life, especially someone who may be in danger of bleeding out, often with only minutes to act.

Bruce Whitney with ICSaves tells the group: "The number one cause of death after injury is bleeding and that is something you can do something about." 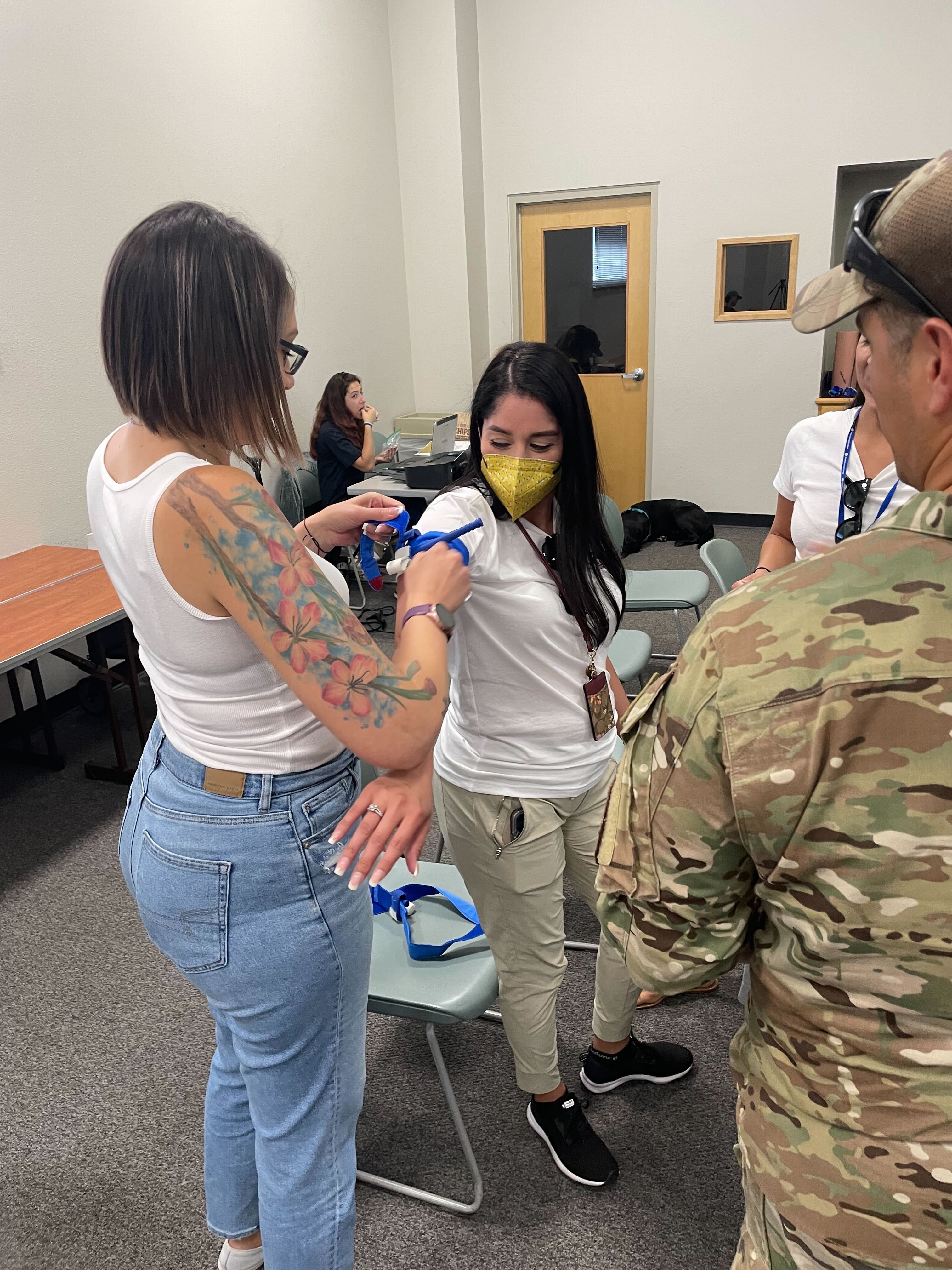 ICSave volunteers show the teachers and school staff how to stop traumatic blood loss before it's too late. They demostrate how and where to apply professional tourniquets to stem blood loss while waiting for EMT's to arrive. 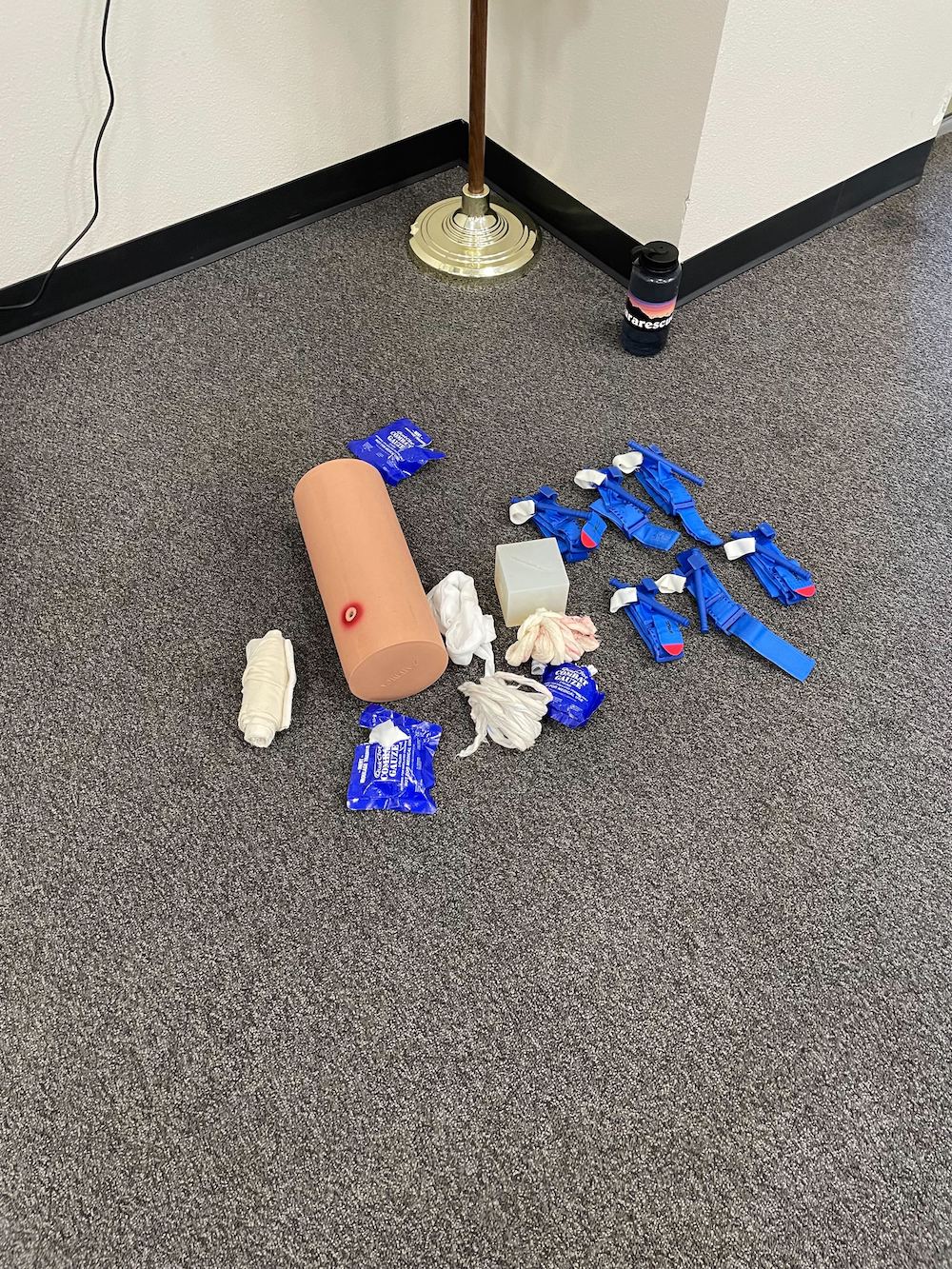 But all the training cannot ensure how someone will respond under pressure…so the training concludes with 4 realistic live action scenarios - designed to put teachers and staff in situations as close to real as possible and give them the opportunity to try to put what they had just learned into action under stress.

Each small group of about 4-5 people work their way through the four scenarios.

The first scenario is in a classroom. Two students begin to argue loudly. All attention turns to them. But on the other side of the room, a student stands up and puts a fake pistol to her own head. The teachers freeze and the scenario comes to an end.

Before moving on to the next scenario, there is a discussion of why they froze, and what options they might have considered. There is no finger pointing, just an opportunity to mentally and emotionally unpack what they had just been through and critique it clinically

As they work their way through the scenarios, the teachers begin to become more alert, more present and intentional in how they approach the situation. They reacted more quickly, putting their training into practice, taking stock of the situation, rand making the best decisions they could on the fly

For example, in another scenario, held in an outdoor lunch area, a man with a fake gun appears, 40-50 yards away.

He screams: "Billy, where's Billy?" before firing off several blank rounds. The sound of the shots ignite the teachers to action. They yell for the children to run, herding them quickly into an adjacent building, and locking and barricading themselves in a classroom.

Afterwards, one teacher said it had been scary and extremely stressful, but that she felt she was significantly better prepared mentally and emotionally than before the training…and that the lifelike scenarios had given her a feel for what it would be like to face a real active shooter situation and how she would respond to it.

As it recruits, Tucson Police look to diversify its force The Buzz: Law enforcement recruiting and shortages in Southern Arizona Protests begin after abortion ban is reinstated
By posting comments, you agree to our
AZPM encourages comments, but comments that contain profanity, unrelated information, threats, libel, defamatory statements, obscenities, pornography or that violate the law are not allowed. Comments that promote commercial products or services are not allowed. Comments in violation of this policy will be removed. Continued posting of comments that violate this policy will result in the commenter being banned from the site.