A 105-mile-long city will snake through the Saudi desert. Is that a good idea?

It will cost hundreds of billions of dollars to build. by NPR/Bill Chappell Tweet 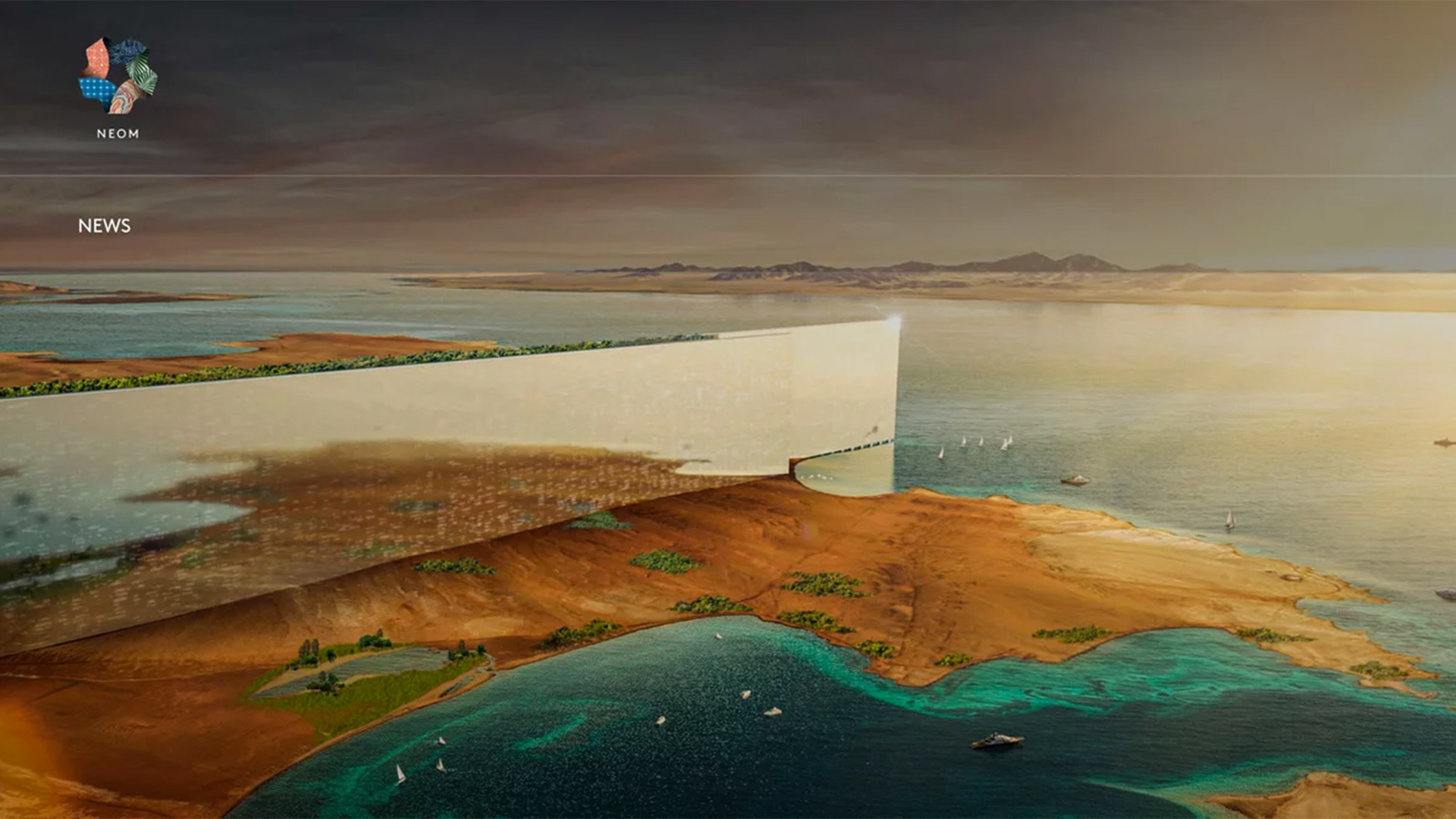 The Line is an ambitious part of Saudi Crown Prince Mohammed bin Salman's plan to diversify the kingdom's economy and remake part of its geography.
Screenshot by NPR/NEOM

A tall and narrow stripe of a city more than 105 miles long, teeming with 9 million residents and running entirely on renewable energy — that's the vision Saudi Arabia's leaders have for The Line, part of a "giga-project" that will reshape the kingdom's northwest.

Newly revealed design concepts show a futuristic walled city — its open interior is enclosed on both sides by a mirrored façade — stretching from the Red Sea eastward across the desert and into a mountain range.

Details emerge about the monolithic city

New stats and designs revealed on Monday include:

Construction has already begun, and Saudi projections call for 1.5 million people to live in The Line by 2030. The unconventional megacity is part of the government's ambitious Neom development project, which released conceptual videos showing the city's high walls enclosing trees, gardens and other plant life, nestling communities among work and recreational structures.

"The designs revealed today for the city's vertically layered communities will challenge the traditional flat, horizontal cities and create a model for nature preservation and enhanced human livability," Saudi Crown Prince Mohammed bin Salman said on Monday, as he unveiled the new designs.

The designers say the structure will maintain an ideal climate year-round, thanks to its mix of shade, sunlight and ventilation. But not everyone was as keen on the concept of living between gigantic walls in the Saudi desert.

"I never seen something more dystopian," one commenter wrote in reply to a video of The Line posted by the Saudi Press Agency. 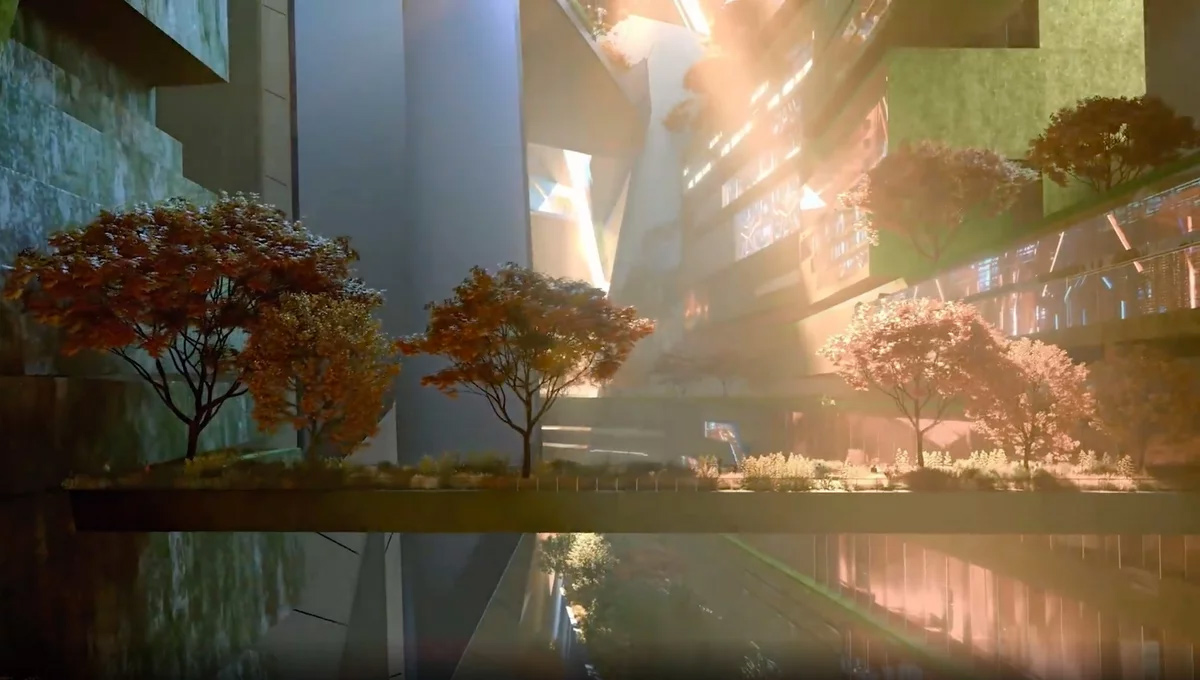 Saudi projections call for 1.5 million people to live in The Line by 2030. The unconventional megacity is part of the Neom project, which released conceptual videos showing the city's high walls enclosing trees, gardens and other plant life, nestling communities among work and recreational structures.
Screenshot by NPR/NEOM

It's like wanting to live on Mars, an expert says

The idea of solving urban problems by creating a city from scratch isn't new. It's been tried before, from Brasília and India's Chandigarh to Malaysia's Putrajaya and Masdar City in Abu Dhabi, as Carlos Felipe Pardo, a senior adviser to the New Urban Mobility Alliance, notes.

"This solution is a little bit like wanting to live on Mars because things on Earth are very messy," Pardo, who's based in Colombia, tells NPR via email.

Despite starting with a clean slate, such elaborate urban plans have generally "created new urban settings where problems have also arisen," Pardo says.

While he grants that the approach can take on some typical city challenges head-on, Pardo says that it doesn't help people already living with problems elsewhere.

Looking at designs for The Line, Pardo worries that its high-tech approach seems to ignore people's desire to simply go outside, to experience something in a city that isn't man-made.

Still, Pardo adds, "I'm sure several characteristics of this design could be integrated into existing cities, and it would be great to have a way of doing so."

Questions arise about the futuristic city

While the project's supporters tout The Line's zero emissions and a smaller footprint than conventional cities, critics note that those utopian ideals will come at an environmental price, as an entirely new city is created in the desert.

Neom is led by bin Salman, who aims to diversify the kingdom's economy and help it respond to climate change. The project is bankrolled by the government's public investment fund.

Questions persist about how tightly Western countries should embrace Saudi Arabia and bin Salman, whom the U.S. says approved a 2018 operation in Istanbul, Turkey, that ended with the gruesome killing of journalist Jamal Khashoggi by Saudi agents.

Saudi Arabia also has been waging a bloody proxy war against Iran in Yemen, and it's done little to address its record of human rights abuses.

In an apparent effort to ease potential residents' concerns about living under the kingdom's restrictive laws, a Neom tourism official recently said that residents would be called "Neomians" and would be subject to different rules, according to the Saudi Gazette.

That comment got wide attention, and Neom then "strongly denied" the idea, saying that while the area would be a special economic zone, it would still be part of the kingdom and "subject to all rules ... related to security, defense and border protection."

Return of rare Ojibwe horse lifts spirits — but still needs help My familia of dancers, a legacy of love for the craft Where the Colorado River crisis is hitting home
By posting comments, you agree to our
AZPM encourages comments, but comments that contain profanity, unrelated information, threats, libel, defamatory statements, obscenities, pornography or that violate the law are not allowed. Comments that promote commercial products or services are not allowed. Comments in violation of this policy will be removed. Continued posting of comments that violate this policy will result in the commenter being banned from the site.