First it was toilet paper. Then cars, then juice boxes, then cream cheese. by NPR/Rina Torchinsky Tweet 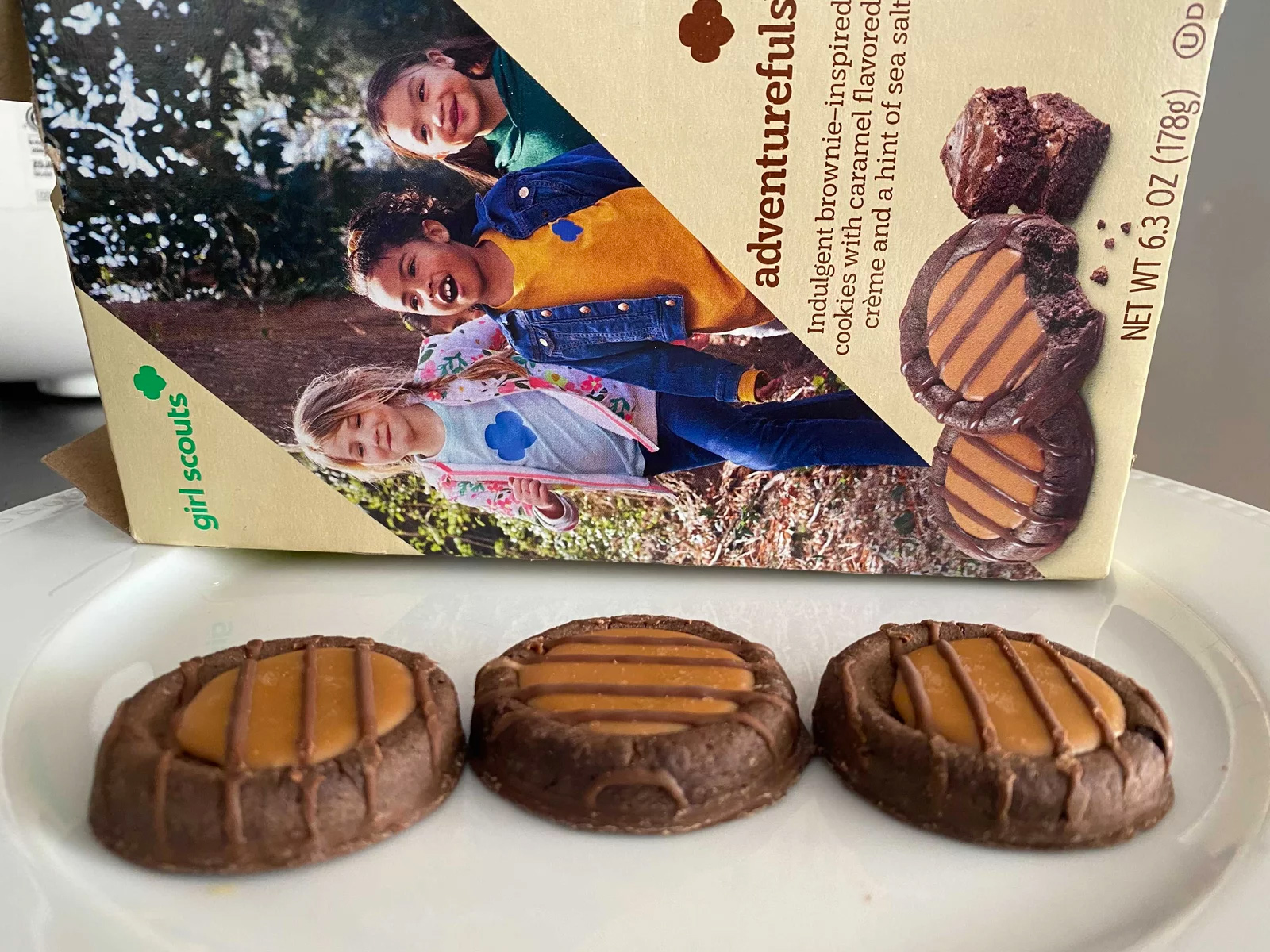 The newest Girl Scout cookie, Adventurefuls, has fallen victim to supply chain and labor disruptions. The brownie-inspired treat features a caramel-flavored creme and a dash of sea salt.
Bill Chappell

Now, you can add Girl Scout cookies to the list of items that have been hit by supply chain woes.

The newest Girl Scout cookie, Adventurefuls, has fallen victim to some supply chain and labor disruptions that have resulted in a "nationwide shortage," according to a recent update for cookie sellers in Suffolk County, Virginia.

The disruptions, first reported by The Washington Post, were short-lived and only affected some local markets, including the greater Washington, D.C. area, a Girl Scouts of America spokesperson said in a statement to NPR on Wednesday.

Adventurefuls, which feature a "caramel-flavored crème" and a dash of sea salt, were much more popular than expected, according to the early January update. To help address the shortage, sales of these "brownie-inspired" cookies for each council will now be capped at just 7% of what was forecasted last November, according to the update. The message asked sellers to "immediately discontinue" sales of the Adventurefuls cookie for in-person orders.

After labor shortages at Little Brownie Bakers, production of Adventurefuls shifted to ABC Bakers. But the Nation's Capital council opted out of ABC's product, Soto-Harmon told NPR. With booth sales set to begin on Feb. 4 and limited volunteers, a second shipment wasn't feasible, she said.

But fear not. So far, Thin Mints, Samoas and Tagalongs — and all other flavors — have come out unscathed. Girl Scouts of America doesn't expect shortages to affect other varieties. And Adventurefuls can still be purchased online.

And the young merchants are still eager to sell, according to Kelly Parisi, head of communications at Girl Scouts of America. About 11,600 booths are already planned in the Greater Washington area alone.

"I wish we had the Adventurefuls for the booth, but, you know, with everything that we've gone through, that is nothing," Soto-Harmon said.

Here's how to watch the total lunar eclipse on May 15 Watch: Congressional District 6 Republican Debate When her son died, a woman turned to gardening. Now, she feeds her entire community
By posting comments, you agree to our
AZPM encourages comments, but comments that contain profanity, unrelated information, threats, libel, defamatory statements, obscenities, pornography or that violate the law are not allowed. Comments that promote commercial products or services are not allowed. Comments in violation of this policy will be removed. Continued posting of comments that violate this policy will result in the commenter being banned from the site.