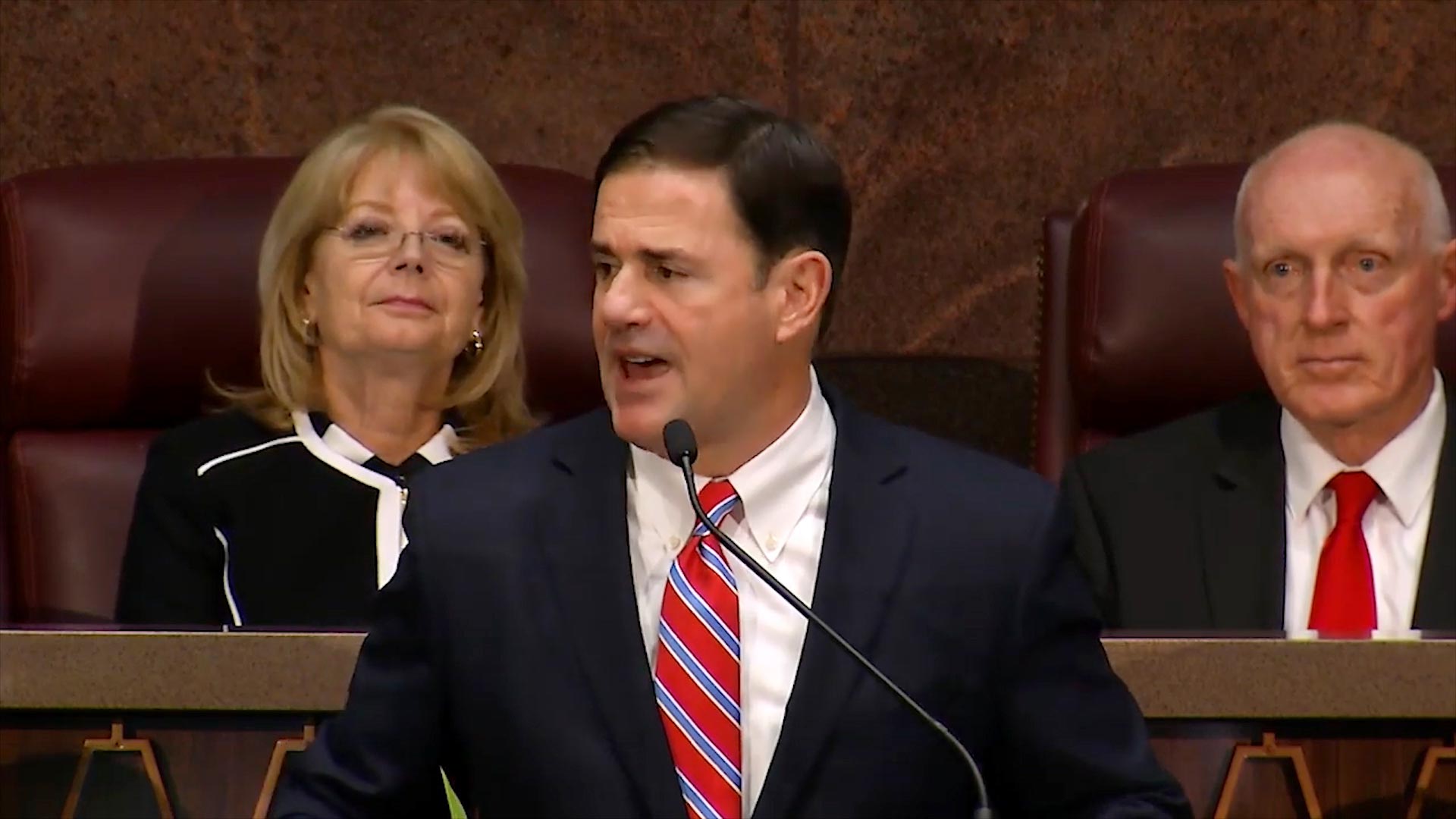 Republican Gov. Doug Ducey delivers his State of the State address at the State Capitol on January 14, 2019.
Office of Governor Doug Ducey

Gov. Doug Ducey says water, education and the border will be key themes of his state of the state address on Monday.

The annual speech will mark the start of the Arizona Legislature's session and lawmakers are returning to the Capitol facing a brighter budget outlook than expected but also an ongoing pandemic, a drought and looming cuts to public schools.

Watch the state of the state address live at 2 p.m. on Monday, January 10 here at news.azpm.org.

The address will be Ducey's last as his second term as governor comes to an end.

The Republican governor would reveal few details about his plans for the session in an interview Friday with Arizona Public Media but touted the state's finances.

The state had a $700 million surplus as of October and $1.7 billion in additional "one-time" revenue, according to the Legislature's Finance Advisory Committee.

"Our financial situation has never been brighter," Ducey said.

However, schools could be forced to cut $1.2 billion in the coming months if a supermajority of legislators do not raise a constitutional cap on school district spending for the current year.

But while school officials have pressed the issue as an urgent one, Ducey did not take the same tone and would not say if he believes the Legislature needs to raise the spending cap.

"I'm going to be releasing my budget priorities a week from today, so you will be able to see where the governor's office is on this and I will continue to communicate with legislative leadership on where we can find common ground," he said.

Aside from continuing to encourage vaccination, the governor did not offer any particular policies to address the rising number of COVID-19 cases around the state and the omicron variant.

"The virus is transmissible. It's a contagious disease and you see these waves in different parts of the country at different times. Arizona's in one of those waves right now," he said.

While Ducey is beginning his final regular legislative session, candidates are already vying to take his place in a race that could have particular significance for the governor's role in certifying Arizona's presidential election results.

Ducey faced pressure from within his own party in 2020 not to certify President Joe Biden's victory in the state.

President Donald Trump even tried calling him as he formalized the results.

Asked if he is concerned that successors could use the office to manipulate the outcome of future presidential elections, Ducey said he trusts voters in choosing Arizona's next governor.

"I have confidence in the voters and that they will make the right decision and they understand the responsibilities in the governor's office," he said.

The governor added: "November is a long ways away."

The Buzz: Legislative leaders on the 2022 session

Arizona Public Media's The Buzz spoke with Republican and Democratic legislative leaders about the issues driving the 2022 session. Listen again.

Governor delivers state of the state address Arizona sees 13,937 new virus cases, more hospitalizations Legislative leaders on the 2022 session
By posting comments, you agree to our
AZPM encourages comments, but comments that contain profanity, unrelated information, threats, libel, defamatory statements, obscenities, pornography or that violate the law are not allowed. Comments that promote commercial products or services are not allowed. Comments in violation of this policy will be removed. Continued posting of comments that violate this policy will result in the commenter being banned from the site.