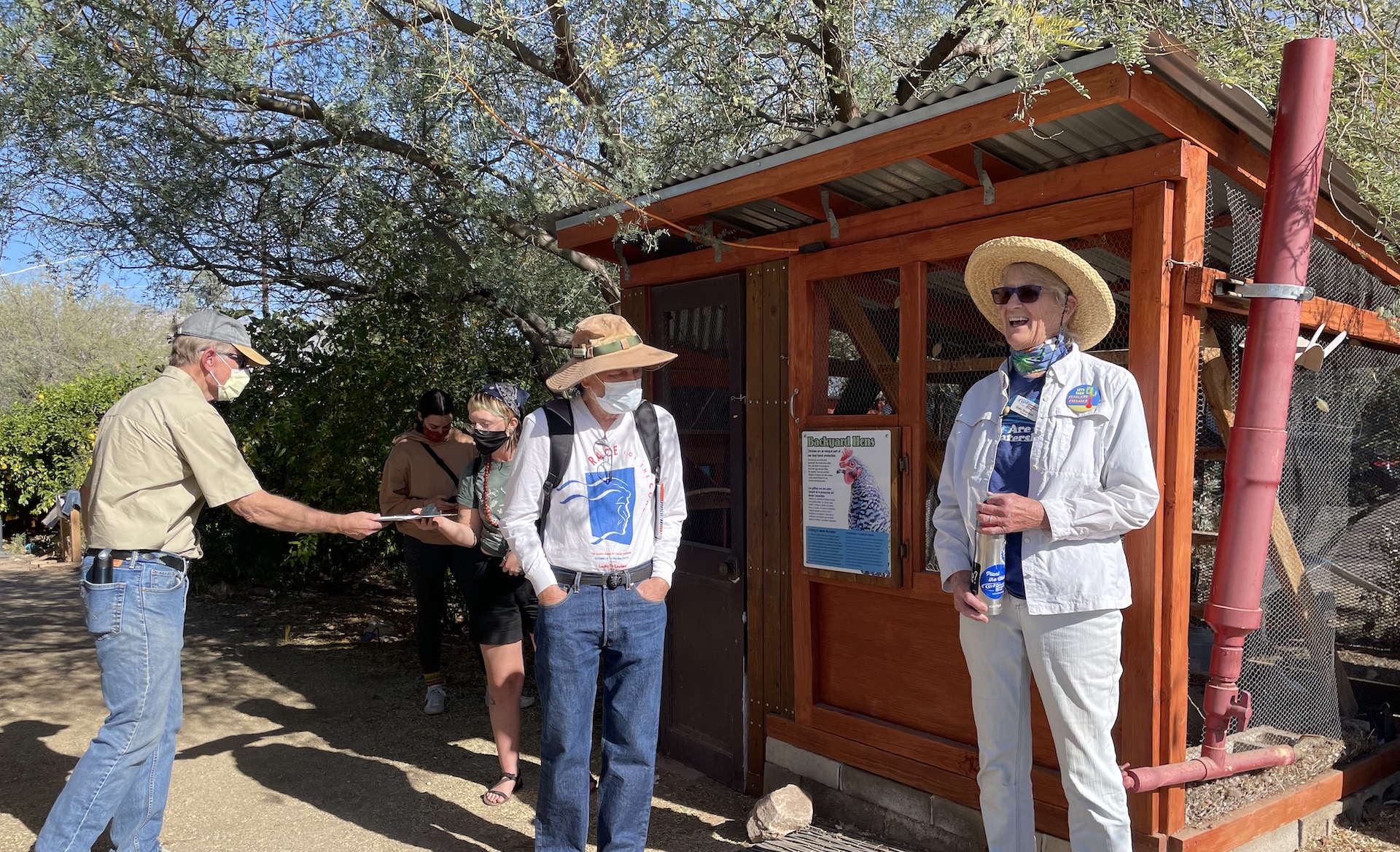 Docent Sally Sherman gives a tour of the Watershed Management Group's Living Lab on December 4th, 2021. The tour shows participants how to conserve water through rainwater harvesting and other means.

On a Saturday morning in early December, Sally Sherman sat on the porch of a house that the Watershed Management Group uses as an office. Next to a garden of fruit trees in front of her were about ten people sitting in the shade and listening. Some had notepads.

“Oh, here comes rainwater. Yeah, and everybody should test this because it's really so nice,” Sherman told the crowd.

Tour participants then filled mason jars and water bottles with rainwater that the group had collected and filtered on site.

Sherman is a docent, and she was midway through giving a tour of the organization’s rainwater harvesting system. The roofs and the yard around the organization’s buildings were outfitted with the landscaping, cisterns and filters the group guides residents to install in their own yards.

Sherman explained how to repurpose the greywater that comes from doing dishes or laundry.

“Depending on how many loads you do in a week, shame to just let that water go down into the sewer,” She said.

The group ranged from homeowners with yards to renters and someone just passing through town, looking to learn more about desert living.

And that’s who the tours are designed for.

Luis Salgado, who heads the organization’s green infrastructure work, said the group hosts interactive tours so participants can swap ideas and take in the information in a way that is more digestible than just reading from the website.

“They always want some ideas, or want some advice, on what they could do to save on their water bill, reduce their water usage and have some thriving plant life in their home landscape,” Salgado said.

He also said the system they promote reduces the amount of city water a house uses.

Even though installing a rainwater harvesting system reduces water bills, it also can cost a lot up front. On average, the price can range from $3,500 to $6,000. The rain tanks are the most expensive element and have gotten pricier due to shortages in the last ten months.

That is why the group also helps locals navigate rebates and grants from the city and the county.

Tucson Water has offered these for over a decade. Its conservation manager, Candice Rupprecht, said the city offers homeowners up to $2,000 to install a system, whether its an active one including tanks, or a passive one across their lawn.

“You're moving your earth around in your landscape, creating berms and basins to keep that water on your property and letting it infiltrate and soak into the ground,” Rupprecht said.

The city rebates and grants have helped cover the cost of about three-thousand systems so far, and estimates they’ve saved about 82 million gallons of water.

Rupprecht also said rainwater is better than tap for gardening.

“It doesn’t have as many salts in it,” Rupprecht said, “So plants really love that pure water that comes from the sky.”

Back at the Watershed Management Group tour, local resident Jack Conn said the estimates tour guide Sally Sherman gave for how much water they could harvest were actually pretty high.

He also said he and his wife are now thinking about installing one before the next monsoon season to get more water to their fruit trees.

The Buzz: Arizona and snow Biden signs water bills benefiting 3 tribes in Arizona New Tucson 80 year water master plan implements rainwater harvesting
By posting comments, you agree to our
AZPM encourages comments, but comments that contain profanity, unrelated information, threats, libel, defamatory statements, obscenities, pornography or that violate the law are not allowed. Comments that promote commercial products or services are not allowed. Comments in violation of this policy will be removed. Continued posting of comments that violate this policy will result in the commenter being banned from the site.