Members of the San Carlos Apache Tribe and students from Brophy and Xavier high schools protested outside Sen. Mark Kelly’s office Thursday, urging the Arizona Democrat to support legislation protecting a sacred site threatened by a proposed copper mine near Superior.

The group of about 20 demonstrators held up signs saying, “Save Oak Flat” and “Senator Mark Kelly – Protect Our Religion.”

Protesters want Kelly to support the Save Oak Flat Act, sponsored in the Senate by Bernie Sanders, I-Vt., and in the House by Rep. Raul Grijalva, D-Tucson. Neither bill has moved forward since the spring.

Kelly’s office did not immediately respond to a request for comment.

The bill aims to protect Oak Flat — considered sacred by Apache and other Indigenous people — from a vast copper mine proposed in the Tonto National Forest about 60 miles east of Phoenix. Mining could lead the land to collapse and leave behind a 2-mile crater. 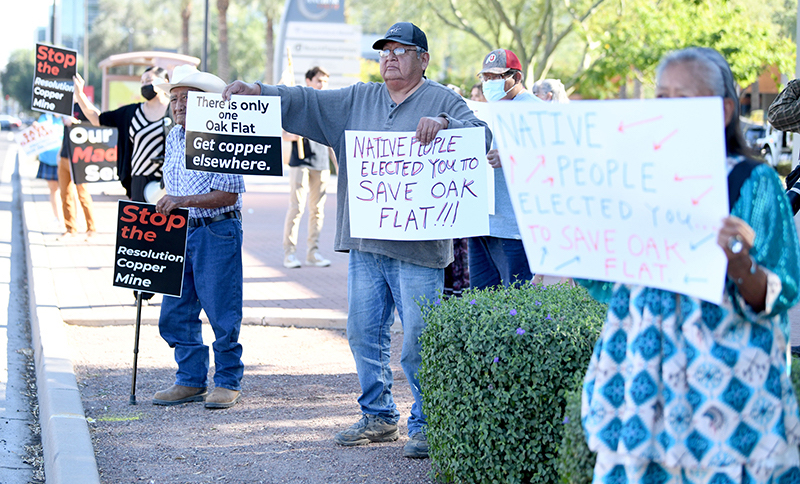 Demonstrators gather outside of the Phoenix office of U.S. Sen. Mark Kelly, D-Arizona, to urge him to support the Save Oak Flat Act, which would protect the site from being destroyed for a copper mine.
Kevin Hurley/Cronkite News

Oak Flat, known to the Apache as Chi’Chil’Ba’Goteel, was federally protected until it became part of a land swap approved by federal officials in 2014. Under the deal, the federal government agreed to exchange public land that included Oak Flat to Resolution Copper, a joint venture by Rio Tinto on BHP.

The land holds religious and cultural significance to Indigenous communities, especially the San Carlos Apache, who still hold ceremonies on the land.

“If there was a huge copper deposit discovered under St. Peter’s Basilica, no one would be like, ‘Let’s mine it even if it destroys the church,’” he said.

Sandra Rambler, a San Carlos Apache, said her ancestors were buried on Oak Flat ground, so she feels strongly about keeping the land sacred and free from mining.

“Leave them alone, leave our way of life alone,” she said.

The bill follows years of uncertainty regarding the status of the land. Arguments in a lawsuit filed in January by the nonprofit Apache Stronghold were made before the 9th Circuit Court of Appeals in October. A ruling is expected next year. The group’s website says its mission is “to battle continued colonization, defend holy sites and freedom of religion.”

Oak Flat appeal heard in U.S. Court of Appeals for the 9th Circuit Ahead of hearing on Oak Flat, a 'spiritual convoy' travels to court New poll shows strong opposition to the proposed copper mine at Oak Flat
By posting comments, you agree to our
AZPM encourages comments, but comments that contain profanity, unrelated information, threats, libel, defamatory statements, obscenities, pornography or that violate the law are not allowed. Comments that promote commercial products or services are not allowed. Comments in violation of this policy will be removed. Continued posting of comments that violate this policy will result in the commenter being banned from the site.