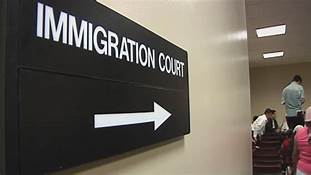 A new policy issued by Immigration and Customs Enforcement discontinues the arrest or detainment of pregnant women and new mothers.

Mayra Alvarado worked with some of them as a social worker with the legal aid group Florence Immigrant and Refugee Rights Project. She said women who are pregnant in detention face different risks to mental and physical health, and many are scared to come forward.

"Sometimes we may miss women who are pregnant or nursing just because of their fear of sharing information, could be because of misinformation in there or just because they’re afraid of what might happen to their child," she said.

The new directive expands upon the Obama-era restriction to include those who are nursing and postpartum.

The watchdog report found most pregnant women are first arrested by Customs and Border Protection. Though the new directive limits ICE detention, it does not do the same for CBP.

The Washington Post reported there are 13 pregnant women currently detained in ICE facilities nationwide who could be released under the new order.

Honoring African American soldiers from last century Arizona's shipping container wall on border is coming down Arizona governor to keep migrant busing program
By posting comments, you agree to our
AZPM encourages comments, but comments that contain profanity, unrelated information, threats, libel, defamatory statements, obscenities, pornography or that violate the law are not allowed. Comments that promote commercial products or services are not allowed. Comments in violation of this policy will be removed. Continued posting of comments that violate this policy will result in the commenter being banned from the site.