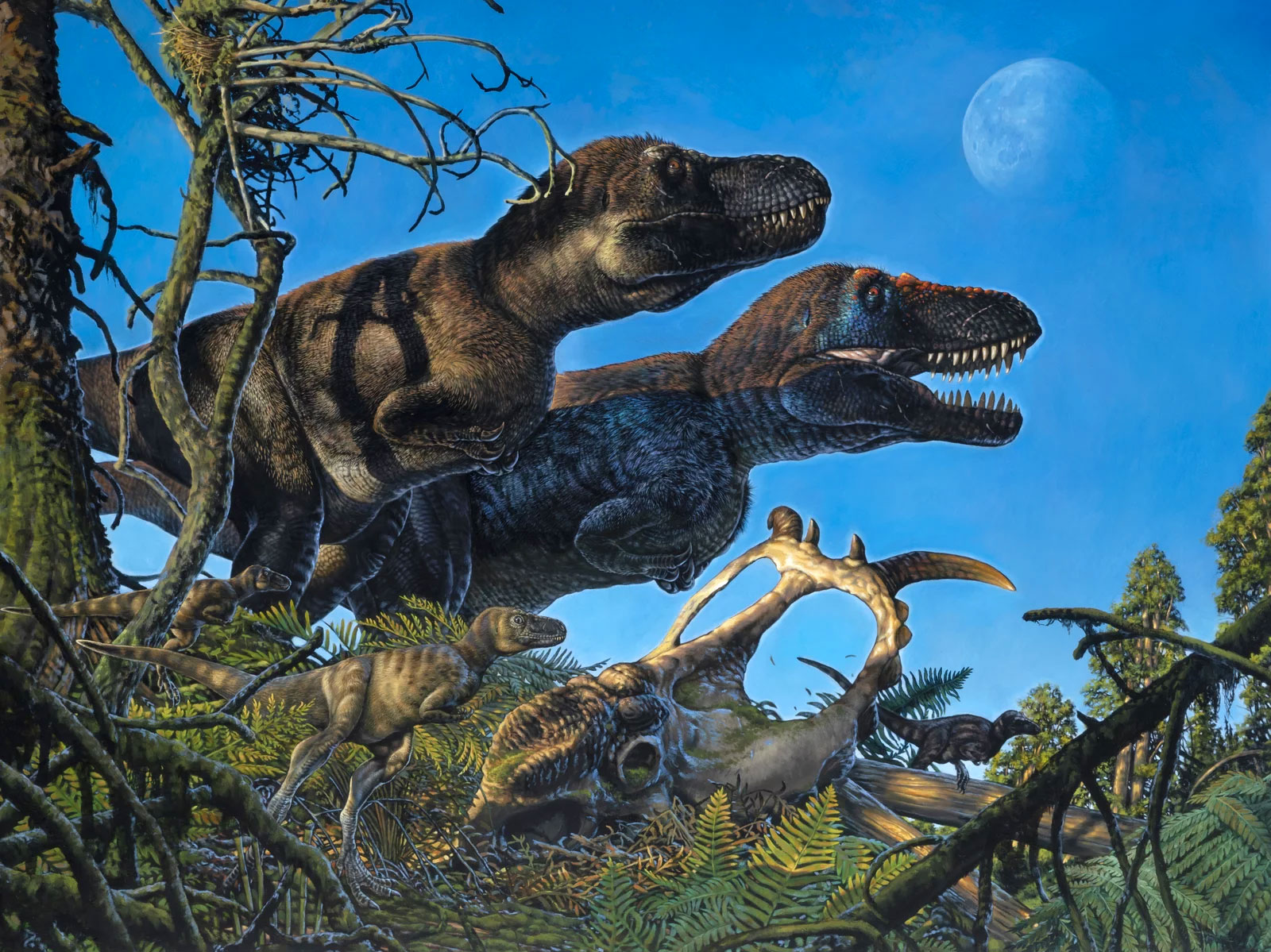 An illustration shows a pair of adult tyrannosaurs and their young living in the Arctic during the Cretaceous Period.
James Havens /Courtesy University of Alaska Fairbanks

Dinosaurs are often depicted as large beasts roaming through tropical forests or across hot deserts — and the humid jungle of Jurassic Park may have gone a long way to solidify those images.

But a study out today in the journal Current Biology contradicts those ideas. It suggests that these creatures also lived year-round in what's now northern Alaska, where they endured freezing winters, snow, and months of darkness.

"Basically, these animals were living at an extreme we didn't think that they could live at," Gregory Erickson, a biological science professor at Florida State University and co-author of the study, tells NPR's All Things Considered.

A key piece of evidence behind his research team's claim is a new collection of bones and teeth from infant dinosaurs dating back to more than 70 million years ago.

Scientists began to unearth dinosaur fossils in the polar regions of the planet in the 1950s. Those findings raised the question of whether dinosaurs lived in the Arctic and Antarctic year-round or if they wandered there seasonally in search of food. But deposits of baby teeth and adolescent bones point to a more permanent residence. 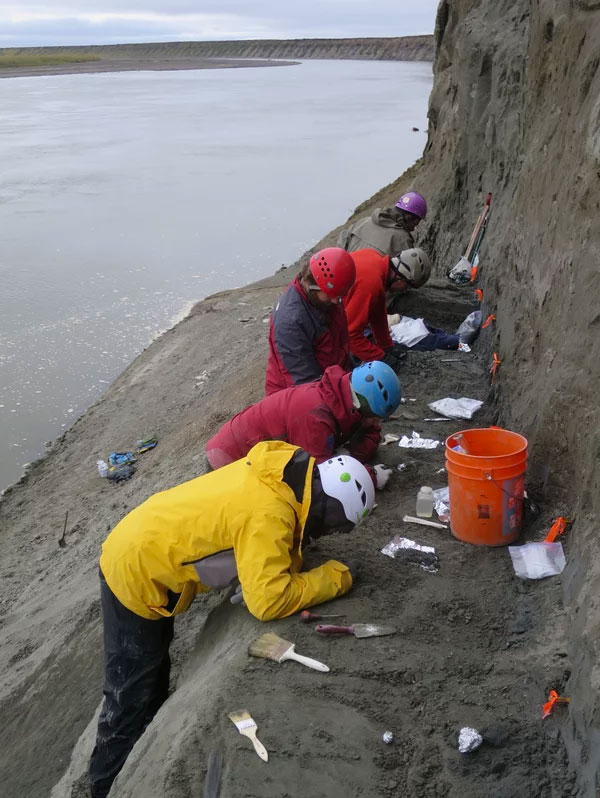 The study's research team members dig for fossils on a shelf on the bluffs above the Colville River on Alaska's North Slope.
Pat Druckenmiller/Courtesy University of Alaska Fairbanks

"I mean, frankly, we were stunned when we found all these different types of dinosaurs, it was like a prehistoric maternity ward up there," Erickson says.

Erickson, along with fellow researchers Patrick Druckenmiller, Donald Brinkman, Caleb Brown and Jaelyn Eberle, traveled four days by car, plane and boat to get to northern Alaska, near the Arctic coast. Even then, some of the excavation sites were only accessible by rappelling off a cliff. They made this trek every August for a decade to collect evidence for their study.

After scraping through the sediment on the banks of the Colville River using dental tools, researchers found the remains of seven different species, including baby Tyrannosaurs, duck-billed dinosaurs like hadrosaurids, and Triceratops relatives.

Given the long incubation times of dinosaur eggs — three to six months for some of the species they identified — the scientists say these dinosaurs must have been year-round residents.

"There really wasn't enough time to both lay the eggs, incubate, hatch and then make that seasonal migration [to a warmer location]," says Michael D'Emic, an associate professor of biology at Adelphi University.

D'Emic wasn't part of the study, but as a fellow dinosaur researcher, he says what impressed him about Erickson's group was not just the find itself, but how tedious the entire process was — from traveling to the Arctic Coast for a short window of excavation to collecting more than a ton of sediment.

The group brought back their findings and, in an effort akin to gold panning, washed the dirt off and sifted through small rocks to pick out tiny bones and teeth fragments.

"They found over 100 bones and teeth that could fit on the head of a pin," D'Emic says. "And then they laboriously pick through it under the microscope for hundreds of hours, if not thousands."

D'Emic says the work also supports the idea that some dinosaurs could regulate their body temperature, just like mammals.

"I wouldn't go so far as to say all [dinosaurs were warm-blooded]," he says, "but I would say it's safe to say that the majority of dinosaur groups were more warm-blooded than cold."

But that leaves more questions for the researchers. Erickson assumes that some of these dinosaurs may have also hibernated underground.

"I can't imagine any of these small animals enduring the cold if they didn't dig burrows and that sort of thing," Erickson says. "But what about the giant ones? What about the giant tyrannosaur we have up there? What were they doing?"

This study may not answer that question, but Erickson says it does prove you can learn a lot about the biggest animals ever to walk the planet just by looking under a microscope.

Scientists Say They Could Bring Back Woolly Mammoths. But Maybe They Shouldn't What We Know About The 13 U.S. Service Members Killed In The Kabul Attack Watch Live: Biden Speaks After U.S. Completes Afghanistan Withdrawal
By posting comments, you agree to our
AZPM encourages comments, but comments that contain profanity, unrelated information, threats, libel, defamatory statements, obscenities, pornography or that violate the law are not allowed. Comments that promote commercial products or services are not allowed. Comments in violation of this policy will be removed. Continued posting of comments that violate this policy will result in the commenter being banned from the site.