Those reliant on the river’s flows for agricultural, municipal and industrial use are gearing up for years of negotiation over future policies. by Luke Runyon, KUNC TWEET SHARE 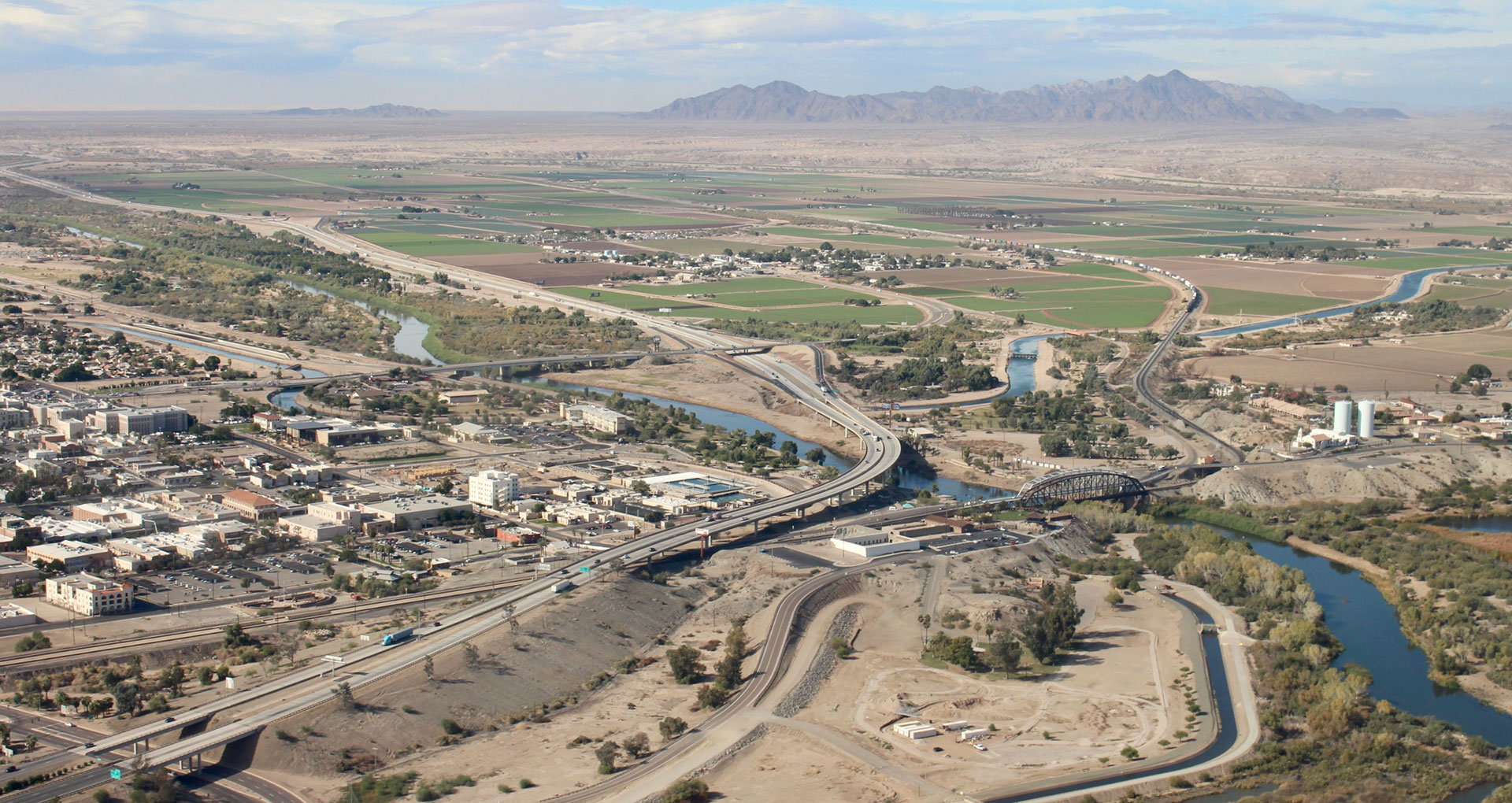 The Colorado River weaves through the Sonoran desert near Yuma, Arizona.
Luke Runyon/KUNC

The Fort Yuma-Quechan Indian Tribe is situated at a nexus in the Colorado River Basin.

That’s true in a geographic sense. The tribe’s reservation overlays the Arizona-California border near Yuma, Arizona. The two states are heavily reliant on water from the Colorado River.

The reservation also abuts the U.S.-Mexico border where the river flows into Mexico for use in cities and on farms. One of the river’s largest irrigation projects, the All-American Canal, was dug through the tribe’s land, and flows from the reservation’s northeastern boundary to its far southwestern corner, on its way to irrigate crops in California’s Imperial Valley. The confluence of the Colorado River and one of its historically important tributaries, the Gila River, is nearby.

The tribe is also at a policy nexus on the river. With irrigated agriculture part of the tribe’s past and present connection to the river, the Quechan tribe is intimately tied to future policies on the Colorado River. In a desert region that sees less than 3 inches of precipitation, the river has been at the heart of the tribe’s survival for generations. With water rights dating back to 1884, the tribe holds some of the oldest rights in the basin. Some of that water feeds the Yuma East Wetlands, a restored area of wetland habitat, now home to at least two endangered marsh birds.

Those reliant on the river’s flows for agricultural, municipal and industrial use are gearing up for years of negotiation over future policies. Climate change is projected to lessen flows in the Colorado River. President Joe Biden’s administration will oversee the bulk of the negotiations, with the country’s first Native American Interior Secretary, Deb Haaland, in a critical role as those talks begin.

KUNC’s Luke Runyon sat down with the Fort Yuma-Quechan Tribe’s president Jordan Joaquin to hear his perspective on the upcoming talks.

This interview has been edited for clarity, and shortened due to time constraints.

Luke Runyon: President Joaquin, you made a statement recently that you welcomed the Biden administration's commitment to having more engagement with the Colorado River Basin tribes, but that you want to see some meaningful changes in how tribes can be involved in decision making in the basin. What kind of changes would you want to see as some of these negotiations get started in earnest?

What do you see as top priorities for your tribe?

Our priorities are to always never lose our water rights, and to protect the assets and our own interest within our tribe. Every tribe has its priorities. Every tribe has its own interests. But when we come to the table, we have to come with a unified voice for all tribes. As we discuss with other tribes, their needs, their priorities, we tell them ours. When we go to the table, we have to have one unified voice to make sure we protect the rights of all river tribes.

What do you see as the most pressing problem that's facing the Colorado River basin?

The drought levels. We have so many pictures of our history and the water was like an ocean coming through our reservation. Water levels were very high. And as I look at the pictures of the past, as I see the river today, it's so low. It saddens me. I see it now. It's just a trickle of water, not as large, not as deep. And as other communities grow upriver, they say, “Well, let's just take the water from the Colorado River.” Well to us downriver, which is (the Quechan Tribe), you're taking a part of our water. So leave our water alone. That is just one of the important things that we have to discuss.

You mentioned that tribes have this unique perspective and this unique cultural connection to the river that maybe other water users in the basin don't necessarily have. Can you explain that just a little bit more?

We lived off the water, the Colorado River. We farmed our own, grew our own vegetables, corn, squash. That was our own farming, if you will, and eating fish. When I say water is life, that's what kept us living for so long and it's still keeping us living. We need to continue that. We have our reservation, the tribe. We lease our land out to our farmers. If we didn't have water for the farmers, then we would not have our farmland to lease. That's why it's so crucial.

One thing I've heard before is that, “if you know one tribe, you know one tribe,” and that there are potential disagreements or different perspectives within tribes in the basin as well. What are some of those ways in which tribes maybe don't see eye to eye on water issues?

For some tribes they may want it to come into an agreement with the city or an entity to say, “Yeah, sure, we'll give you some water to sell or to lease.” But other tribes may be against that and said, “No, don't touch our water.” Every tribe has its own priorities. If it benefits the whole membership as a whole, community as a whole. Absolutely, I'd be looking for options. But what works for (the Quechan tribe) may not work for another tribe upriver.

This interview is part of ongoing coverage of the Colorado River basin, produced and distributed by KUNC, and supported by the Walton Family Foundation.

Bill would allow Indigenous students to wear cultural clothing at graduation A Colorado River showdown is looming. Let the posturing begin When water is scarce, some researchers go underground to find out why
By posting comments, you agree to our
AZPM encourages comments, but comments that contain profanity, unrelated information, threats, libel, defamatory statements, obscenities, pornography or that violate the law are not allowed. Comments that promote commercial products or services are not allowed. Comments in violation of this policy will be removed. Continued posting of comments that violate this policy will result in the commenter being banned from the site.