Inside trees that lived during the last magnetic flip, researchers looked for a form of carbon created when cosmic rays hit the upper atmosphere. by Nell Greenfieldboyce/NPR Science Desk TWEET SHARE 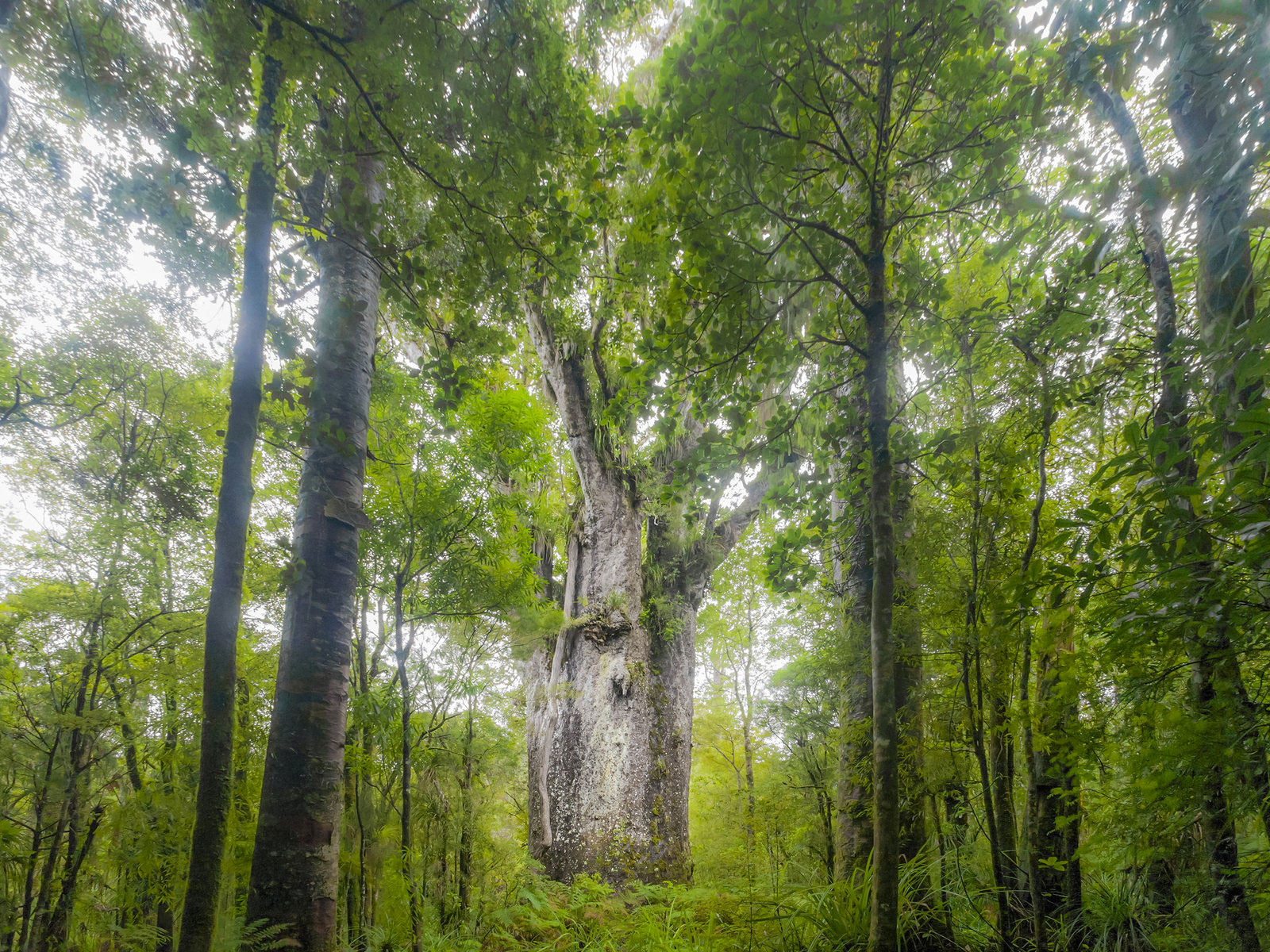 A giant kauri tree grows in Waipoua Forest in Northland, New Zealand. Trees like this one that fell long ago and were preserved for thousands of years are helping researchers discern fluctuations in the Earth's magnetic poles.
Kim Westerskov/Getty Images

An ancient, well-preserved tree that was alive the last time the Earth's magnetic poles flipped has helped scientists pin down more precise timing of that event, which occurred about 42,000 years ago.

This new information has led them to link the flipping of the poles to key moments in the prehistoric record, like the sudden appearance of cave art and the mysterious extinction of large mammals and the Neanderthals. They argue that the weakening of the Earth's magnetic field would have briefly transformed the world by altering its climate and allowing far more ultraviolet light to pour in.

Their provocative analysis, in the journal Science, is sure to get researchers talking. Until now, scientists have mostly assumed that magnetic field reversals didn't matter much for life on Earth — although some geologists have noted that die-offs of large mammals seemed to occur in periods when the Earth's magnetic field was weak.

The Earth is a giant magnet because its core is solid iron, and swirling around it is an ocean of molten metal. This churning creates a huge magnetic field, one that wraps around the planet and protects it from charged cosmic rays coming in from outer space.

Sometimes, for reasons scientists do not fully understand, the magnetic field becomes unstable and its north and south poles can flip. The last major reversal, though it was short-lived, happened around 42,000 years ago.

This reversal is called the Laschamp excursion, after lava flows in France that contain bits of iron that are basically pointed the wrong way. Volcanic activity back then, during the flip, produced this distinctive iron signature as the molten lava cooled and locked the iron into place. Iron molecules embedded in sediments around the world also captured a record of this magnetic wobble, which unfolded over about a thousand years.

"Even though it was short, the North Pole did wander across North America, right out towards New York, actually, and then back again across to Oregon," says Alan Cooper, an evolutionary biologist with Blue Sky Genetics and the South Australian Museum. He explains that it "then zoomed down through the Pacific really fast to Antarctica and hung out there for about 400 years and then shot back up through the Indian Ocean to the North Pole again."

These changes were accompanied by a weakening in the magnetic field, he says, to as low as about 6% of its strength today.

He and colleague Chris Turney, an earth scientist at the University of New South Wales, found a new way to study the exact timing of all this, using unusual trees in New Zealand.

Giant kauri trees can live for thousands of years and can end up well preserved in bogs. "The trees themselves are quite unique," says Cooper. "They're a time capsule in a way that you don't really get anywhere else in the world."

Inside trees that lived during the last magnetic flip, the researchers and their colleagues looked for a form of carbon created when cosmic rays hit the upper atmosphere. More of these rays come in when the magnetic field is weak, so levels of this carbon go up.

The trees, with their calendar-like set of rings, took in this kind of carbon and laid it down as wood. That let the researchers see exactly when levels rose and peaked and then fell again. One tree in particular had a 1,700-year record that spanned the period of the greatest changes.

By creating a precise timeline, the research team was able to compare the magnetic field's weakening to other well-established timelines in the archaeological and climate records. They also turned to advanced climate modeling to try to understand how the magnetic changes would have affected conditions on the planet. The ozone layer, in particular, would have taken a beating.

"If you damage the ozone layer, as we've found out, you change the way in which the sun's heat actually impacts the Earth," says Cooper. "And as soon as you start doing that, you change weather patterns because wind directions and heating goes AWOL, goes all over the place."

If the sun went through one of its periodic conniptions when the strength of the Earth's magnetic field was turned way down, he says, a solar flare or storm would have sent a burst of radiation that could have had massive consequences for people living back then.

"This is what we think actually drove them into caves," says Cooper. "You would not want to be outside during daylight hours."

He admits that it's difficult to draw clear links among all these various events "at this stage. But I think that's always true when you're putting forward such a radical new theory." He notes that the idea of an asteroid killing off the dinosaurs once seemed far-fetched as well.

Other researchers say they're really struck by the fact that the scientists were able to construct such a detailed record of the timing of magnetic changes by looking at these trees.

"That high-resolution temporal record is, I think, pretty impressive," says Brad Singer, a geologist at the University of Wisconsin-Madison who studies the history of the Earth's magnetic field but was not part of the research team. "This is only a small number of specimens that they measured, but the results look fairly reproducible in the different trees, and I think that's a pretty impressive set of data."

He thinks this report will steer people's attention to do work that could test this proposal that reversals of the Earth's magnetic field could disturb its life.

James Channell, a geologist at the University of Florida, questioned whether other kinds of historical records, like ice cores, support the idea of a global climate crisis around 42,000 years ago. He works mostly on the North Atlantic, he says, and isn't aware of anything very dramatic going on there at that time.

Still, he has previously written about the possibility that magnetic field weakening was linked to die-offs of large mammals, so he was "thrilled" to see someone else connecting those two things. Large mammals, he notes, are long-lived and susceptible to damage from prolonged exposure to the ultraviolet radiation that would increase during periods when the magnetic field was weak.

"From what we know about field strength through time, over the last hundred thousand years," says Channell, "there does appear to be a linkage between extinctions and low geomagnetic field strength." "We really think actually there's quite considerable impacts going on here," says Cooper.

Archaeologists Discover Additional Dead Sea Scroll Fragments In Desert Caves Biden Holds 1st Press Conference As President Some Generous Apes May Help Explain The Evolution Of Human Kindness
By posting comments, you agree to our
AZPM encourages comments, but comments that contain profanity, unrelated information, threats, libel, defamatory statements, obscenities, pornography or that violate the law are not allowed. Comments that promote commercial products or services are not allowed. Comments in violation of this policy will be removed. Continued posting of comments that violate this policy will result in the commenter being banned from the site.