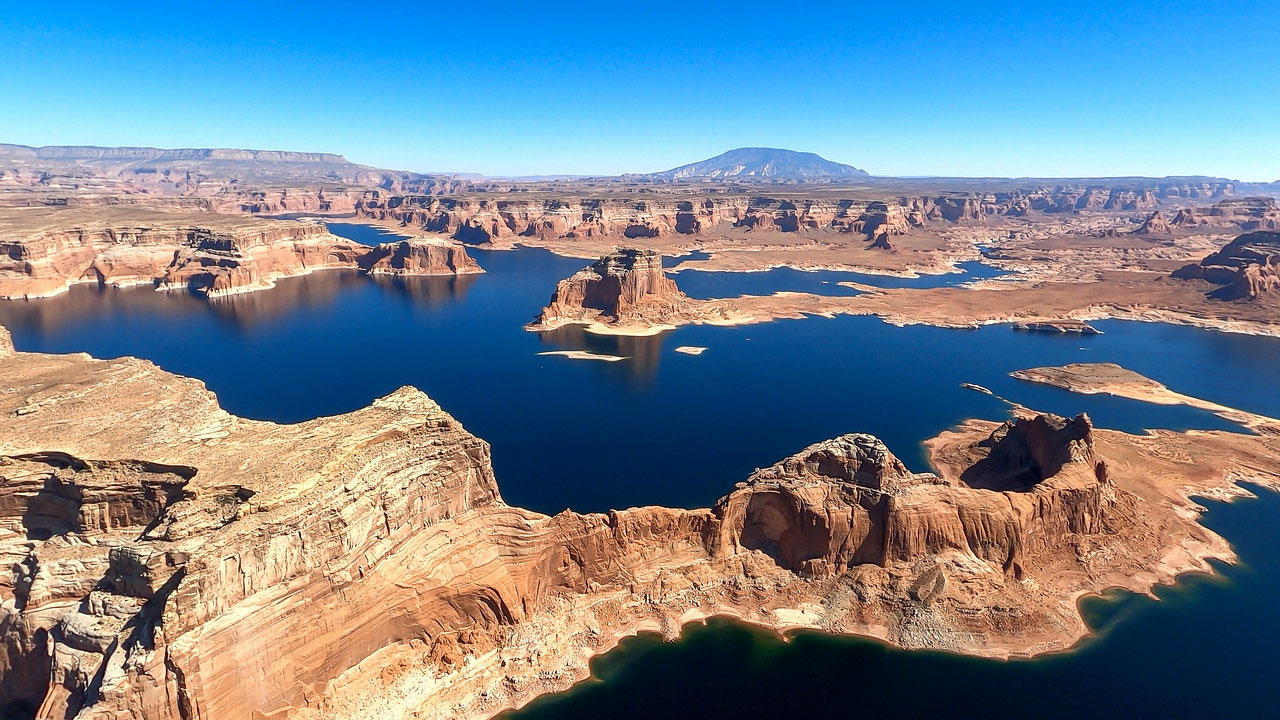 A proposed pipeline project in southern Utah would transport water from Lake Powell to fast-growing communities in the state's southwest corner. The proposal hit political headwinds this year, as other Colorado River users objected to it.
Credit waterdesk.org/lighthawk.org

This has been a tough year for some of the Colorado River basin’s long-planned, most controversial water projects.

Proposals to divert water in New Mexico, Nevada and Utah have run up against significant legal, financial and political roadblocks this year. But while environmental groups have cheered the setbacks, it’s still unclear whether these projects have truly hit dead ends or are simply waiting in the wings.

The watershed’s ongoing aridification —with record-breaking hot and dry conditions over the last 20 years and lessened federal financial support for large-scale water projects — is adding more pressure on projects that attempt to divert water to fast-growing communities or slow the purchase of agricultural water supplies.

In New Mexico, a “solid plan” fails to materialize

For years, environmental journalist Laura Paskus has been following the twists and turns of a proposed project in New Mexico’s southwest corner, called the Gila River diversion.

Introduced in 2004, when Arizona settled tribal water rights with the Gila River Indian Community, the diversion was billed as a way to provide much needed water supplies for four mostly rural New Mexican counties. 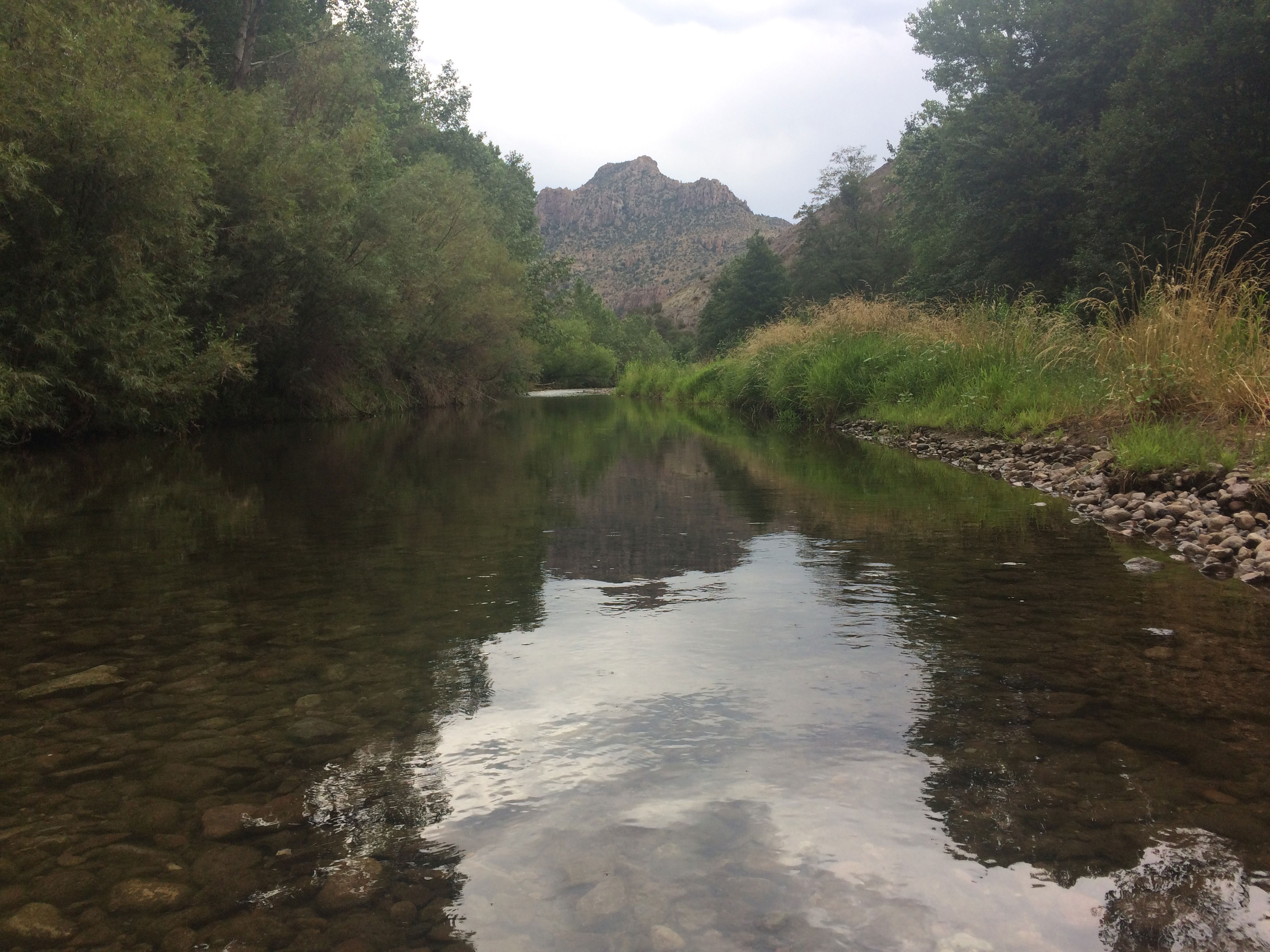 VIEW LARGER The Gila River in southwestern New Mexico has been the subject of a long-planned proposal to divert its water since 2004.
Laura Paskus

“The most recent plan was to build this diversion in the Cliff-Gila Valley,” Paskus said. “And to provide water to irrigators,” like farmers and ranchers.

What propelled the project forward was a federal subsidy to cover some of the costs associated with planning and building. Thorny questions over the project’s total cost, its eventual operation and the financial burden of those who would receive the water were present from the start, Paskus said, but the idea of leaving federal dollars unspent kept the effort alive for more than a decade.

Failure to come up with a plan finally sank the proposal in June this year. The New Mexico Interstate Stream Commission, which had thrown its weight behind the project five years earlier, voted to stop spending money on environmental reviews related to the diversion. Roughly $17 million had already been spent on engineering plans and consultants over the years.

“It was a big surprise,” said Allyson Siwik, director of the Gila Conservation Coalition, one of the environmental groups opposed to the project. “Because all the other times we thought it might go away, it never did.”

The total cost of the Gila River diversion would have made the water it eventually provided unaffordable to those who wanted it, Siwik said.

“So it really came down to cost, which has been the issue all along. All of these iterations of diversions, dams and storage projects have all basically failed because of cost,” Siwik said. 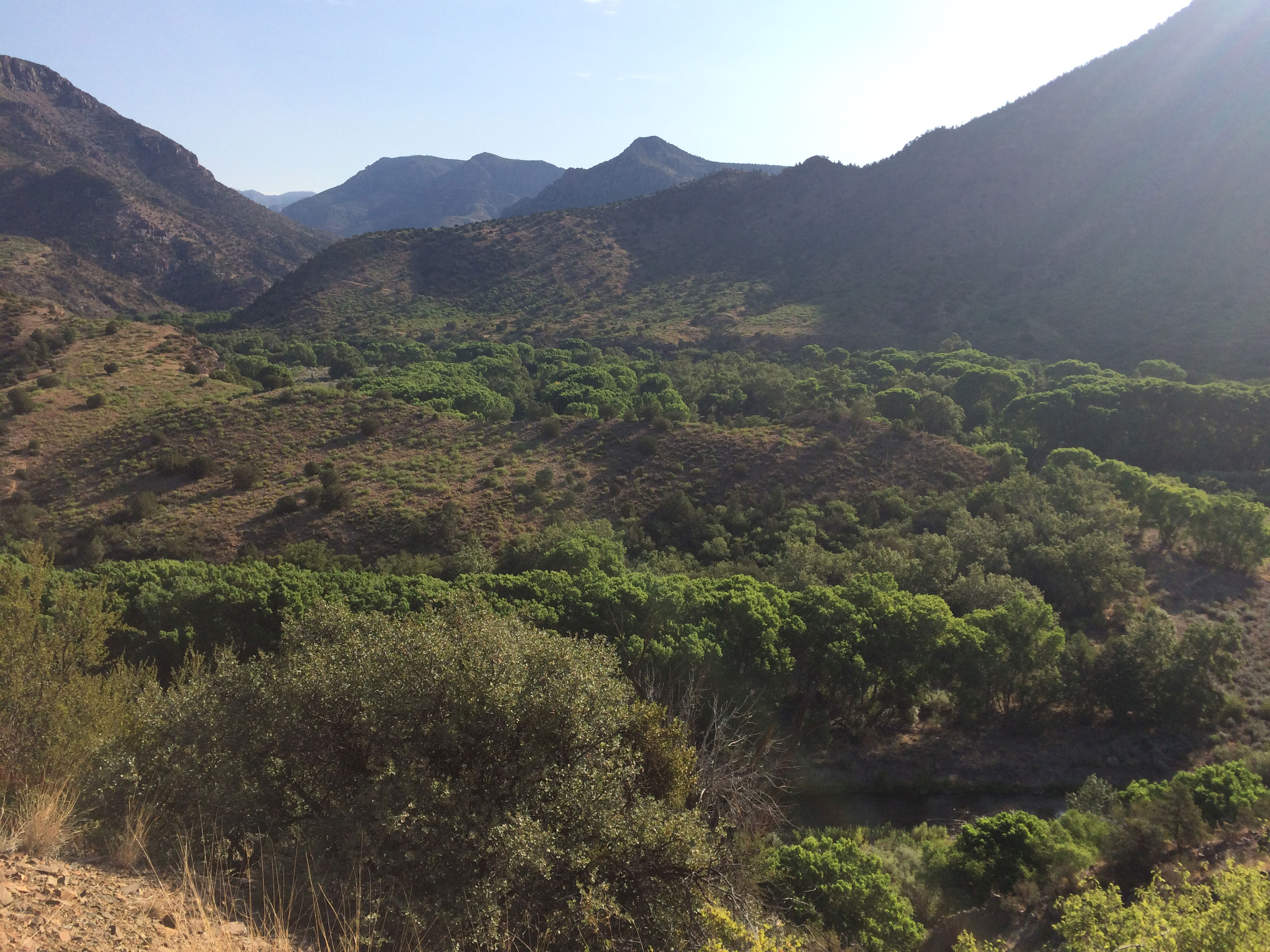 VIEW LARGER The Gila River starts in New Mexico and flows into Arizona, as part of the Colorado River watershed.
Laura Paskus

When news came this summer that the diversion project had lost the state’s support and resources, the battle seemed to be finished, for now.

“It was time. You just couldn’t keep spending money on this, especially when the economics, the financials just didn’t pencil out,” she said.

A similar drama played out in Nevada earlier this year. For decades water providers in Las Vegas have pursued a $15 billion plan to pump groundwater from northern Nevada and pipe it 300 miles south to the fast-growing metro area in the Mojave Desert.

“Fifteen, 20 years ago, you were hearing folks down in Vegas scream bloody murder that, ‘If we don't get this water, the world is going to explode, children are gonna be starving and dying of dehydration,’” said Kyle Roerink, director of the Great Basin Water Network. The group of environmentalists, tribal members and ranchers formed to oppose the so-called Las Vegas pipeline.

The Southern Nevada Water Authority, the agency pushing for the pipeline, hit legal hurdles this past spring. Just as the coronavirus pandemic was taking hold, a judge denied some water rights associated with the project. A month later the water authority chose not to appeal and tabled the pipeline altogether.

“So that was almost a de facto white flag surrender,” Roerink said.

Instead, the water authority recommitted to its well-known conservation programs to keep water use in check while adding new customers, and continued to explore options for water reuse and recycling. The city relies heavily on the Colorado River, which forms Lake Mead just outside its boundaries.

But while some of the water rights associated with the pipeline are no longer viable, the agency retains ownership of some rural ranches in the region where groundwater pumping was proposed. And Roerink is convinced that if climate change were to significantly worsen on the Colorado River, the agency would be tempted to revive the pipeline.

“I'm using the past tense very cautiously,” he said.

Rising costs have long been at the heart of criticism over the Lake Powell pipeline, a proposal to spend upwards of $2 billion to build a 140-mile water pipeline from the beleaguered Colorado River reservoir to rapidly expanding communities in southwest Utah.

But you can now add political and potential legal troubles to the mix of factors that could put the pipeline’s future in question. And seeing the successes in other parts of the Southwest are giving Utah’s environmental advocates hope that it too can be derailed completely.

“The state of Utah is proposing to divert Colorado River water down the Lake Powell pipeline simply to use more of its water rights out of the Colorado River,” said Zach Frankel, director of the Utah Rivers Council, one of the groups opposed to the pipeline. 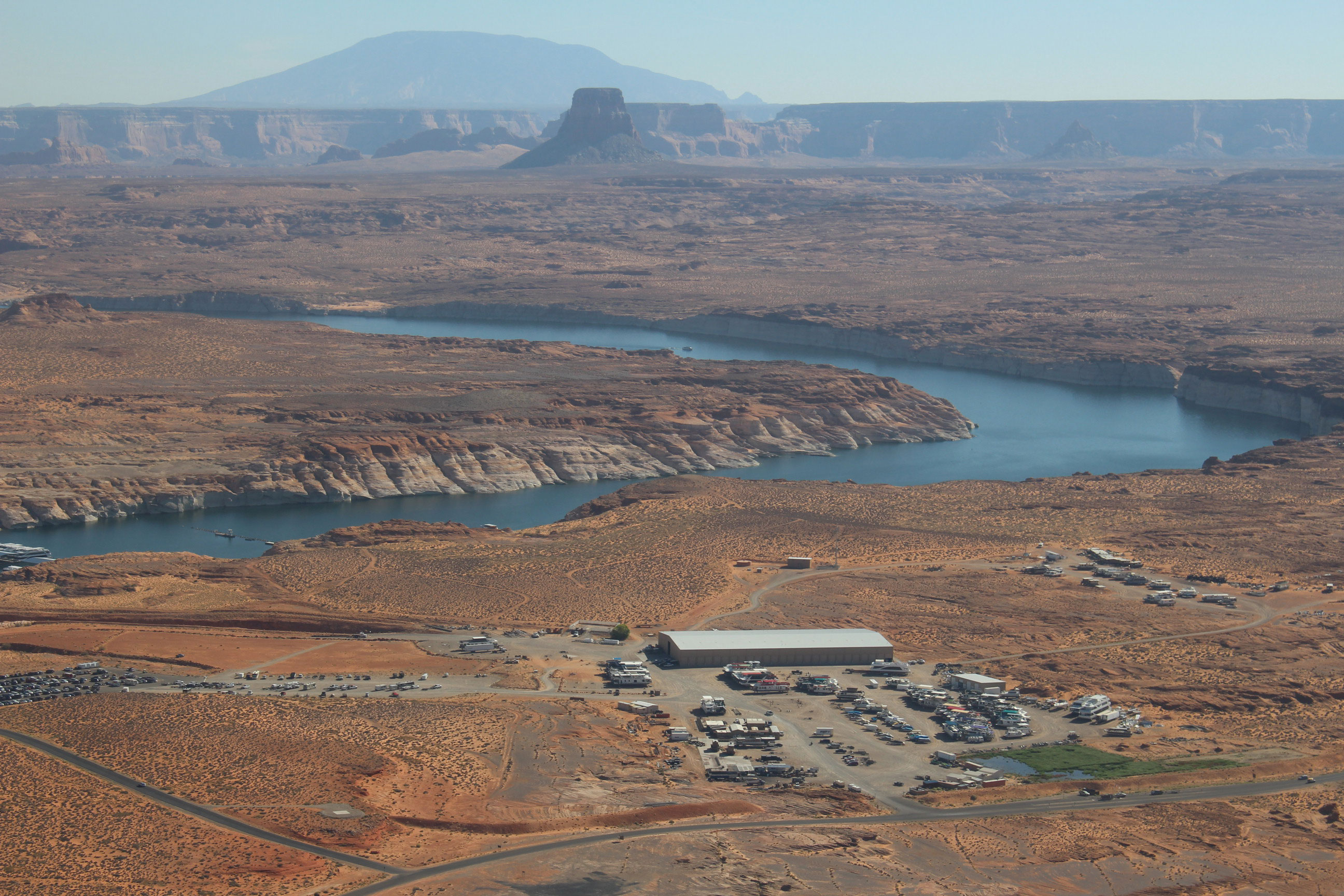 VIEW LARGER A proposal to pipe water out of Lake Powell and deliver it to communities in southwest Utah led to a backlash from the six other U.S. states that rely on the Colorado River.
Luke Runyon/KUNC

But opposition to the pipeline doesn’t end with environmentalists. Political pressure from other users on the river is slowing it down. In September, in the midst of a new environmental review from the Bureau of Reclamation, every other state that relies on the river besides Utah teamed up to say the project has too many unresolved issues to move forward.

“We were pleasantly surprised to see six states come together to oppose the advancement of the Lake Powell pipeline,” Frankel said. “It’s a very strong letter because it openly threatens litigation.”

The pipeline was on a list of infrastructure priorities from the Trump administration. But Frankel said the opposition from surrounding states could force Utah to the negotiating table with the rest of the basin states. The project is still in a federal permitting process, and could be influenced by the priorities of president-elect Biden and a new Department of Interior secretary.

Within three weeks of the six states sending their letter critical of the pipeline project, proponents asked the Bureau of Reclamation for an “extended timeline” to consider more comments submitted on their draft environmental impact statement, including those from “fellow Colorado River Basin states.”

“The good old boy agreement in the Colorado River basin has been to keep your head down and don't oppose other states’ new water projects, which is fine until lower basin communities have to start walking away from their water supply,” Frankel said.

But just because one iteration of a project is sidelined, doesn’t mean it’s gone forever. In New Mexico, journalist Laura Paskus said the water rights that are foundational to the Gila River project, part of a complicated exchange agreement with the Gila River Indian Community, are still held by the state and could be used to justify another diversion down the line. Members of the New Mexico Interstate Stream Commission made clear that they were just ending funding for the project, not abandoning the rights.

But the bigger threat to these projects than any political, legal or financial roadblock, Paskus said, is climate change. The Colorado River basin is entering its third decade of drier-than-normal conditions, after a string of record-breaking hot years. States, cities and irrigation districts can point to agreements that promise them a certain amount of water each year.

But it’s increasingly clear there’s not enough to go around now, she said, let alone fill a new reservoir or pipeline without someone downstream feeling the effects.

“I think we're at least getting the idea now that these old style projects are just not going to work for so many reasons,” Paskus said.

The lesson here, according to Paskus, is that many of these proposals rely on outdated ideas about our relationship to water in the arid West, and that plans will have to change as the region warms.

For decades the federal government was willing to front the costs of large-scale water development. But that era seems to be done, Paskus says.

“We haven't quite evolved to address climate change, but we know enough to know that those old ways are not going to work no matter how much money we throw at them.”

Major changes in environmental policy expected under Biden Differences between Arizona’s new recreational pot law and medicinal use rules Arizona farmers prepare for water cuts
By posting comments, you agree to our
AZPM encourages comments, but comments that contain profanity, unrelated information, threats, libel, defamatory statements, obscenities, pornography or that violate the law are not allowed. Comments that promote commercial products or services are not allowed. Comments in violation of this policy will be removed. Continued posting of comments that violate this policy will result in the commenter being banned from the site.