In Arizona, building a wall — and destroying a canyon

In a mountain range too steep to cross, the Department of Homeland Security is spending millions of dollars on five miles of border wall. by Maya Kapoor and Ariana Brocious Tweet 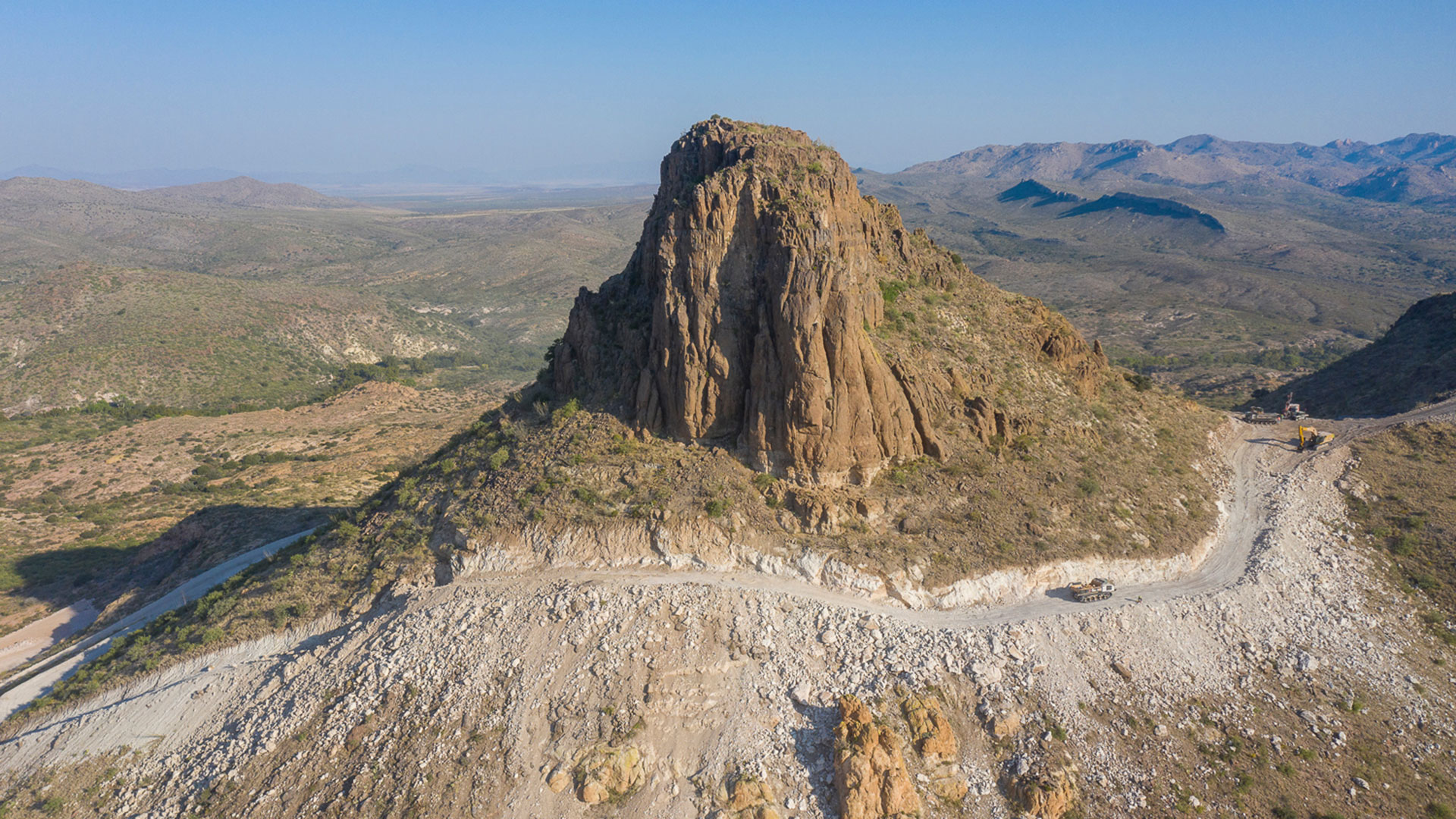 Guadalupe Canyon is a remote, rugged area in the Southwest where the Trump administration is currently racing to complete construction of a border wall.
John Kurc

Diana Hadley, a retired environmental historian, knows firsthand the remoteness of Guadalupe Canyon, a lush riparian corridor spanning northern Mexico and the Southwestern United States. In the early ’70s, she and her then-husband raised three children there while working on a cattle ranch and living off-grid. The location had its hardships: Once, a huge monsoon storm damaged the road into the canyon so badly, her family had to pack supplies in by mule for six months. Still, Hadley recalls the canyon as “a really exciting, beautiful place to live.” The canyon walls themselves were “absolutely beautiful,” Hadley said. “They’re really steep, and they’re rosy-colored rock.”

Now, some of those rock walls are crumbling. Racing to fulfill President Donald Trump’s campaign promises, the Department of Homeland Security is dynamiting cliff sides and carving switchback roads up incredibly steep mountains to build a 30-foot-tall border wall through Guadalupe Canyon. Not only is the construction expensive, it will have little impact on undocumented immigration into the U.S. It will, however, destroy an important North American wildlife corridor.

Not many people visit Guadalupe Canyon, home to multiple bands of Apache, today known collectively as the Chiricahua Apache. But for wildlife, it’s an essential travel destination. Cottonwoods and sycamores tower over streams and springs, providing habitat for birds rarely found in the United States, including violet-crowned hummingbirds and aplomado falcons.

The canyon is part of the isolated and rugged Peloncillo Mountains, a habitat corridor between northern Mexico and the Southwestern U.S. that is traversed by ocelots, black bears, mountain lions, white-nosed coati and even jaguars — the region is federally designated critical habitat for the endangered cats. Local landowners, nature geeks and land managers alike recognize the region’s importance: Canyon sections have been designated a wilderness study area by the Bureau of Land Management, and an important bird area by the National Audubon Society. Nearby ranches have conservation easements. Tucked into the corner of Arizona's border with New Mexico, the canyon is also very remote. It’s about 30 miles from the nearest town, Douglas, Arizona. 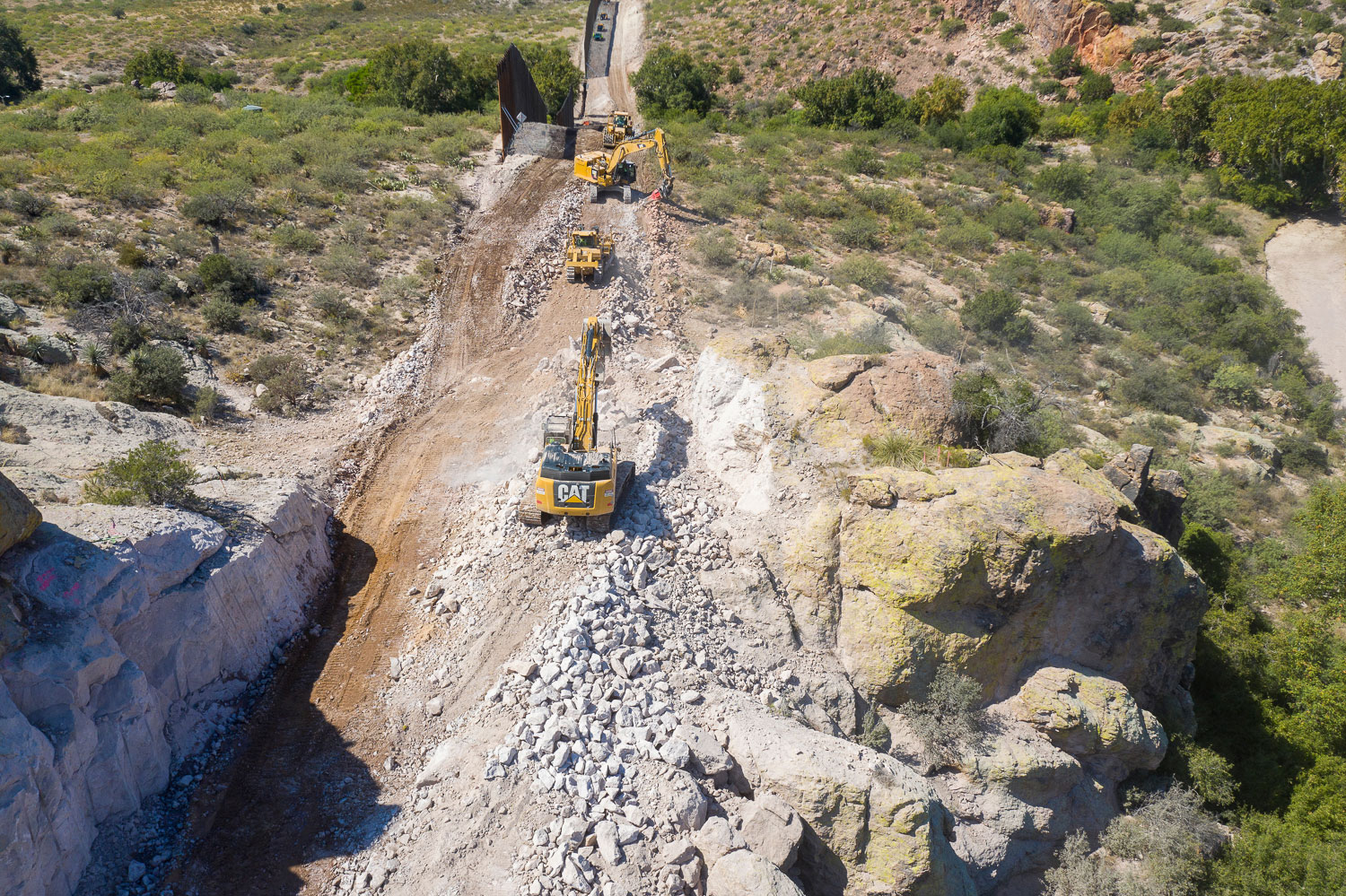 Because the Department of Homeland Security does not release information on the specific locations of border apprehensions, it’s hard to know how significant a route Guadalupe Canyon is for undocumented migrants. Still, according to the Arizona Daily Star, the number of people apprehended while crossing the border illegally in the Tucson sector, of which Guadalupe Canyon is a part, hit a three-year low this past April.

“It’s in the middle of nowhere,” Louise Misztal, conservation director of the nonprofit Sky Island Alliance, said. “There’s not any kind of security issues in these areas. There’s no emergency, and there’s no security issue — which makes it that much more atrocious, that they’re just destroying this mountain range.”

Environmental destruction in the name of border security is happening across Arizona and the Southwest. U.S. Customs and Border Protection maintains that the new construction fulfills the agency's "operational requirements to secure the southern border," but its effectiveness in deterring undocumented immigration is unclear. Last year, the Center for Migration Studies reported that more undocumented migrants in the U.S. overstay visas than cross its international borders illegally.

But since 2019, contractors have followed Trump's bidding, building new 30-foot-high steel bollard walls across most of Arizona's border with Sonora, Mexico, mostly across federally protected lands, including national monuments and national parks. Construction has already severed critical binational riparian wildlife corridors and impacted scarce water sources, such as the San Pedro River, the San Bernardino wetlands and Quitobaquito Springs, a culturally significant site to several Indigenous nations and the only habitat for several endemic species, including the Sonoyta mud turtle and Quitobaquito pupfish. Customs and Border Protection claims to be monitoring water levels and other environmental impacts in sensitive areas and working "to minimize impacts when and where possible."

Guadalupe Canyon is incredibly steep, so the Department of Homeland Security is building switchback roads and blasting cliff sides, simply to enable construction vehicles to access the U.S.-Mexico border. Witnesses say habitat and ranchland are being damaged, while debris from construction blasts is falling on both sides the international border.

Myles Traphagen, the Borderlands Program Coordinator for the nonprofit Wildlands Network, is working with photographer John Kurc to document the destruction in the U.S. and the potential fallout in Mexico. If construction is, indeed, depositing rubble in Mexico, Traphagen attributes the contractors’ cavalier behavior to a culture of lawlessness pervading border wall projects. Under the Illegal Immigration Reform and Immigrant Responsibility Act of 1996, and other legislation passed in the wake of the Sept. 11 terrorist attacks, the federal government gained the authority to build border barriers and waive federal laws that hindered that work. So far, the Trump administration has waived more than 60 laws, including the National Environmental Protection Act, the Endangered Species Act, and the Native American Graves Protection and Repatriation Act, to build its wall.

“The crux of this whole thing is that because of the waivers that are issued (for border wall construction) for virtually all environmental and cultural laws, and the fact that there never had to be any environmental review, the construction culture is completely lawless,” Traphagen said. 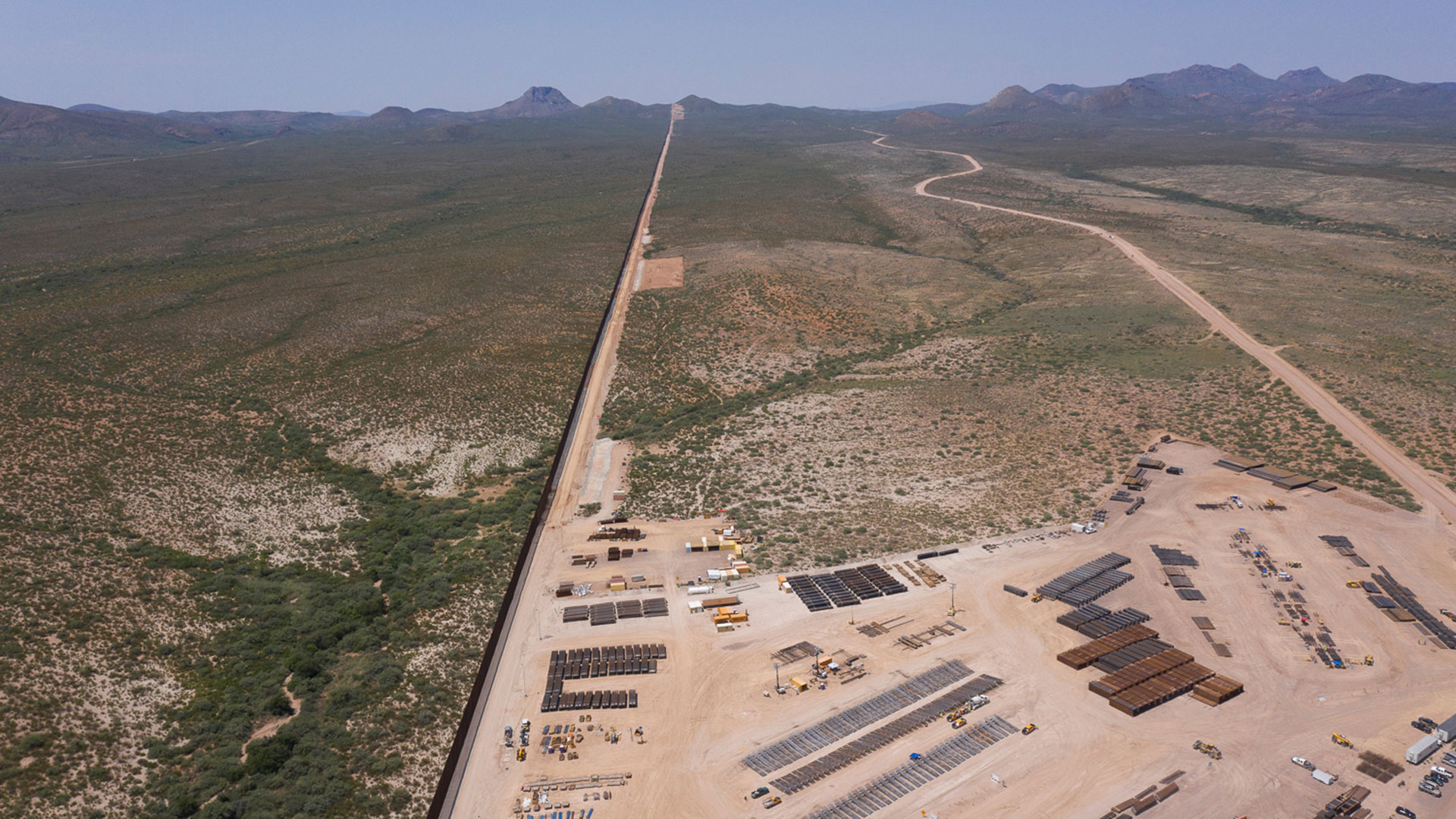 Sally Spener, foreign affairs officer for the International Boundary Water Commission (IBWC) would not comment on the legality of an American construction project impacting Mexican land. IBWC public affairs officer Lori Kuczmanski acknowledged that the agency had received complaints from a ranch owner in Mexico about debris on private property. However, she said that an IBWC engineer investigated and concluded that the rubble was on the U.S. side of the border. According to Kuczmanski, the wall is being built 800 feet north of the international boundary, and any debris is falling on American soil.

However, José Manuel Pérez, director of operations of the nonprofit Cuenca los Ojos Foundation Trust, which owns several ranches on the Mexican side of the border, maintains that he has seen rubble on a small section of the organization’s private property in Mexico, and that the Mexican government has not responded to complaints.

But focusing on the rubble may obscure the larger story. Pérez is more concerned about the wall’s impacts upon the organization’s broader mission — and the region’s ecology. “Cuencas los Ojos as a nonprofit is trying to preserve wildlife corridors between two nations,” he explained. “That wall totally cuts (off) our intentions to restore and protect those wildlife corridors.”

In addition to impacting wildlife more than immigration policy, the Guadalupe Canyon section of wall is also expensive. According to Jay Field, a public affairs officer with the U.S. Army Corps of Engineers, construction in Guadalupe Canyon is costing about $41 million per mile. Because the funding for this section of the border wall comes from federal money to fight drug smuggling, it wasn’t affected by the 9th Circuit Court of Appeals’ October ruling, which found that President Trump’s use of military construction funds to build the wall was illegal.

Even the construction preparations are permanently marring the landscape: Blading the ground to flatten staging areas and access roads, drilling wells to pump groundwater for concrete, and even dynamiting mountainsides will harm hundreds of wildlife and plant species. The Sky Island Alliance has done restoration work in Arizona’s mountains and canyons in the past, but Misztal worries that the the border wall’s impacts will be impossible to undo.

“The wall can be taken down, which restores connectivity, right? And certainly, restoration can be undertaken,” Misztal said. “But if you see those videos, you’ve seen how they’re actually blowing up rockface and the side of the mountains. And that’s not something that we’re going to be able to bring back. It’s really devastating.”

Arizona National Guard fills sandbags to help prevent floods What will Arizona do as its share of Colorado River water diminishes? “Not here for some agrarian fantasy”
By posting comments, you agree to our
AZPM encourages comments, but comments that contain profanity, unrelated information, threats, libel, defamatory statements, obscenities, pornography or that violate the law are not allowed. Comments that promote commercial products or services are not allowed. Comments in violation of this policy will be removed. Continued posting of comments that violate this policy will result in the commenter being banned from the site.