Correcting the mistakes of the past is tougher than it sounds, as managers work to get ahead of coming wildfires and learn from previous ones. by Ron Dungan, KJZZ Tweet 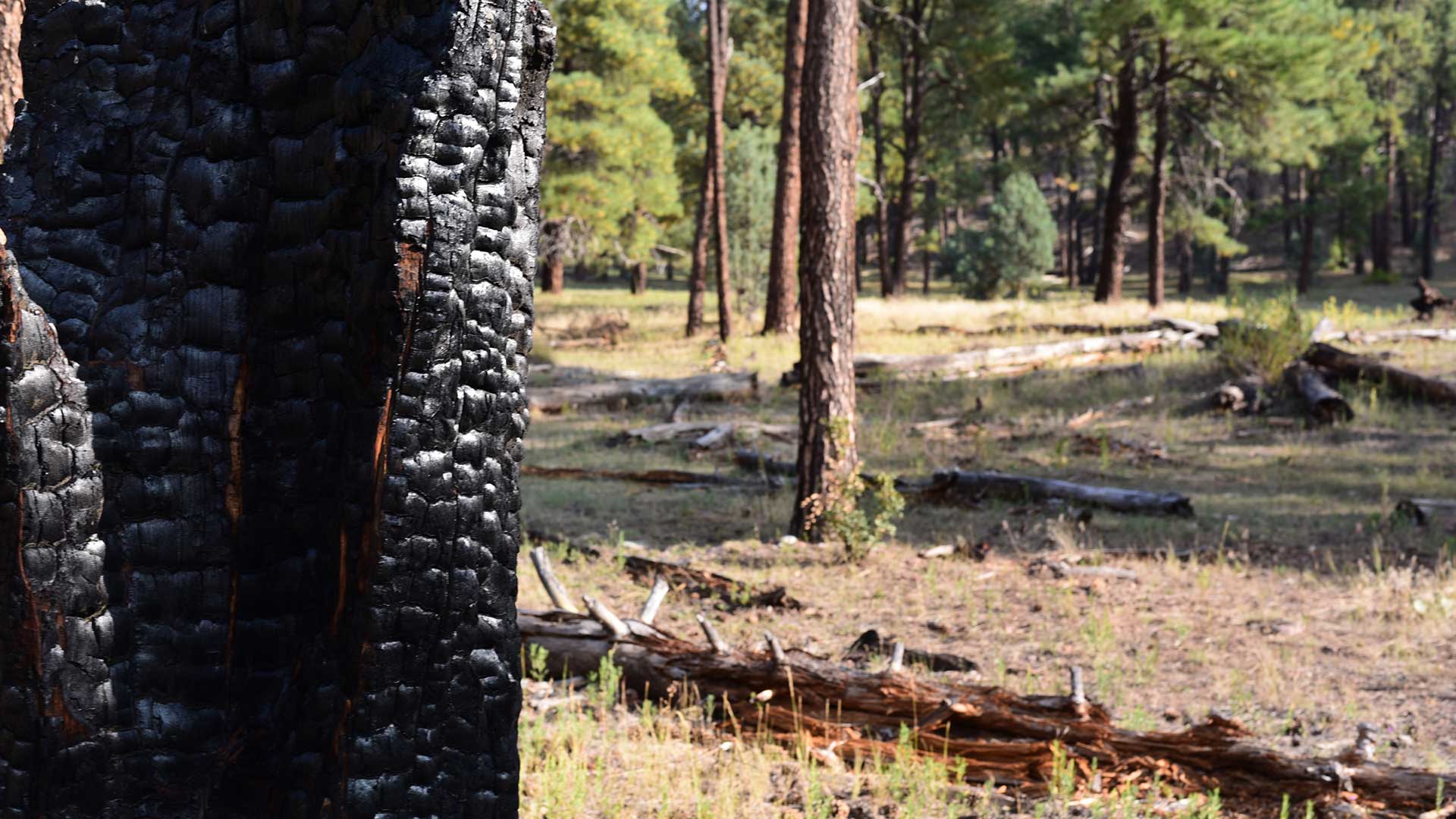 In June of 2002, nearly half a million acres burned in the Arizona high country. At the time, the Rodeo-Chediski Fire was the largest wildfire in the state’s history. There was too much fuel in the forest, a buildup that began more than a century ago. Enough people saw the record-breaking fire and agreed that something needed to be done to prevent the next big fire.

But correcting mistakes of the past is often tougher than it sounds. Almost two decades later, those involved in responding to the Rodeo-Chediski say they’re still learning what it will take to get ahead of wildfires, and the effects they have on headwater forests.

“I think the first thing to recognize is that the Southwest and California are built to burn,” said fire historian Stephen Pyne, author of “Fire in America.”

“We get lots of dry lightning,” Pyne said. “We’re the epicenter for lightning-caused fires in the United States.”

Without fire to burn off the excess, the forest filled with all sizes of fuel. By the time foresters figured out the problem, big, unruly fires were on the way. 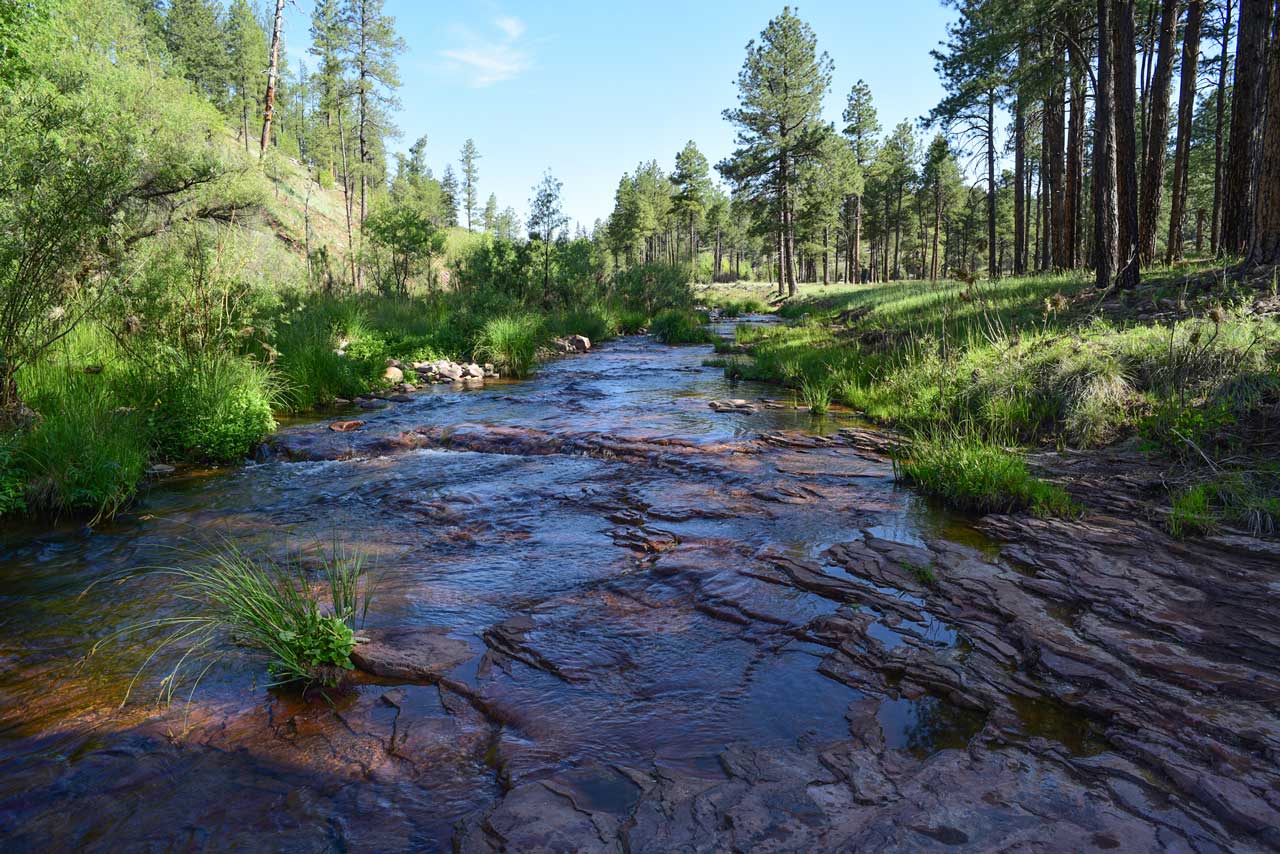 Canyon Creek, a tributary of the Salt River, burned in the Rodeo-Chediski Fire, but it has recovered in almost two decades since the fire.
Ron Dungan/KJZZ

Burn scars can send excess ash, sediment and toxic compounds into water supplies for municipal and agricultural users for miles downstream. They can also reshape flood zones and increase risks of mudslides.

The project’s Elvy Barton said the problems are the same throughout the West.

“What we’re learning here, and what we’re applying here in Arizona, can really apply to all of the western United States and especially the Colorado River watershed,” Barton said.

“We all face very similar problems, related to wildfires and watersheds. We all have overgrown forests, we have endangered species, we have large catastrophic wildfires that are coming through and just devastating these landscapes and having these horrible impacts on communities and the water supply,” she said. 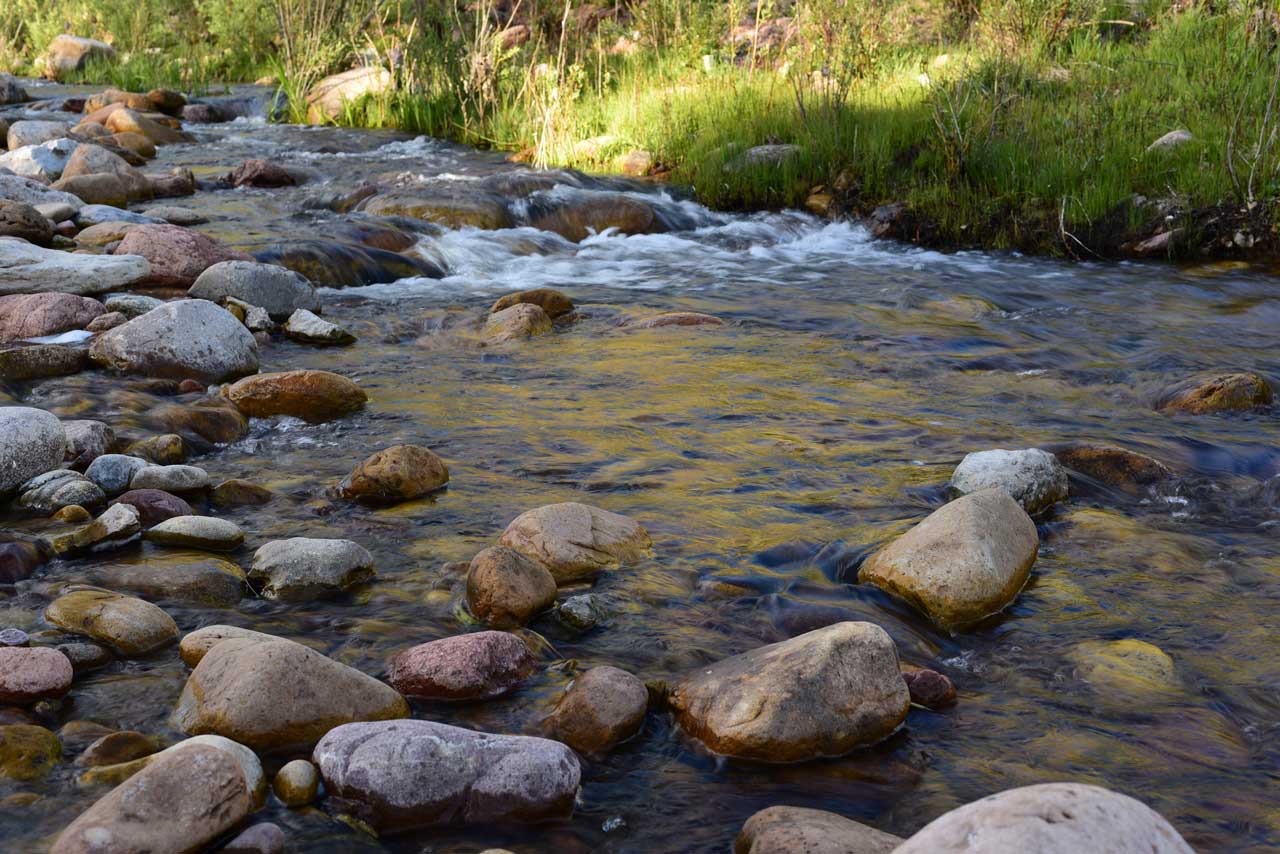 Canyon Creek, which burned in the Rodeo-Chediski fire, has recovered.
Ron Dungan/KJZZ

Ethan Aumack, executive director of Grand Canyon Trust, remembers the 10,000-acre thinning projects in the 1990s. They were ambitious for their time, but then Rodeo-Chediski came.

“Largely as a function of the Rodeo-Chediski Fire in 2002 we realized that we were not working at the scale at which wildfire was working,” Aumack said.

To begin to work at that scale, ranchers, conservationists, politicians, foresters and local communities put aside their differences and came up with a plan, the Four Forests Restoration Initiative (4FRI), officially launched in 2009. The Grand Canyon Trust is a part of the initiative.

The project’s ambitious goal was to thin about 2.4 million acres across Arizona, from the Grand Canyon to the border with New Mexico.

“The Four Forests Initiative was a major event. It was the flagship for a national program,” Pyne said.

There are two ways to thin the forest: Cutting and burning. 4FRI did both. The target for cutting is small diameter trees. That’s different from traditional logging, which takes the big, fire resistant trees.

Although 4FRI seemed to address the problem on paper, companies hired to thin the forest – mostly startups without a track record– failed to deliver. The forests kept growing.

“The problem is not getting smaller, the problem is only getting larger in Arizona. The same can be said across the West,” Aumack said.

In 2011, the Wallow Fire scorched another half a million acres in eastern Arizona. Two years later, 19 firefighters died in the Yarnell Hill Fire, northwest of Phoenix. That fire pointed to the growing problem of more homes in rural, fire-prone communities.

The goals of 4FRI were not being met in large part because it was difficult to make cutting small-diameter trees into a profitable business.

“It stumbled,” Pyne said. “It’s had several stutter steps and it’s had problems, and I don’t think it has been able to get the acres treated that we thought.”

One of the problems is that the Forest Service is stuck in an old business model, and keeps insisting that companies make a profit from timber, said Kieran Suckling, executive director of the Center for Biological Diversity, another 4FRI partner. Cutting small-diameter timber rarely makes economic sense, and efforts to make it profitable have failed.

“So the problem isn’t the companies being able to do it. The problem is asking them to do it in the first place. Why would you ask the impossible of them?” Suckling said. 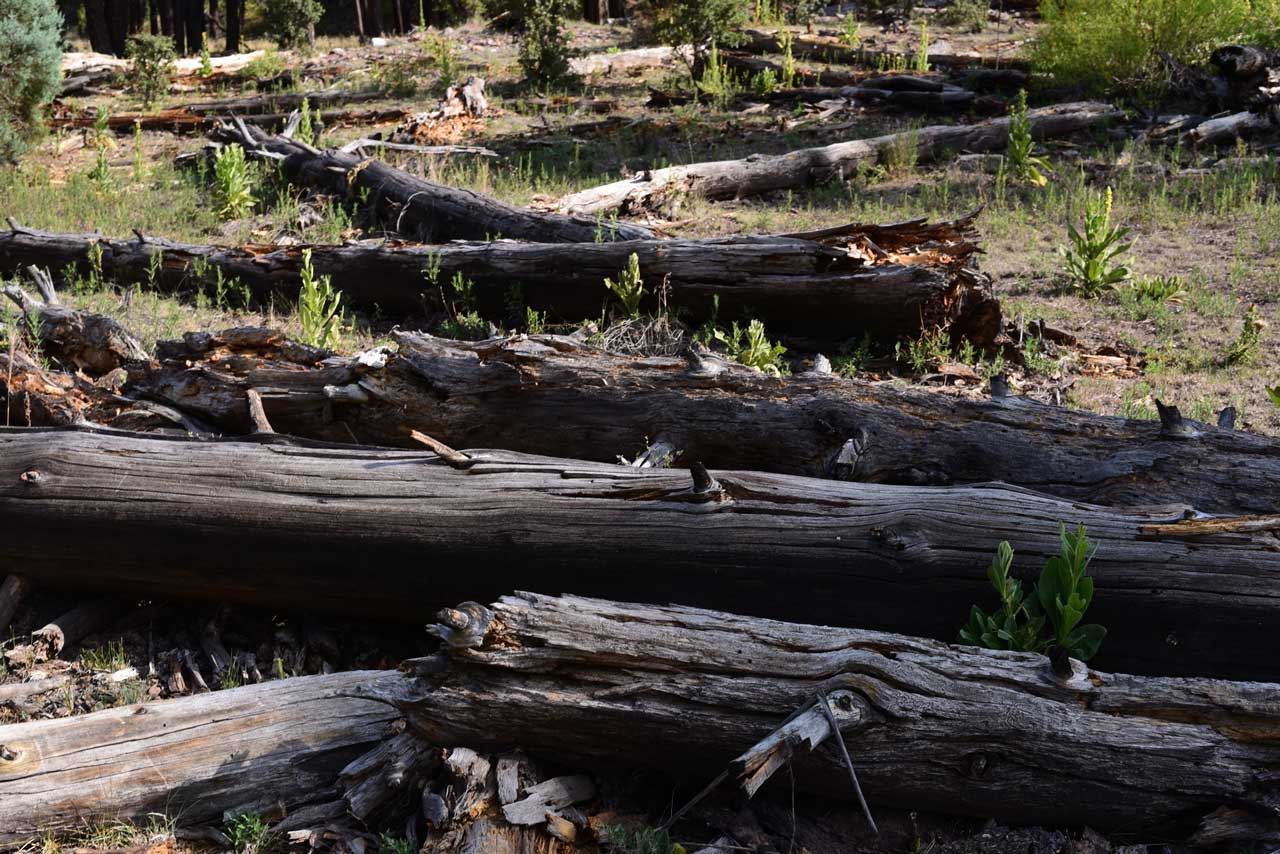 Although you can still see impacts of the Rodeo-Chediski Fire today, the area has recovered over the course of nearly two decades.
Ron Dungan/KJZZ

Climate change, ongoing drought and a growing urban interface have added to the complexity of the problem. Different ecosystems have different fire regimes, and unprecedented hot and dry weather conditions, invasive plants and other factors can cause fires today to jump from one ecosystem to the next, from low-lying Sonoran Desert expanses to shrubland chaparral to ponderosa pine. Fire was historically rare in the Sonoran Desert, but invasive grasses have made the desert more combustible. Sometimes all firefighters can do is get out of the way.

Pyne, who spent several seasons as a Grand Canyon firefighter, said agencies tasked with controlling fires are adapting a box and burn strategy with some fires, securing lines and allowing them to burn.

“I’m seeing a lot of, from fire officers on the ground, that we’re not going to get ahead of this in that way,” Pyne said. “We’re riding the tiger. There are too many things coming at us too fast, changing things too rapidly. We’re having to work with what we’re given. And they’re doing some remarkable stuff.”

Using fire to thin the forest is complicated, but unlike the timber-thinning projects, 4FRI is meeting its targets for burning. And not all wildfires are catastrophic, depending on their size and severity. Some places that burn recover, like the drainage of Canyon Creek in Tonto National Forest, which burned in Rodeo-Chediski.

4FRI has also done work on springs and watershed restoration. The Forest Service hopes to ramp up thinning again in the near future. Aumack wonders if we have enough time.

“On the other hand, I actually feel very optimistic, and sometimes foolishly so, that we can solve this problem,” Aumack said, “and I really think the question is can we do it in time?”

Charlie Ester, of the Salt River Project, said he thinks 4FRI can work if it moves forward, one step at a time.

“Is it going to be difficult to get there? It's going to be almost insurmountably difficult there,” Ester said. He added that the forest management conundrum facing fire officials across the West is like being tasked with eating an elephant. The correct, but painstaking approach is one bite at a time.

“The only way we’re going to get there is by incrementally increasing our capacity to harvest trees to process trees into a viable product so that it pays for itself, and just to move forward, one step at a time. And I think we’re doing that” he said.

Ester acknowledged that the effort has been fraught with setbacks, but the partners are not ready to give up.

“We all have to work together, we all have this common goal. And I’m very positive about the future of our forest ecosystem,” he said. 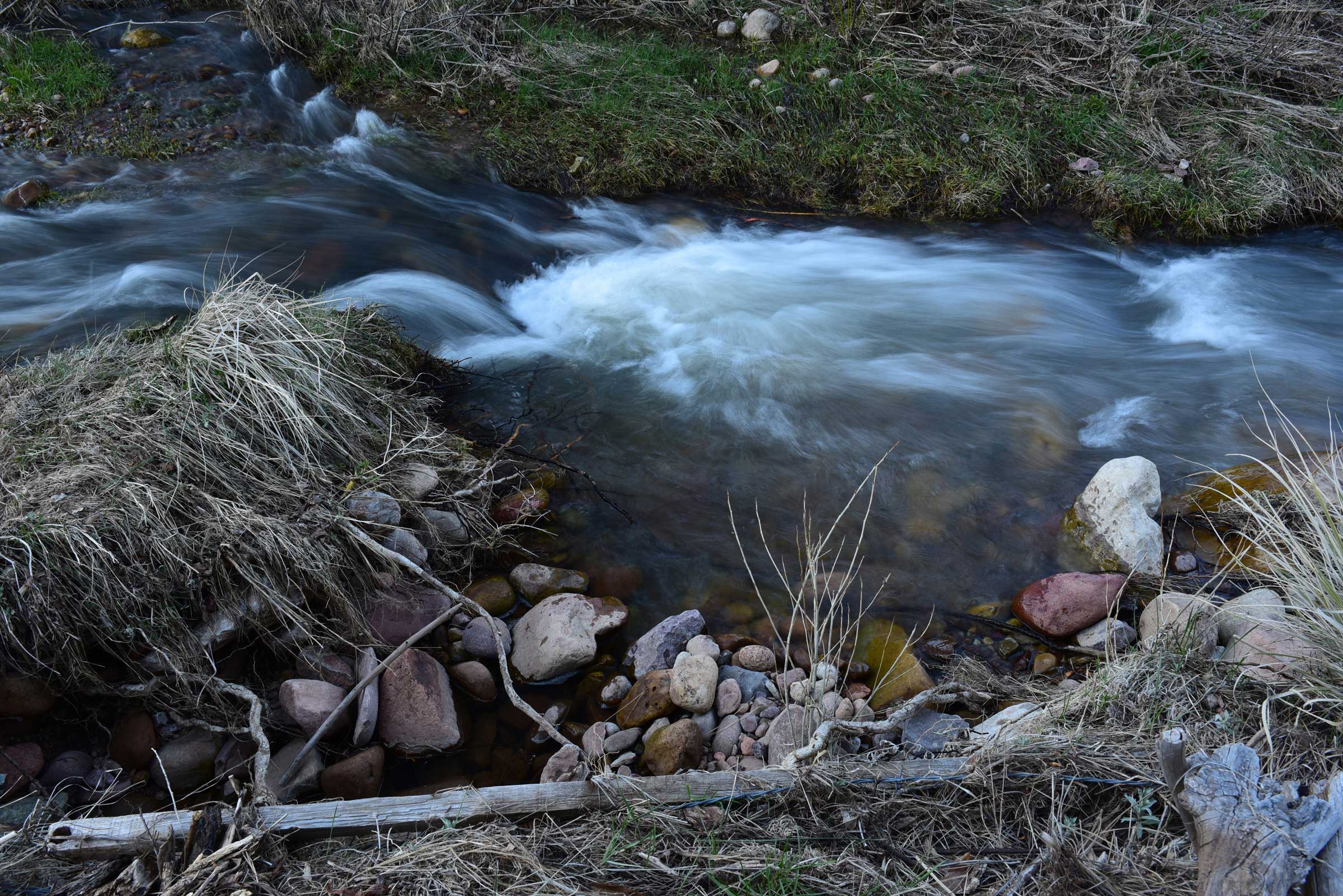 Canyon Creek, part of the Rodeo-Chediski Fire burn area, has recovered in the last couple of decades.
Ron Dungan/KJZZ

Almost 20 years later, scars from Rodeo-Chediski are still present on the landscape at Canyon Creek. But there are trees standing, and clear water. Trout swim in the stream, and elk and coyotes roam the hills. Eagles and herons circle overhead.

The West’s forests will continue to burn. That’s what forests have always done and what they will keep doing. The only question is how hot the fires will burn and how much ground they will consume.

Federal firefighters see bump in minimum hourly pay Arizona farmers prepare for water cuts Statewide emergency rental assistance lags while Pima County outperforms most of the country
By posting comments, you agree to our
AZPM encourages comments, but comments that contain profanity, unrelated information, threats, libel, defamatory statements, obscenities, pornography or that violate the law are not allowed. Comments that promote commercial products or services are not allowed. Comments in violation of this policy will be removed. Continued posting of comments that violate this policy will result in the commenter being banned from the site.