She's been living the life of a comic for over twenty years, and she has the stories to prove it! Kathleen Madigan performs in Tucson on February 17th. by Mark McLemore Tweet 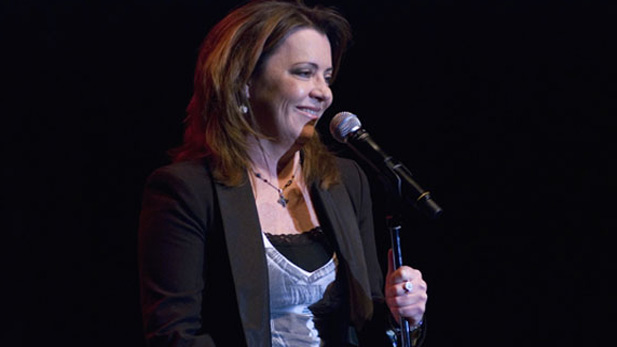 Kathleen Madigan captured in her natural setting, standing in front of both a microphone and a laughing crowd.

Over the course of her more than two decades in comedy, Kathleen Madigan has told jokes to virtually every conceivable type of audience, in practically every possible venue that exists for a stand-up comic.

She tours year round, does a steady stream of TV and radio appearances, but still proudly admits to sleeping past 11 o'clock on most days, as well as playing lots of golf.

I started our conversation by asking her about a recent allegation made by a talent scout for David Letterman that his late night talk show had a prejudice against booking female comedians...

Kathleen Madigan will be in Tucson on Friday, February 17th at the Rialto Theatre.

Steven Wright Takes Comedy Seriously Dave Barry Sandra Bernhard: Loud and Proud
By posting comments, you agree to our
AZPM encourages comments, but comments that contain profanity, unrelated information, threats, libel, defamatory statements, obscenities, pornography or that violate the law are not allowed. Comments that promote commercial products or services are not allowed. Comments in violation of this policy will be removed. Continued posting of comments that violate this policy will result in the commenter being banned from the site.