The state’s youth case rate was the third-highest among 48 states reporting, according to a report. by Katherine Sypher, Cronkite News Tweet 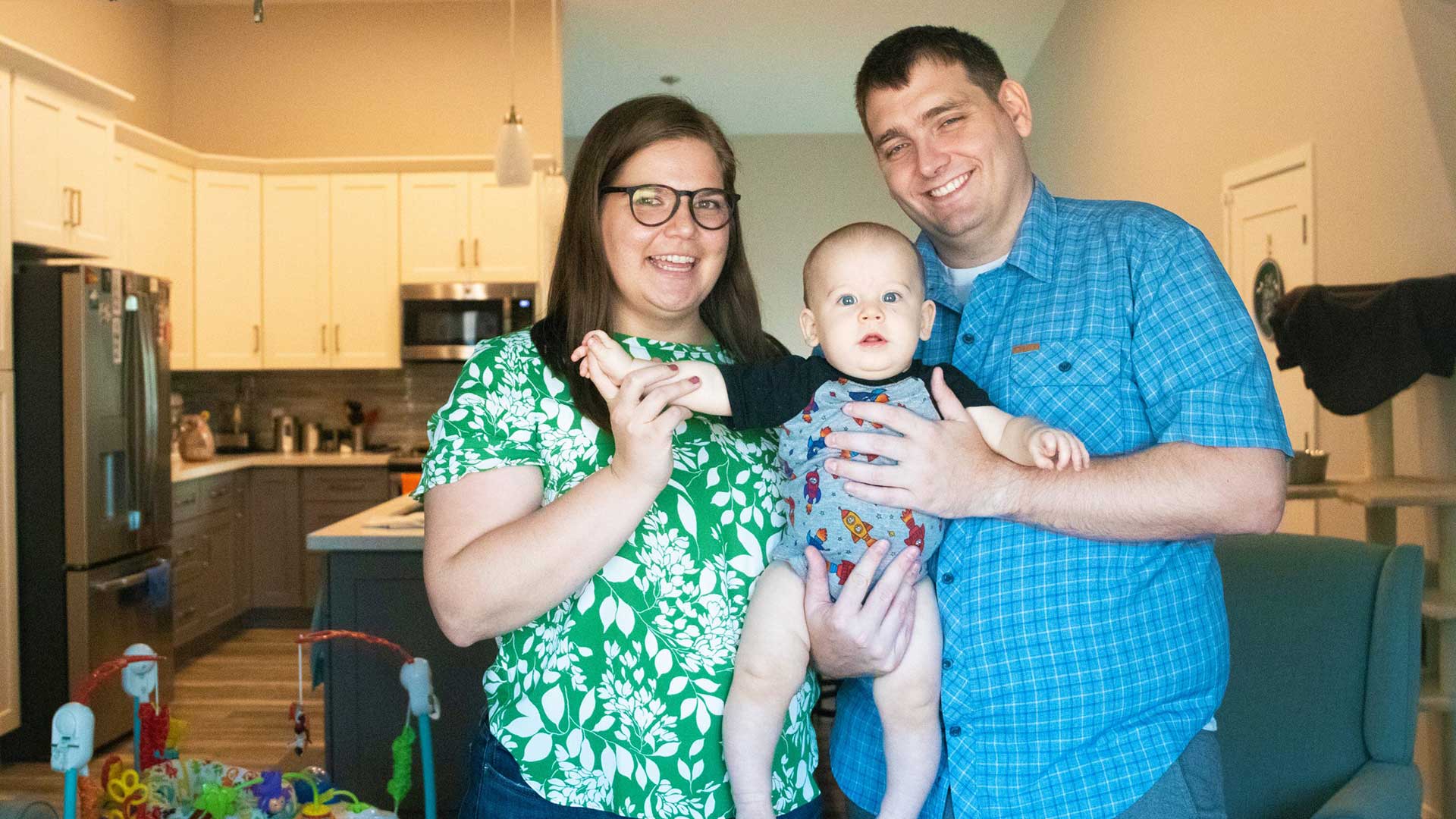 The McLean family, photographed through a window, spends the afternoon together in their Phoenix home earlier this month. After mom Katie and dad Reese tested positive for COVID-19, they took baby Jay for a swab test. It was negative, but they’re convinced he had the disease.
Megan Marples/Cronkite News

PHOENIX – Arizona has one of the highest rates of COVID-19 in young people in the nation — driven in part, experts say, by a large population of children of color, who are more likely to have underlying health conditions that make them susceptible to the disease.

As of Sept. 10, youth made up 10% of cumulative COVID-19 cases in the U.S. but 12.7% of Arizona cases, according to the most recent report by the American Academy of Pediatrics and the Children’s Hospital Association.

The state’s rate of 1,426.5 cases per 100,000 youth was the third-highest among 48 states reporting, behind Tennessee and South Carolina.

“Arizona has been hit particularly hard for adults,” said Joe Gerald, an associate professor at the University of Arizona’s College of Public Health who creates COVID-19 forecast models. “It’s not surprising that children have also been hit hard.”

Across the U.S., the number of cases among young people has passed 500,000. More than 26,000 of those are in Arizona, where the rate of novel coronavirus transmission has been decreasing among adults but increasing in adolescents and young adults – potentially because students have returned to college campuses, according to Gerald’s analysis.

States report COVID-19 cases in young people differently. Arizona and 27 other states use an age bracket of 19 and younger. Others use 18 and younger, and a few use either 0-14 or 0-20 years old.

In a recent blog post about youth cases, Cara Christ, director of the state Department of Health Services, said 30% of Arizona’s youth cases were in those 18-19 years old and that, overall, about 1.5% of Arizonans younger than 20 have been reported with COVID-19.

Katie Gipson-McLean is certain her 8-month-old son, Jay, is among those who’ve had the virus, even though he tested negative.

She lives with her husband, Reese, and son in Phoenix and works as a public defender for Maricopa County. She suspects she brought the virus home after visiting clients in jail.

On a Friday a few weeks ago, Jay had a fever of 103. Although he showed no other symptoms, Jay’s fever wouldn’t go away, so after a few days, Gipson-McLean and her husband took him to the pediatrician.

“The doctor ruled out an ear infection or UTI and all this stuff, so she said, ‘Well, it just seems like an unexplained virus,’” Gipson-McLean recalled. “The doctor suggested it might be good to get him tested (for COVID-19). At first we were like, ‘Well, where do we take a baby to get tested?’”

After both parents tested positive, they called numerous sites, including Phoenix Children’s Hospital and a CVS location, about having their infant checked. A swab test eventually was done at Banner Health’s testing site at the Arizona State Fairgrounds, and it came back negative, but his mother is convinced the test wasn’t done properly.

“It just seems like it’s a very strange coincidence that he would be negative and we would be positive, and then he had all the symptoms before we did,” Gipson-McLean said.

Pediatricians and public health experts believe a couple of factors may be contributing to the cases among young Arizonans.

Gerald noted that COVID-19 cases in the state are high to begin with.

“If you look at our per capita infection rate, really only two states stand out as being hit worse than Arizona, that was New York and New Jersey,” he said.

That higher infection rate, combined with the state’s relatively young population, means more young people are getting the virus, Gerald said. About a quarter of Arizonans are 19 or younger.

Another factor, he said, is that most Arizonans 19 or younger – about 59% – are children of color, specifically Hispanic children.

And this week, a CDC report found that 78% of individuals younger than 21 who have died from COVID-19 were Hispanic, Black and Native American.

Research shows that children of color are more likely to have additional health problems that put them at risk for the virus, like obesity.

“Obesity was definitely one of the biggest risk factors that we saw predicting who is going to be symptomatic and was going to need hospitalization to manage their infection,” said Dr. Wassim Ballan, a pediatrician at Phoenix Children’s Hospital.

Although racial and ethnic disparities in child cases of COVID-19 are known to exist, only two states – California and Illinois – report data that breaks down youth case counts by race and ethnicity.

The Arizona Department of Health Services does not provide that kind of data on its online dashboard, and when asked about those numbers, an agency spokeswoman said data in any format beyond what’s online is not available.

In her blog post, Christ said higher rates of testing might also be playing a role in Arizona’s youth numbers, and noted that about 12% of all people tested in the state have been under age 20.

Nevertheless, 16.6% of youth tested for COVID have been positive in Arizona. And that positivity rate is far higher than several other states that also are testing higher rates of children, according to the American Academy of Pediatrics report.

When children and adolescents do get the virus, they are less likely to get sick than adults. Rarely, kids may develop multisystem inflammatory syndrome, or MIS-C, a severe condition found in some children diagnosed with COVID-19 that can cause fever, rash, shock, severe inflammation and organ damage.

But as many as 45% of children that have the virus may have no symptoms at all, according to the CDC.

Elizabeth Pathak, an epidemiologist in Maryland, runs the COVKID Project, which tracks and compiles state-level COVID-19 data in children.

In one sense, Pathak said, COVID-19 is “an equal opportunity virus” because anyone who is exposed can become infected, but the virus does not affect all people equally.

“Because of underlying structural inequalities in our society, which have to do with housing, transportation and the labor market and labor force occupations, some people are going to be at greater risk of being exposed to a virus like this than others,” she said.

Because not every state categorizes youth the same way or is fully reporting COVID cases among youth, understanding how many children have the disease and where they live is challenging. Despite the limitations, the American Academy of Pediatrics says its report is “the best publicly available data” on child COVID-19 cases in the U.S.

Gerald said he hopes COVID-19 will be like other viruses in children, meaning they get sick, recover and suffer no long-term consequences. But he’s not sure whether that will happen with this coronavirus.

“Given how new coronavirus is – and also the reports in adults of these really prolonged cases in which adults continue to struggle with symptoms and fatigue – I don’t think we can easily dismiss the fact, or possibility, that there could be some similar consequences in children,” he said. “We just don’t know enough yet, because this virus is still so new.” 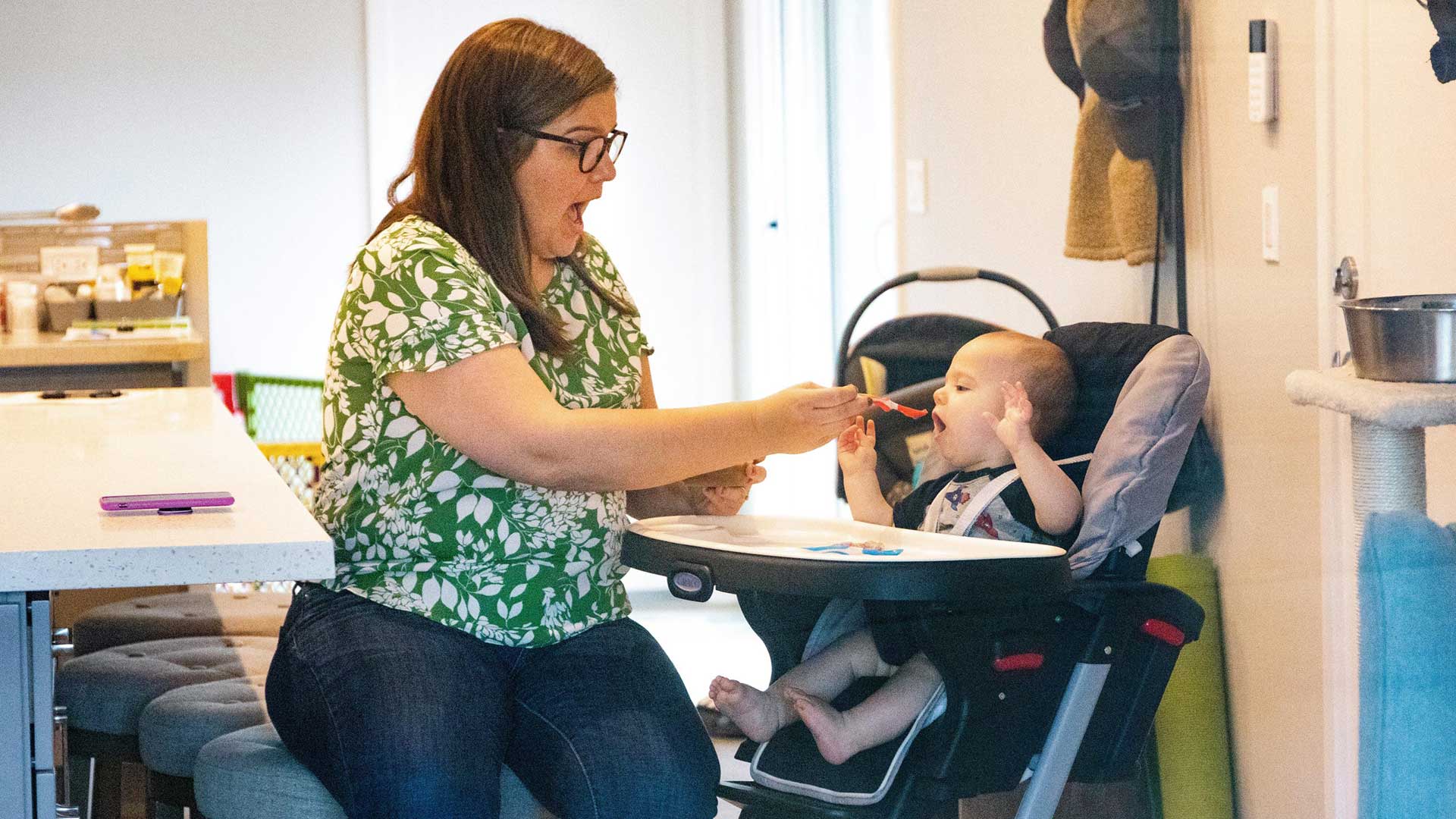 In this photo shot through a window of her home, Katie Gipson-McLean feeds 8-month-old Jay. She had a difficult time finding a place that would test her son for COVID-19 and, even then, she says, the practitioner was nervous about swabbing an infant so young.
Megan Marples/Cronkite News

Ballan said the best advice he can offer parents is: Keep children’s hands clean, get them a flu shot, and encourage masks and social distancing. He also recommends that parents know what to do if their child begins to show symptoms.

“Come up with a plan, make sure that your pediatrician will be able to refer you to a place where you can go and get tested,” he said. “Do this ahead of time, instead of having to deal with this on the spot.”

Baby Jay and his parents have just finished their two-week quarantine at home. Jay’s fever subsided, and Gipson-McLean has returned to work.

But her own struggles to even get her son tested were disheartening, she said.

“I’m sure it’d be discouraging for someone who doesn’t have the time or the resources or the wherewithal to be able to figure all that out.”

The swab test is one of the tests recommended by the CDC for diagnosing COVID-19 in children older than 1 month. But Gipson-McLean said the individual who administered Jay’s test seemed nervous to do so on a baby.

While Jay was squirming and crying, the tester swabbed only one of his nostrils, Gipson-McLean said, and not for the recommended 10 to 15 seconds. That’s why she thinks the result was a false negative.

“The only thing now is just the uncertainty about what antibodies do, how long they last, what reinfection would look like, or what the long-term consequences are, even if you didn’t experience symptoms, that sort of thing,” she said. “All the things that we haven’t had time to figure out yet.”

All counties can reopen, state says Education notebook: County case rates rise as hybrid learning begins, UA continues the fight against COVID-19 Treasury: Arizona risks relief funds over anti-mandate rules
By posting comments, you agree to our
AZPM encourages comments, but comments that contain profanity, unrelated information, threats, libel, defamatory statements, obscenities, pornography or that violate the law are not allowed. Comments that promote commercial products or services are not allowed. Comments in violation of this policy will be removed. Continued posting of comments that violate this policy will result in the commenter being banned from the site.