The county joins a growing movement of places adopting resolutions to counter policies that could be seen as infringing on gun rights. by Farah Eltohamy, Cronkite News TWEET SHARE 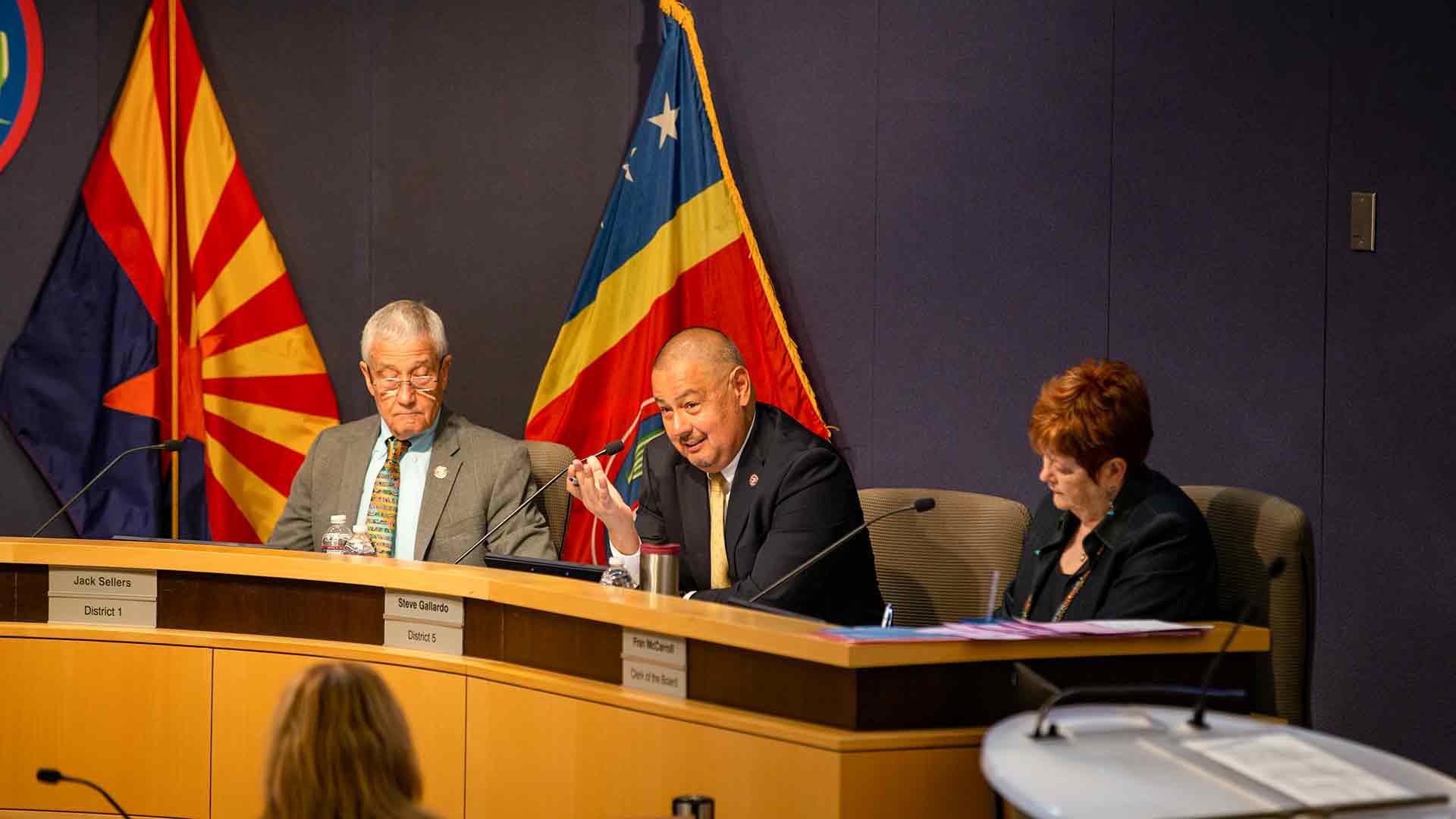 Raising concerns that the board rushed to a decision too quickly, Maricopa County Supervisor Steve Gallardo was the only member who voted against the “gun sanctuary” resolution.
Michael Hannan/Cronkite News

PHOENIX – The Maricopa County Board of Supervisors, in a tense public meeting Wednesday morning, voted 4-1 to declare Maricopa a “Second Amendment Preservation County.”

The resolution follows a growing movement of “Second Amendment sanctuaries” across the United States. Although there is no set definition of the term, it refers to states, counties and municipalities that adopt resolutions rejecting gun laws that infringe on the Second Amendment’s right to bear arms. How measures are enforced vary from place to place.

The terminology was coined after sanctuary cities, which try to protect undocumented communities by restricting the use of public resources to cooperate with federal immigration agencies.

Supervisor Steve Gallardo of District 5 emphatically disagreed with his four colleagues, who moved the resolution forward only on condition that the last paragraph be removed.

In the original draft of the resolution, the last paragraph stipulated county resources can’t be used to infringe Second Amendment rights. With the exclusion, the Maricopa County resolution became more of a symbolic decree for gun rights.

During the heated public meeting, Gallardo took a strong stance against the resolution – criticizing fellow supervisors for acting hastily on an issue where lives are at risk.

In his impassioned speech, he mentioned the 1997 shooting of Mary Rose Wilcox, a Maricopa County supervisor who, Gallardo said, was shot by an individual who “never went through a background check, never had a mental health evaluation but was in possession of a firearm.”

“How insensitive for us to adopt something like that, without even talking about the true cause of gun violence?” he asked.

Gallardo also said Maricopa County supervisors are great at putting their partisanship aside to get work done, and he never thought he would strongly oppose his peers on an issue until now.

“It’s not a county issue if someone’s rights have been violated,” Gallardo said. “As our attorney just stated, they have an avenue to the courts to deal with it, not for us.”

People from both sides of the aisle came to the meeting to express either their support or dissent. Opponents voiced concerns over the resolution’s failure to address protecting the public from gun violence.

One group in attendance was Moms Demand Action, a grassroots organization that advocates for gun reform across the nation. Volunteer Laura Hudson said although she’s glad the last paragraph was struck down, her main concern is the precedent it will set for future legislation for gun reform in Arizona.

“We are here because we feel like this amendment is unnecessary really doesn’t hold any legal matter,” she said. “But it sets a precedent, and leaves a door open for personal interpretation of the Constitution, and we’re concerned that it’s going to make our citizens less safe.” 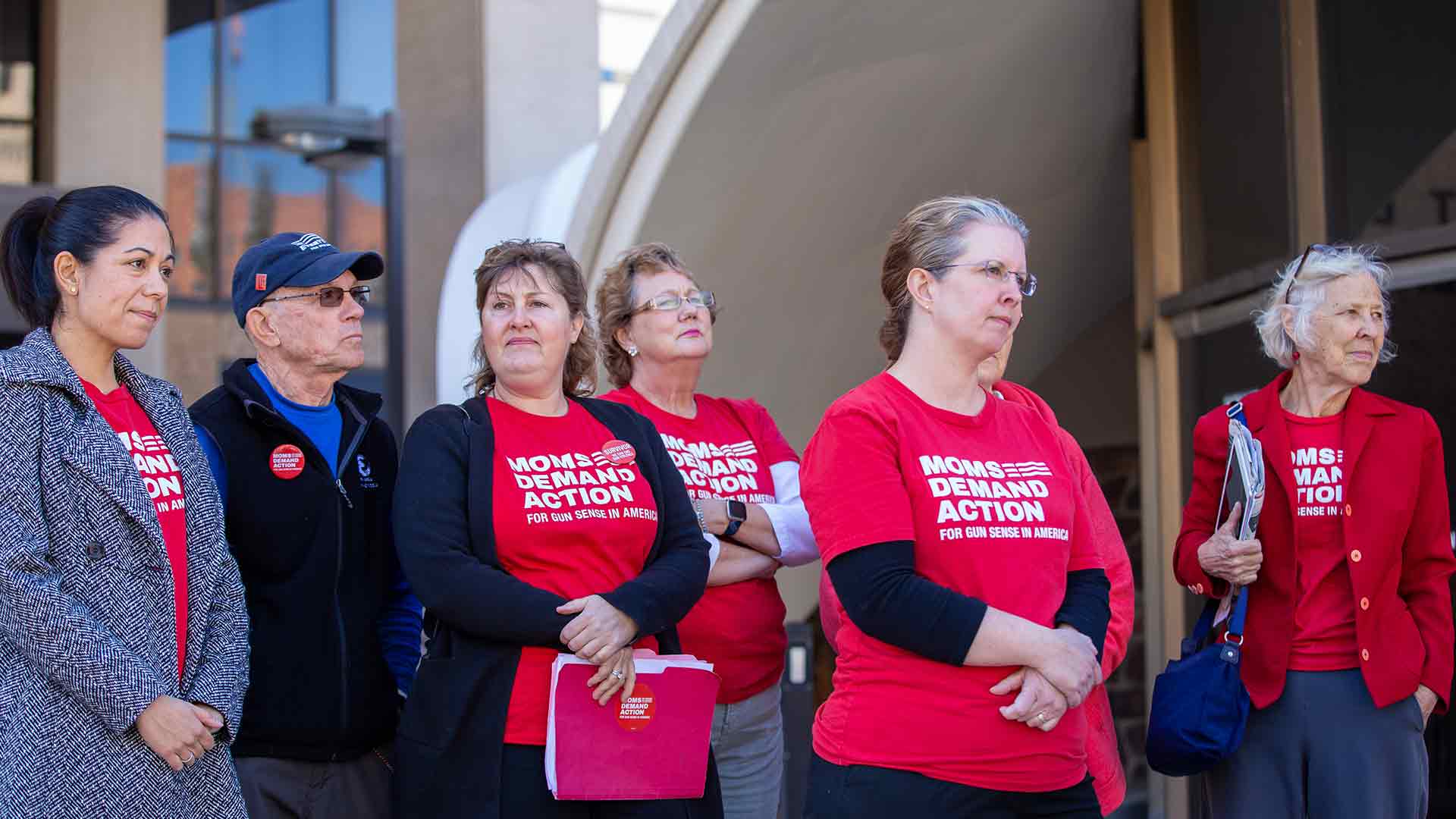 Members of Moms Demand Action attended Wednesday’s hearing of the Maricopa County Board of Supervisors. They are apprehensive about the resolution and what it could mean for legislation regarding gun-law reforms going forward.
Michael Hannan/Cronkite News

During public comments Phoenix attorney Garrick McFadden criticized board chairman Hickman for not consulting with minority communities before proposing the resolution.

“Did you reach out to any of the black members of your community that you represent?” he asked. “There’s 30 handgun deaths in America, each day. But 15 of those people are black people that are killed.”

McFadden said he hopes the supervisors reverse the resolution and that they listen to marginalized voices who are at the heart of gun violence.

Robert McWhirter, a candidate for Maricopa County attorney, told the board that the Second Amendment, like all rights, is subject to limitation. The resolution’s interpretation of the Constitution is dangerous, he said, because it ignores regulations on the Second Amendment that could protect people from gun violence.

“They decided to pass it beforehand to appease a certain political constituency that are very vocal but in the minority about guns in this society,” McWhirter said. “And as a candidate for Maricopa County attorney, the job is to make people safe from crime.”

County Sheriff Paul Penzone also criticized the decision. A few hours after the meeting, he issued a statement disavowing Second Amendment sanctuaries, saying they’ve become an excuse to circumvent the law and defy due process and democracy.

“The original resolution put forth at today’s Board of Supervisor meeting went beyond simply affirming the Second Amendment,” the statement read. “It was potentially in conflict with current law enforcement operations and our ability to keep the community safe from persons who seek to do harm. Unfortunately, no one sought law enforcement expertise or input from my office on the original resolution, which could have potentially prohibited law enforcement from intervening in harmful situations to save precious lives or put them at risk of costly litigation for following the laws of our land.”

On the other hand, Jerry Sheridan, former chief deputy under then-Sheriff Joe Arpaio, who has filed to run against Penzone for sheriff this November, publicly thanked the Board of Supervisors for protecting the right to carry. He said he comes from a background of law enforcement and “the need is absolutely there” for people to protect themselves in rural areas.

“As we all know, especially the rural county areas, there’s not always a deputy sheriff around the corner,” he said. “When you call 911, it may take a while for that to get there. That Second Amendment says, the right to carry and bear firearms shall not be infringed.”

Judge: Arizona Senate, Maricopa County need to settle fight over election data Electors, tribal leaders react to seizure of Capitol building Hospital Officials push for mask mandate, remote learning.
By posting comments, you agree to our
AZPM encourages comments, but comments that contain profanity, unrelated information, threats, libel, defamatory statements, obscenities, pornography or that violate the law are not allowed. Comments that promote commercial products or services are not allowed. Comments in violation of this policy will be removed. Continued posting of comments that violate this policy will result in the commenter being banned from the site.