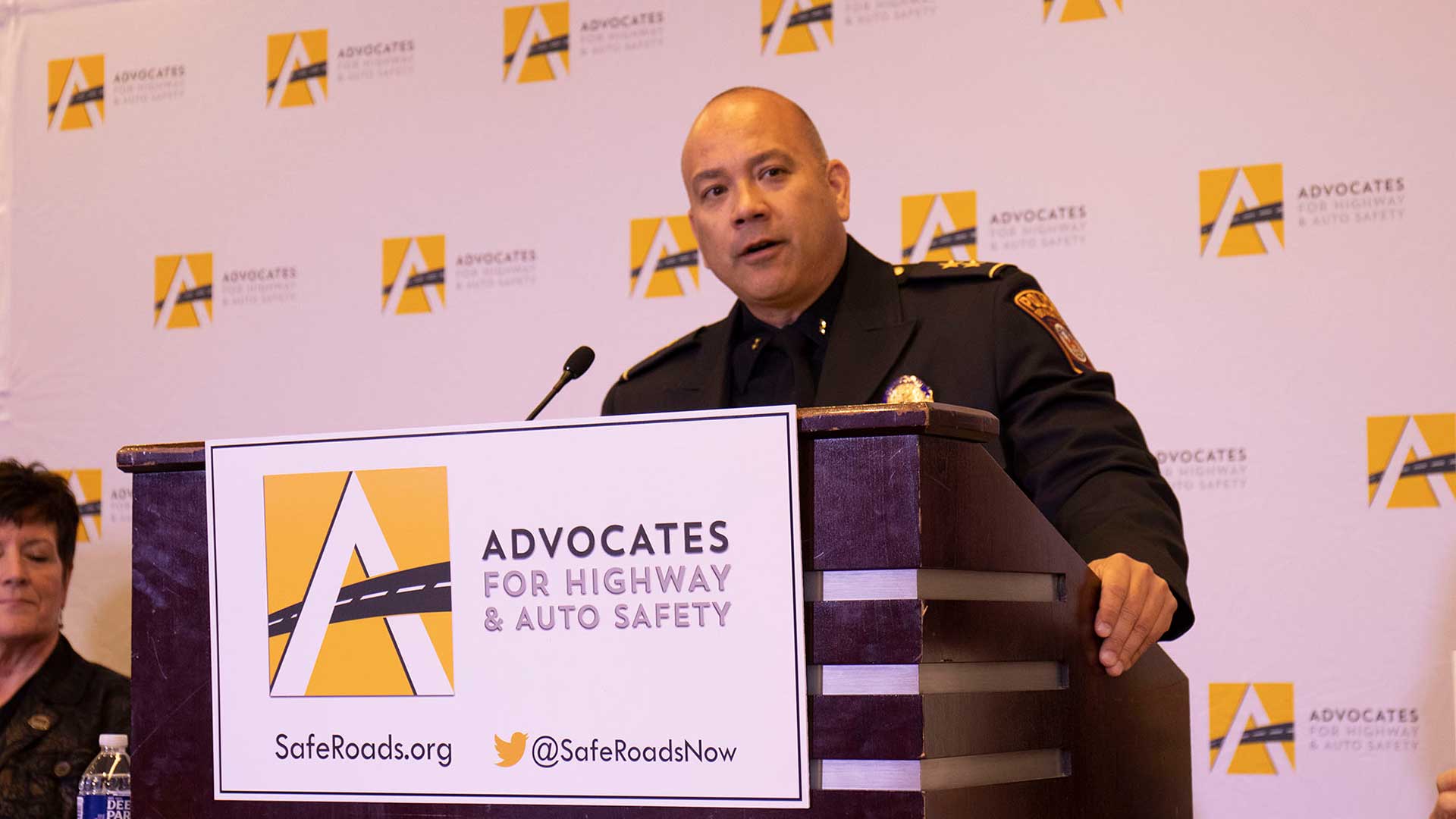 Oro Valley Police Cmdr. Chris Olson said Arizona’s recently enacted law banning texting behind the wheel is “a good start” toward safer driving in the state, as distracted driving is a problem that police see all too often.
Joshua Gerard Gargiulo/Cronkite News

WASHINGTON – Arizona enacted a ban on texting while driving last year, after 10 years of trying, but it still wasn’t enough to pull the state from the bottom of a national report card on traffic safety laws.

The annual Advocates for Highway and Auto Safety report said Arizona had just five of 16 recommended safety laws, ahead of just five states.

An official with the Governor’s Office of Highway Safety dismissed the report, which he said is habitually biased against Arizona and ignores the good things the state is doing to improve highway safety.

Oro Valley Police Cmdr. Chris Olson, on hand Thursday for the report’s release, said the new distracted-driving law “is a good start,” but more needs to be done.

“I think the Legislature did a really good thing here, with passing the distracted-driving law,” Olson said after the report’s release. “Distraction is a big problem. We are seeing a lot of that in Oro Valley and other places.”

The texting ban was one of the only bright spots for Arizona in the 2020 Roadmap of State Highway Safety Laws, the 17th annual report card by the highway safety group.

The report noted that Arizona also requires that teen drivers have a licensed adult in the car for at the first six months while they are on their learner’s permits. And the state had all three recommended impaired-driving laws: child endangerment and open container laws and a required ignition interlock system after a drunken driving conviction.

But it said Arizona had none of the other 11 recommended laws, including seat belt, booster seat and motorcycle helmet requirements, graduated drivers licenses for teens and a cell phone ban for teen drivers, among other laws.

Cathy Chase, the president of the Advocates for Highway and Auto Safety, said the annual report is intended to be a call to action to state lawmakers.

“The status quo is unacceptable,” said Chase, who said more than 100 people are killed and 7,500 injured in motor vehicle crashes each day in the U.S. “As state legislatures around the country convene, now is the time for attention, activism and action.”

“I pay attention to what is reported to us and what we do,” Gutier said.

He noted that while the state falls short in the report on seat-belt laws, state data show that 90% of drivers buckle up, Arizona produces more seatbelt citations than nine other states that have stricter laws, and Arizona police arrested more than 28,000 drunken drivers in 2019.

“What more can we do?” Gutier asked.

While the state’s distracted-driving law took effect last year, police can currently only issue warnings for people caught violating the law. Fines will not take effect until January 2021.

The law “prohibits all drivers from engaging in distracting activities including reading, writing and sending messages” with a handheld device while their car is moving. There are exceptions for calls to a doctor or to 911, and use of hands-free devices to make a call or sent a voice-generated text.

Jennifer Weaver, a panelist at Thursday’s report release, supports such laws: She was driving and texting in 2015 when she was involved in an accident that killed another driver.

“No one gets into their car thinking I am going to answer a call or read a text while driving and kill someone as a consequence,” she said in prepared remarks.

Olson said that while some see such laws as “government overreach,” it can be hard for drivers to resist the pull of their phones.

“People really rely on their phone for their day-to-day job: to check on their children, stuff like that, you know using their phones to get directions,” he said.

While states are making progress, new challenges continue to arise. Olson pointed to the increasing legalization of marijuana use: Even though driving while drugged falls into the same category as DUI in Arizona, he worries that people will be no more responsible than they were with their phones.

200K Arizona drivers getting refunds over public safety fee City of Tucson adds five new electric buses to fleet Pima Association of Governments starts month-long pedestrian and bicycle count
By posting comments, you agree to our
AZPM encourages comments, but comments that contain profanity, unrelated information, threats, libel, defamatory statements, obscenities, pornography or that violate the law are not allowed. Comments that promote commercial products or services are not allowed. Comments in violation of this policy will be removed. Continued posting of comments that violate this policy will result in the commenter being banned from the site.