US House OKs protections near Chaco park in New Mexico

The park is at the center of a debate over oil and gas development in an area dotted by historical sites. by Susan Montoya Bryan, Associated Press TWEET SHARE 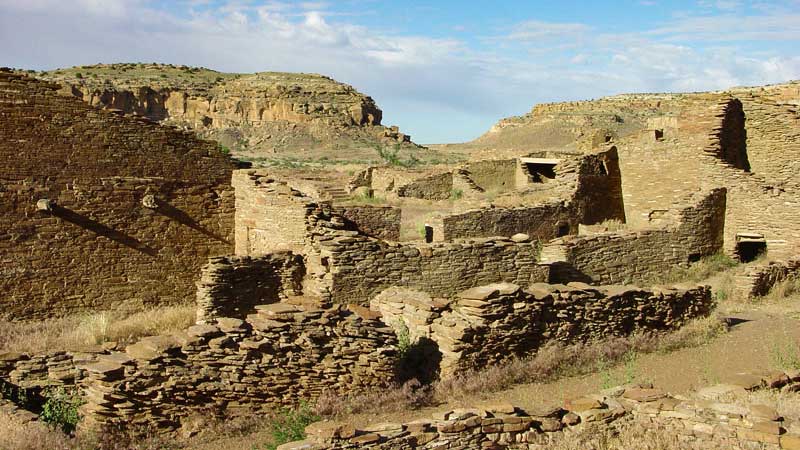 ALBUQUERQUE, N.M. — Walls of stacked stone jut up from the canyon floor, some perfectly aligned with the seasonal movements of the sun and moon. Circular ceremonial subterranean rooms called kivas cut into the desert, surrounded by the remnants of what historians say was once a hub of indigenous civilization.

Chaco Culture National Historical Park is at the center of a decades-long debate over how to manage oil and gas development in a sprawling area of northwestern New Mexico that is dotted by sites tied to the park but that lie outside its boundaries.

The U.S. House of Representatives on Wednesday approved legislation prohibiting drilling on the checkerboard of federal land that borders the park. The measure also calls for terminating existing non-producing leases in the area and suggests more studies and protective measures be taken to address health, safety and environmental effects on communities and tribal interests.

Federal land managers have been deferring interest by the oil and gas industry in parcels within a 10-mile radius of the park to address the concerns of environmentalists and Native American leaders. The legislation would codify that practice, essentially establishing a buffer around the park.

U.S. Rep. Ben Ray Lujan, a New Mexico Democrat, is among the sponsors. He remembers first visiting the park years ago when he was in his 20s.

"There's something incredible, magical, spiritual that you feel as you walk up to Chaco, touch those stones that have withstood the test of time and you think of all the people who came before us. It's emotional," Lujan said.

He said he is confident the legislation will have bipartisan support. He pointed to the willingness of Interior Secretary David Bernhardt to defer drilling leases around Chaco while regulators prepare a new management plan for the region's resources. Bernhardt's decision came earlier this year after touring the world heritage site and meeting with leaders from the Navajo Nation and New Mexico's pueblos.

Similar legislation to create a protective zone around Chaco is pending in the Senate.

The campaign to curb drilling in one of the nation's oldest basins has spanned at least three presidential administrations. In recent years, concerns expanded beyond environmental impacts to the preservation of cultural landmarks.

The oil and gas industry has been operating in the San Juan Basin for nearly a century. Industry representatives have said existing federal laws and policies require extensive environmental and cultural reviews before drilling can happen and that any sites designated as culturally significant as a result are respected.

Tribal leaders and environmentalists have praised the legislation, saying it would better protect irreplaceable sites beyond the park.

However, passage would not mean development comes to a halt. Most of the land within the protection zone belongs to the Navajo Nation and individual tribal members who would retain their sovereignty and property rights.

Still, many allotment owners are concerned their holdings will be landlocked if the federal parcels are off limits. That would mean millions of dollars in lost revenue for some families on Navajo Nation, which has struggled for years with high rates of poverty and unemployment.

Environmentalists, archaeologists and Pueblo leaders from elsewhere in New Mexico for years have called for a drilling moratorium. Pueblo leaders say their cultural ties to Chaco are still strong. Some also have concerns about pollution from increased drilling.

Some leaders met with Lujan last week while in Washington, including E. Paul Torres, chairman of the All Pueblo Council of Governors.

"We need the buffer zone for sure," Torres said. "The oil wells are getting dangerously close to Chaco right now and that's what we do not want to see."

Conservationists: Oil drilling plan doesn't do enough to protect Chaco Clean energy produced on Navajo land could help power Los Angeles Indigenous group reaffirms importance of Quitobaquito Springs amid border wall construction
By posting comments, you agree to our
AZPM encourages comments, but comments that contain profanity, unrelated information, threats, libel, defamatory statements, obscenities, pornography or that violate the law are not allowed. Comments that promote commercial products or services are not allowed. Comments in violation of this policy will be removed. Continued posting of comments that violate this policy will result in the commenter being banned from the site.