Tucson is getting electric buses, but more people are choosing to drive

The buses could reduce the city's greenhouse gas emissions, but ridership is at a 10-year low. by Jake Steinberg Tweet 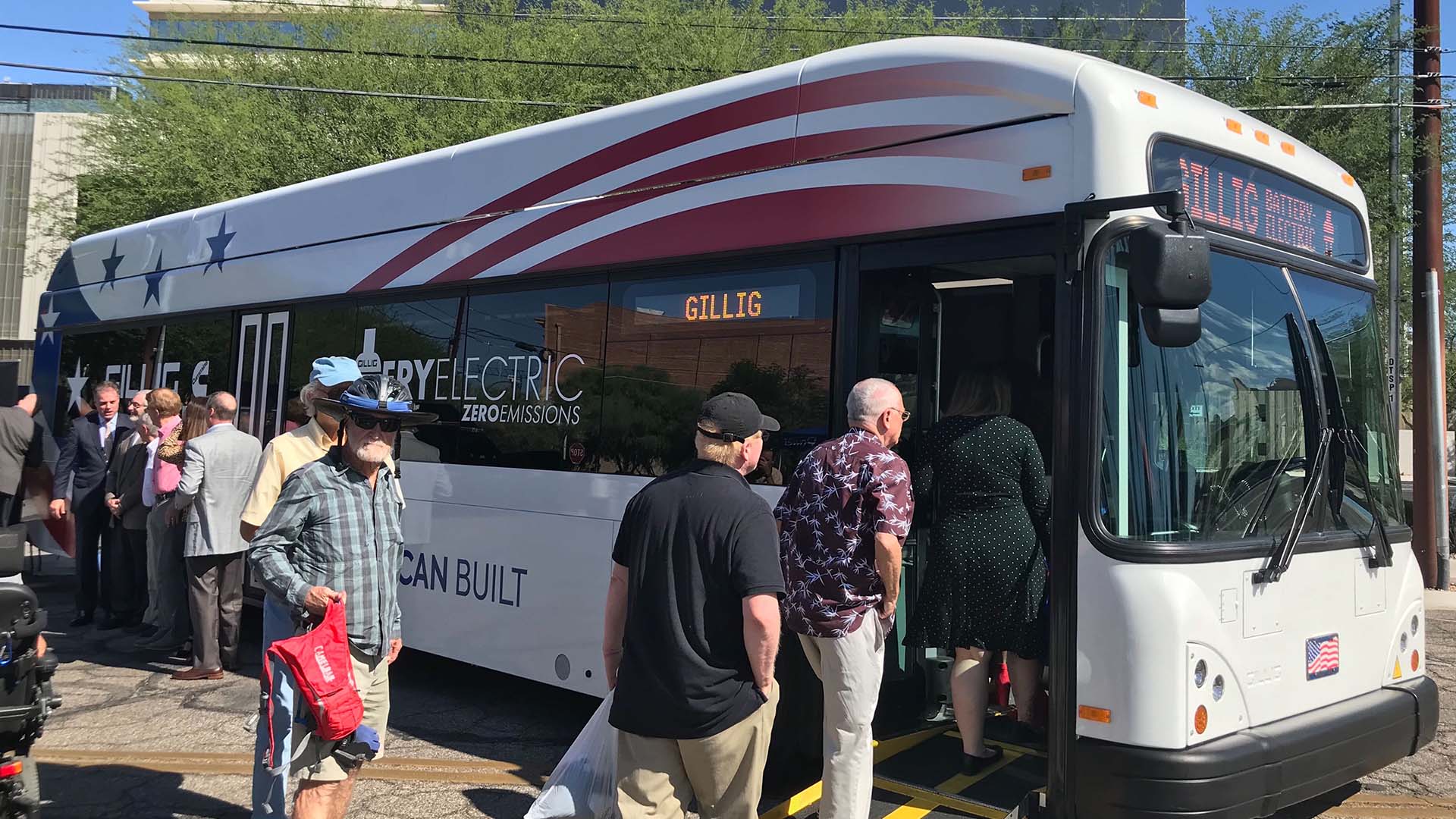 An electric bus being showcased in front of the Tucson Electric Power headquarters on Sept. 18, 2019. The city of Tucson plans to lease a bus from the California-based Gillig for a pilot program beginning next spring.
Jake Steinberg/AZPM

"We cannot reduce greenhouse gas emissions without electrifying transportation. And this bus is part of it," said City Council member Paul Durham at an event last week.

Attendees were offered the chance to ride an electric bus around the block.

Malcolm Oliphant said the experience didn't feel that different from a normal bus.

Paul Pederson said he loved how quiet the bus was. He doesn't usually ride the bus.

Many of the attendees at last Wednesday's electric bus event professed to not being regular transit riders. They aren’t alone. Sun Tran’s ridership is at a 10-year low, and it keeps declining.

With fewer people taking the bus, that means there are more cars on the road. David King, a professor of transportation planning at Arizona State University, said fewer riders and more drivers cancels out the benefit of going electric.

"A full bus that’s running on diesel is better than an empty bus on electricity," he said.

About a third of Tucson’s greenhouse gas emissions come from transportation. Most of that is coming from the tailpipes of personal vehicles, according to the Pima Association of Governments. All the city’s buses emit just 1% of the city’s transportation emissions.

Transit ridership is going down all over the country, not just in Tucson. A report released last year by the Congressional Research Service named a number of factors, including low gas prices, cheap car loans and the rise of Lyft and Uber.

King said that doesn’t mean the city is off the hook.

It’s not just a matter of putting more buses on the road. Things like bus pullouts and stops where riders can pay their fare before boarding make the system more reliable. King said if Tucson wants more people to use transit, it has to invest in transit infrastructure.

"It is a matter of money," he said. "[That] is certainly the case in Phoenix, where the voters approved some additional money specifically so that there would be service increases."

Phoenix's Valley Metro has also lost riders, but far fewer than other cities.

The next opportunity to increase funding for transit could come in 2026. That's when the Regional Transportation Authority's current plan and a half cent sales tax to fund it will expire. Funding from the that tax led to transit improvements like the Sun Link streetcar. The RTA plans to ask voters to renew the funding and add new projects.

The Pima Association of Governments is helping the city develop a plan to improve its transit service. The planning group has spent the past year surveying Tucsonans. James McGinnis, PAG's transit services manager, said he’s hopeful voters will support extending the RTA.

McGinnis says transit ridership is cyclical, and he sees people returning to the bus eventually. King, the transportation expert at ASU, said new technology can make a big difference when it comes to getting people to use transit.

"I suspect that electric buses, by being quieter, will actually help improve the perception of buses," he said.

Water managers see promise in recycling sewage The Buzz: A strong monsoon brings road closures and floods The Buzz: Dealing with Arizona's PFAS problem
By posting comments, you agree to our
AZPM encourages comments, but comments that contain profanity, unrelated information, threats, libel, defamatory statements, obscenities, pornography or that violate the law are not allowed. Comments that promote commercial products or services are not allowed. Comments in violation of this policy will be removed. Continued posting of comments that violate this policy will result in the commenter being banned from the site.