The plant collection is designed to expand public understanding of desert plants and where they originated. by Ariana Brocious Tweet 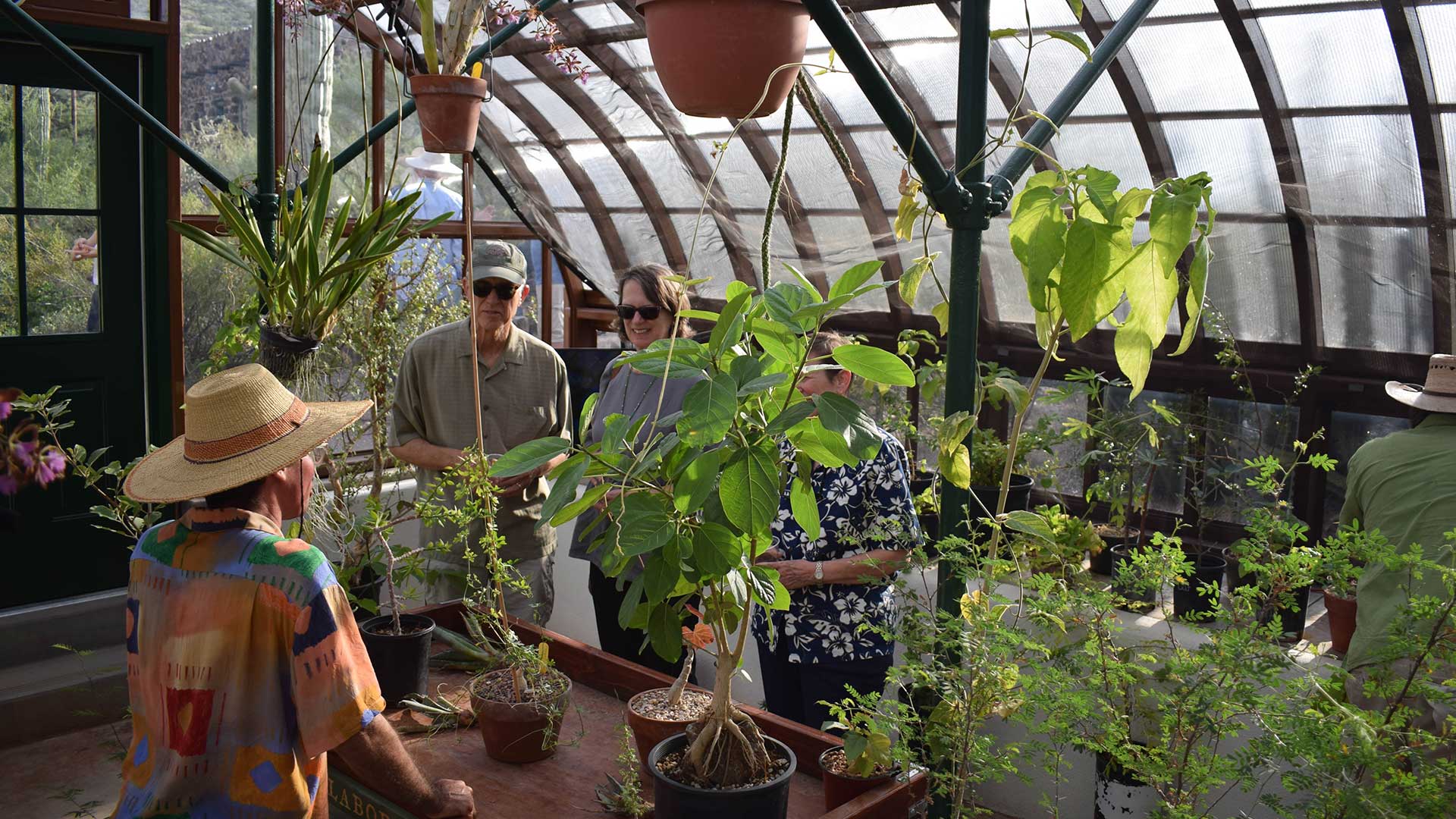 The thousands of Tucsonans who trek up Tumamoc Hill day in and day out may not know that they pass by a century-old research station essential to our understanding of plants.

Roughly a third of the way up Tumamoc Hill sit several low-slung stone buildings surrounded by native vegetation. This is the Desert Laboratory, established in 1903 by the Carnegie Institution to study and understand how plant life adapts to aridity.

Since its inception, the research site has made significant contributions to science, said Director Ben Wilder. Being a hill, Tumamoc offers multiple ecological zones for study and comparison.

"These are the longest continuously monitored vegetation plots in the world, actually," he said. "The discipline of ecology in North America was born here." 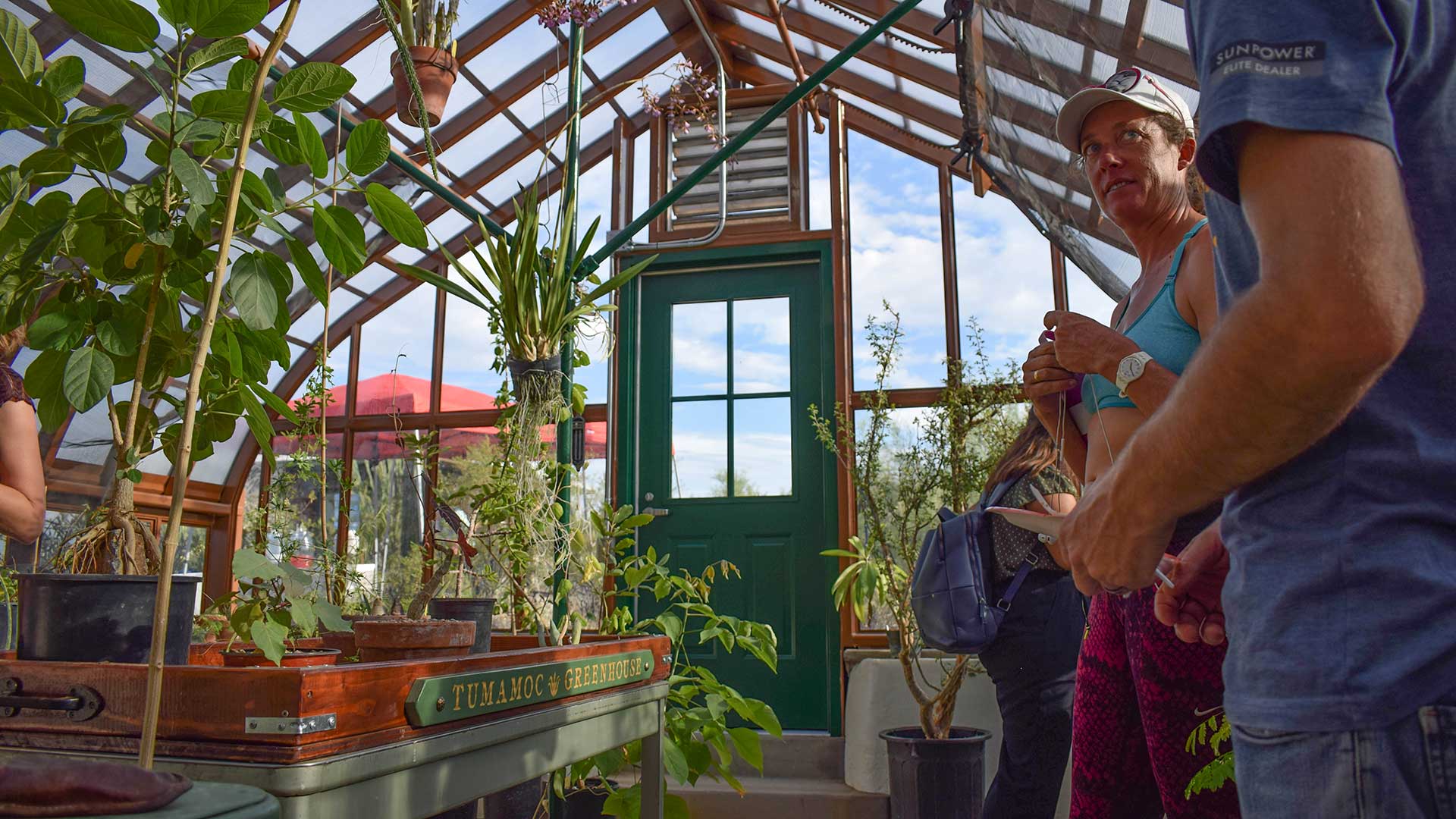 The original site included a Victorian-style greenhouse, which suffered through 100 years of wear and occasional repair. When Wilder joined the lab in 2016, the greenhouse was on the verge of being condemned. Instead, with help from the University of Arizona (which bought the Tumamoc property in 1956), the National Park Service and community members, they rebuilt it. The greenhouse officially reopened Sept. 6.

Like the rest of Tumamoc, the newly renovated greenhouse will offer space for plant research. But its primary goal is educational, Wilder said.

"It's a narrative greenhouse, so we're really trying to communicate and tell the story of the plants from this region and trying to expand people's understanding of what is a desert plant, where do desert plants come from," he said.

"The Sonoran desert is a drought-stricken, frost-bitten tropical deciduous forest. It has its origins in the tropics," said greenhouse curator Robert Villa. He described the Sonoran desert as "sort of like an evolutionary tide pool of tropical species at their northern limit," with relatives in more tropical latitudes further south.

"So that place where a jaguar can munch a desert tortoise, or an orchid can grow on a giant columnar cactus. It's this sort of wonderful smorgasbord of species," he said. The plants he selected for the greenhouse showcase those connections. 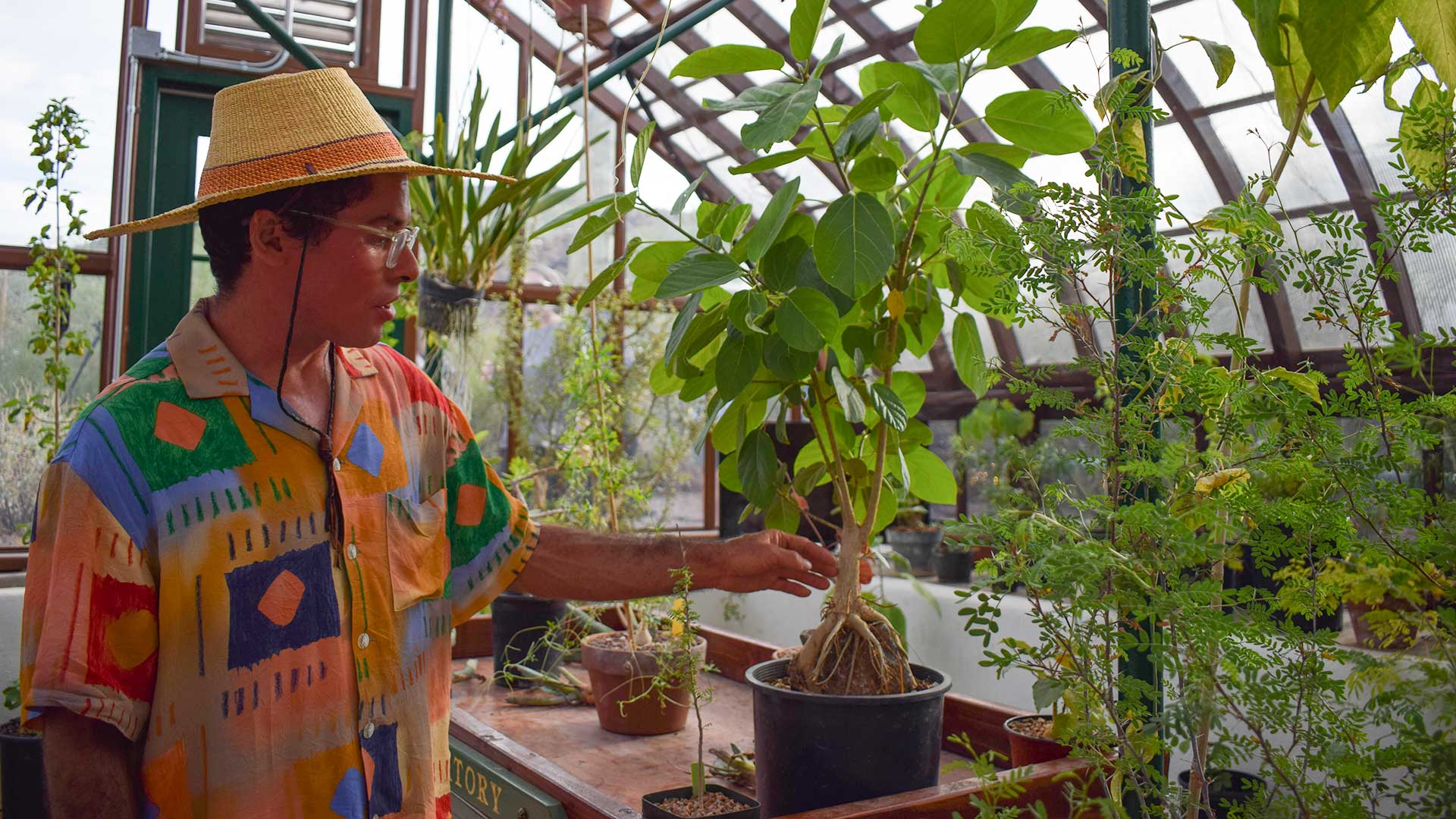 The greenhouse is small, light-filled and packed with unfamiliar plants, including papaya, orchid, and a wild cucumber. Many of the plants end their normal range near the border with Mexico.

At the greenhouse opening, Villa engaged in "plant talk" with visitors, describing the collected plants to novices and experts alike. At one point he showed off an acacia with thorns that have turned into little vessel-shapes. "Ants live in this plant and protect it," Villa said. 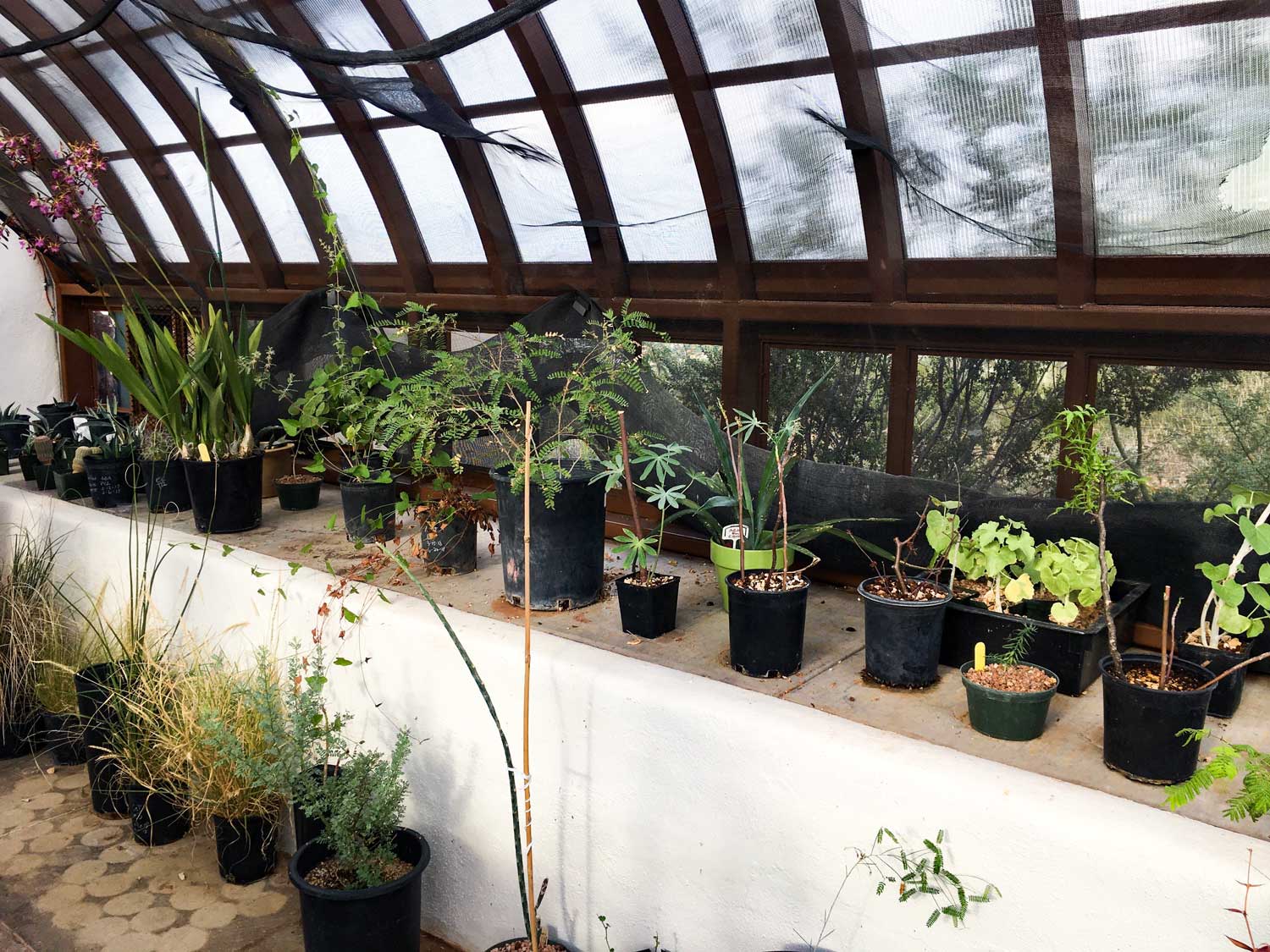 VIEW LARGER Plants line the inside of the greenhouse.
Ariana Brocious/AZPM

Desert plants have a lot to teach us, Wilder said.

"The desert is a land of extremes. And so plant and animal life is uniquely evolved to weather really rough periods of time."

Wilder said more research into those adaptations could help as climatic change brings even more extremes. That’s part of what makes the greenhouse exciting.

"The work that we're doing now and the questions of understanding how things are changing to aridity and extreme environments is as important today maybe as it was 115 years ago," he said.

"The Sonoran desert is a drought-stricken, frost-bitten tropical deciduous forest. It has its origins in the tropics" — greenhouse curator Robert Villa

Sisters Pat Marum and Rose Kasunic, who attended the greenhouse reopening, have a personal connection to the site. Their grandfather Richard Kenny was superintendent at the desert lab back in the early days, Marum said. They grew up with stories of the site, said Kasunic, and as a result, "It's always been intriguing for us."

Wilder said engaging with the public’s curiosity about the lab is part of the goal of the new greenhouse. The 860-acre site, now a National Historic Landmark, is the longest continually habited site in the nation.

"The relaunching of the greenhouse is about ... bringing people under the veils of science and telling them the stories, both from the cultural side of what an important cultural landscape human space this is, but then also how much we've learned about the functioning, the dynamics, the ebbs and flows of the desert, over 100 years now," Wilder said. 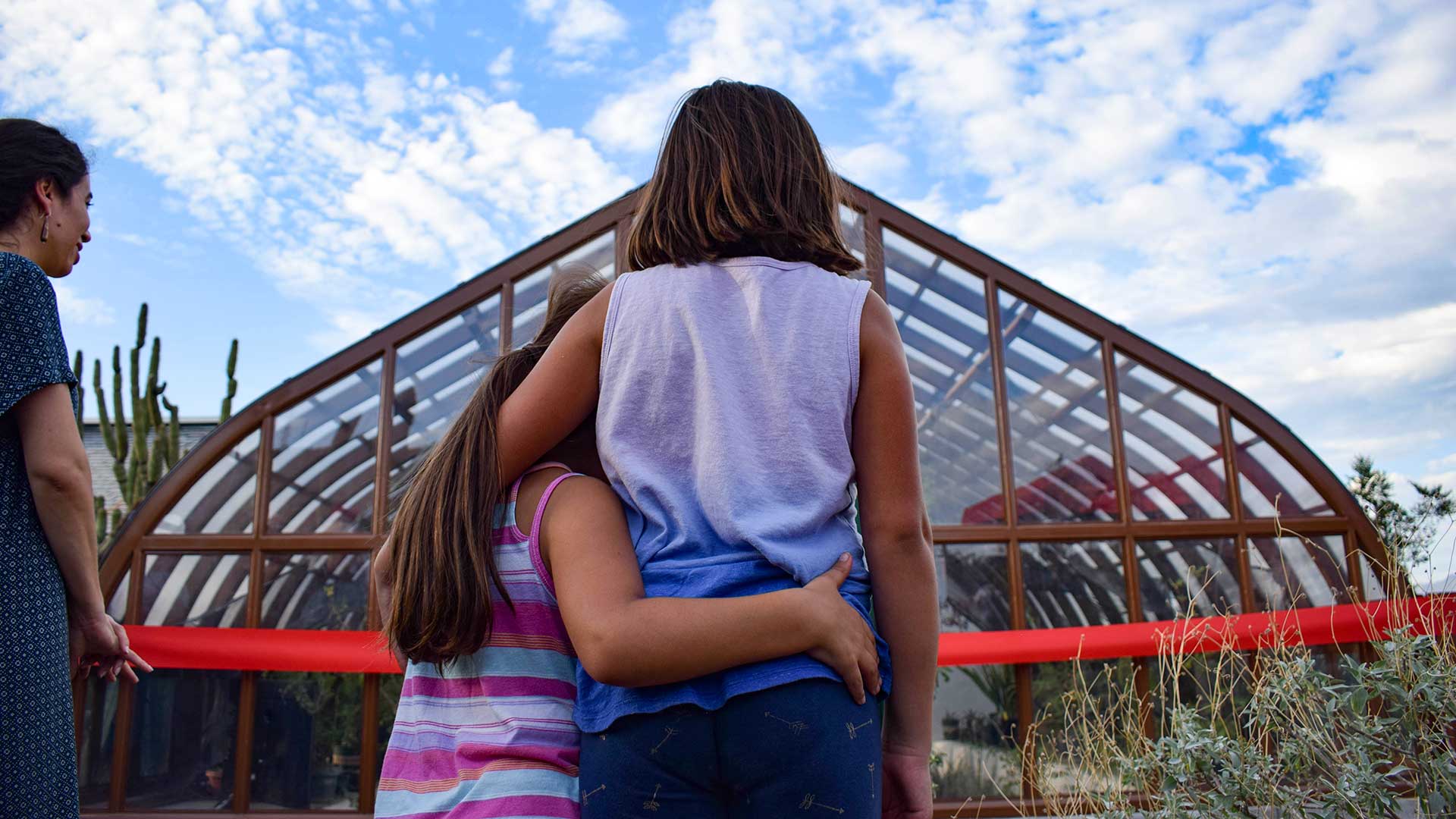 Villa, who grew up in the nearby Menlo Park neighborhood, agreed. "There are so many layers and threads of stories on this hill," he said.

“It's such a beautiful space, there's so many different people who come up the hill and walk in a natural area. It's restoration on so many levels: spiritual, physical, ecological,” Villa said.

Villa said he’s seeking to showcase Indigenous and scientific knowledge inside the greenhouse, and contribute to the natural wonder of Tumamoc, where the diversity of plants echoes that of the people who walk the hill everyday.

For this summer's water forecast, climate experts are looking back to winter University of Arizona researcher gets closer to solving ancient mystery How Arizona gets its energy
By posting comments, you agree to our
AZPM encourages comments, but comments that contain profanity, unrelated information, threats, libel, defamatory statements, obscenities, pornography or that violate the law are not allowed. Comments that promote commercial products or services are not allowed. Comments in violation of this policy will be removed. Continued posting of comments that violate this policy will result in the commenter being banned from the site.