Dams could protect ranchers from climate change's drought, but could they also contribute to it?

Wyoming is moving forward on building or expanding several reservoirs on the Green River, a main branch of the Colorado River. by Melodie Edwards Tweet 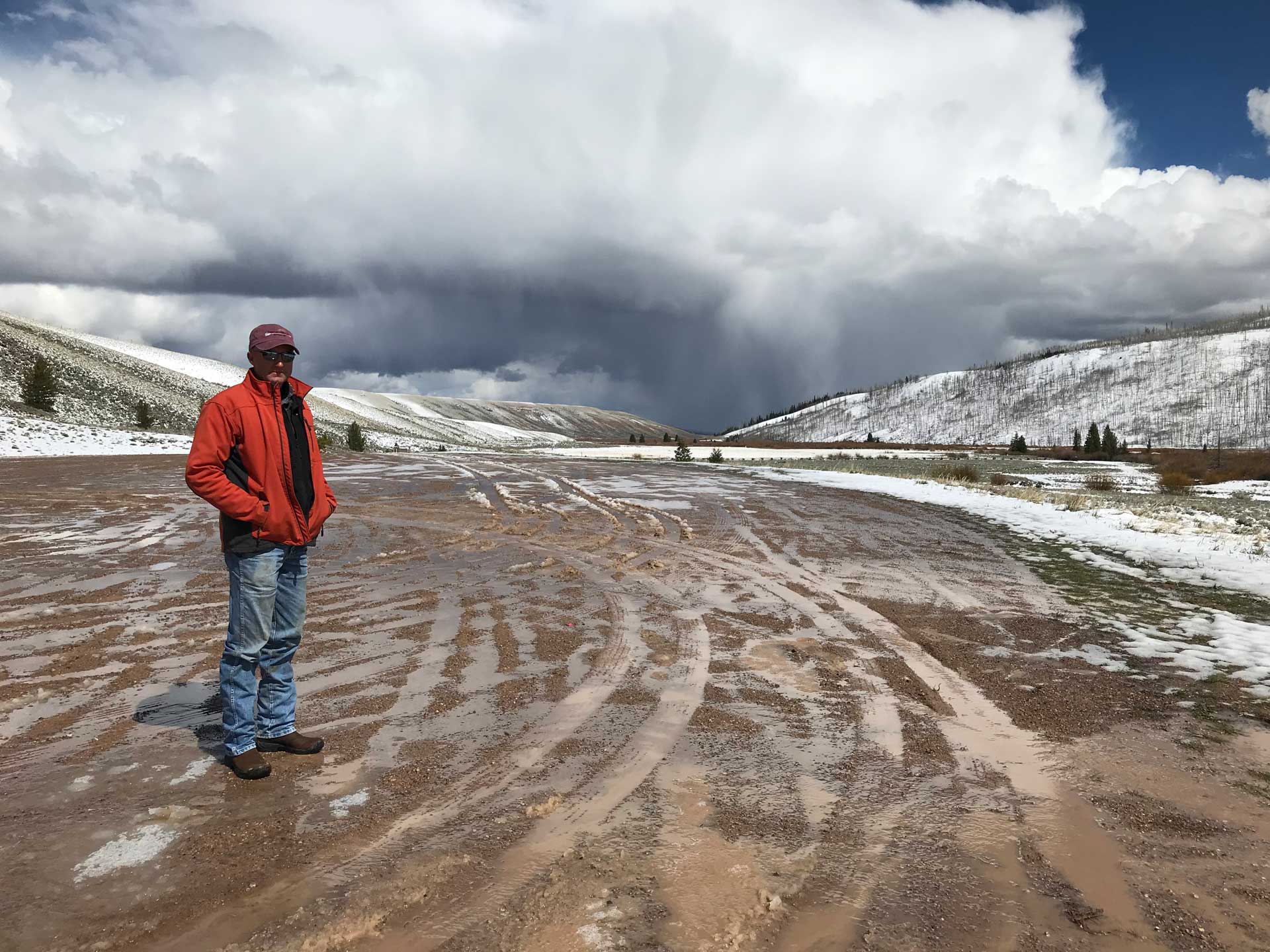 VIEW LARGER Rancher and water engineer Chad Espenscheid stands at an overlook of his property on the Middle Piney Creek, a snowstorm brewing behind him.
Melodie Edwards/Wyoming Public Radio

It’s late May in Wyoming. It snowed last night, and more snow is predicted. That’s why it’s good that Big Piney Rancher Chad Espenscheid is behind the wheel of the truck. The roads are sloppy and Middle Piney Creek is running high.

“Speaking of water,” he says, laughing.

“Yeah, seems like it’s starting to flood,” I observe.

“It’s been a cold, long winter,” he says. “The cows and calves are really needing some sunshine about now. We got quite a bit of sickness going on around the valley.”

That sickness could mean he’ll lose a lot of newborn calves. There are lots of things to be stressed about in ranching, and one of the big ones is water. Espenscheid says that's why he's glad the state is fixing up the Middle Piney Dam. It's fallen into disrepair at the top where the creek flows into the Green River.

“It would give Middle Piney Creek a little more of a steady flow instead of it all coming out in one shot and everybody really having to hustle around and capture it all at one time,” Espenscheid says.

He could really use that water to irrigate his hayfields to feed those calves, he says.

Not only is Espenscheid a rancher, but he’s also a water engineer and participates in an experimental water conservation program that pays ranchers to only irrigate when they have to. So in late summer after he's hayed his fields he turns off the spigot. But Espenscheid says, fixing that dam will store a modest 4,200 acre-feet of Colorado River water.

He’s not sure what to think about how siphoning that small amount out of the river will affect lower basin states that also rely on the Colorado River. “I don’t know, I’m just Wyoming through and true, so I’m kind of worried about Wyoming, I guess to be honest. So, I think we’ve got to take care of our own sustainability and make sure we have opportunities for growth.”

It’s not just the Middle Piney Reservoir that’s going to start dipping from the Colorado, though. Jason Mead at Wyoming's Water Development Office adds up all the acre-feet of water storage the state wants to build on the Green River drainage: “4,000 for Middle Piney, 10,000 for West Fork, that’s 14,000. Another eight at New Fork, so that’s 22,000, another nine between Meek’s Cabin, that’s 31,000...." 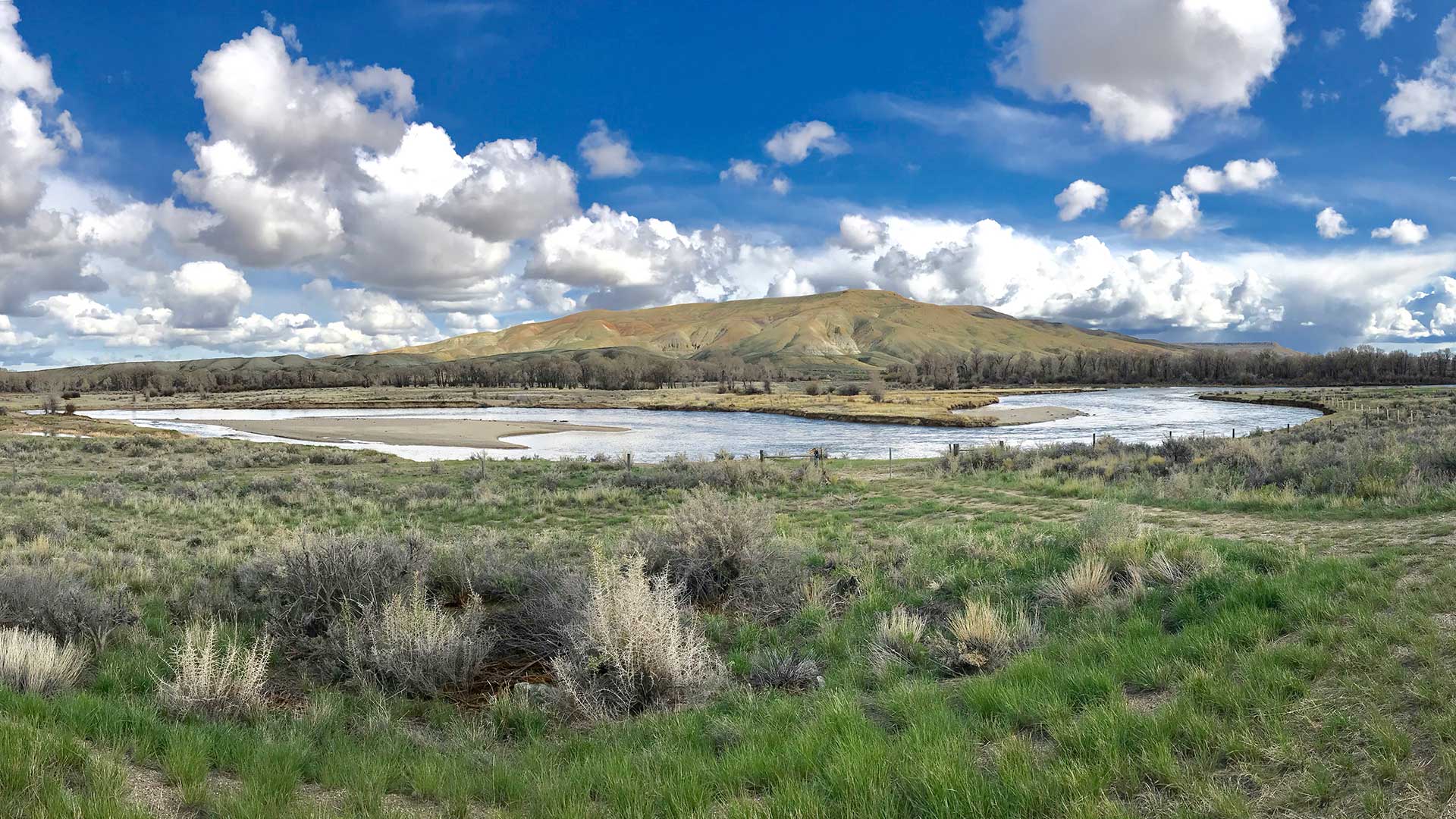 All told, he figures Wyoming could tack on about 50,000 acre-feet on five new or expanded reservoirs, including Big Sandy, West Fork, Meek’s Cabin and Stateline. And then there are the 80,000 acre-feet that the Fontanelle Reservoir could eventually add. The plan there is to complete that project when extreme drought draws it down low enough to finish its foundation. At 130,000 acre-feet total that would be enough water to supply a city of a million people, but the population of the entire state of Wyoming is half that.

“Every one of these projects we’re talking about really are for irrigation shortages and trying to handle the drought situations that everybody has faced over the years and trying to take water when we have good years and carry it over into years that are drier,” says Mead.

“If we can’t keep those businesses afloat, eventually they’re going to have to sell. Do they get developed in the future? We don’t know, but if we keep them in ranching, we know we’re going to maintain that open space,” he says.

“They want the water drained out so in the event of a flood they have storage capacity,” he explains. “That can cause very low flows downstream that dry up those flood plain wetlands.” Norton says those wetlands store huge amounts of organic carbon.

“There’s estimates that if we could raise soil organic carbon by about 0.4 percent per year that we would completely offset human-derived emissions of greenhouse gases.”

Think of all the plants growing like a green snake along streams in the otherwise arid Mountain West. Wetlands on undammed waterways can take up as little as two percent of the landscape but hold 15 to 30 percent of the carbon. But if reservoirs hold back all the water those green snakes will dry up and stop holding carbon.

“Conceivably, it could have a positive effect on downstream wetlands, if water tables are maintained relatively high,” says Norton. “Irrigation itself expands wetlands.”

Unfortunately, that’s not the only effect of dams on climate. One study shows that decomposing organic matter behind dams as the water level drops can produce large amounts of methane, a greenhouse gas that’s even more potent than carbon dioxide.

But rancher and water engineer Chad Espenscheid says the positives of building dams outweigh the negatives.

The question is: with all the Upper Basin states investing in more dams, what will the accumulative effect be?

What will Arizona do as its share of Colorado River water diminishes? “Not here for some agrarian fantasy” Upper Colorado River leaders push back against federal ask for conservation
By posting comments, you agree to our
AZPM encourages comments, but comments that contain profanity, unrelated information, threats, libel, defamatory statements, obscenities, pornography or that violate the law are not allowed. Comments that promote commercial products or services are not allowed. Comments in violation of this policy will be removed. Continued posting of comments that violate this policy will result in the commenter being banned from the site.