Support and opposition for two mines in Southern Arizona

As the Rosemont Copper mine plans to start construction, we talk with those for and against the project. by Ariana Brocious TWEET SHARE 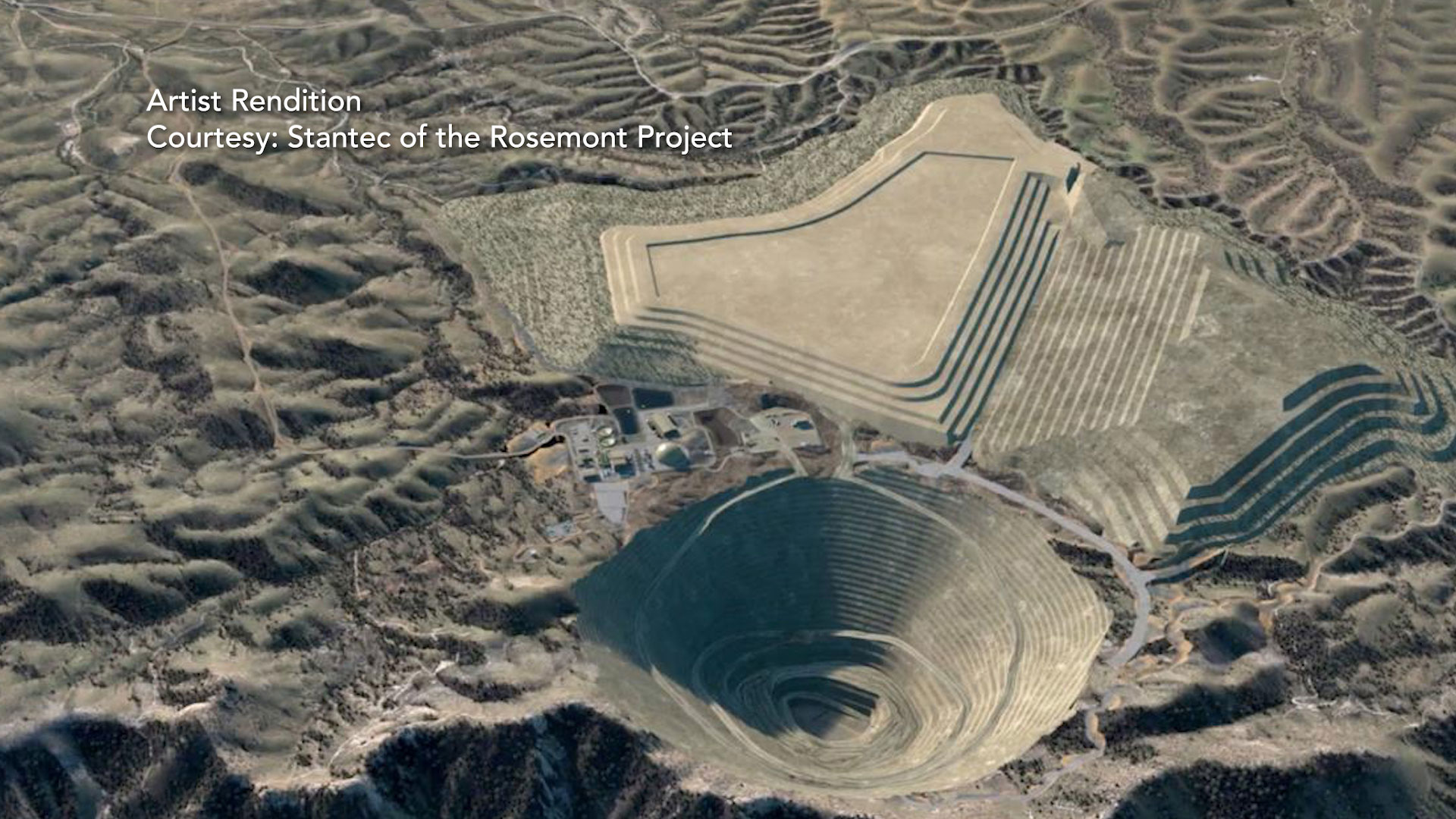 Artist Rendition of Rosemont Copper, 2019
Truescape for the Rosemont Project

Mining has always been a part of Arizona's history, a legacy that can still been seen around the state, in places like Bisbee or Morenci. It’s also a major economic driver: a 2017 industry report estimated mining's total economic impact in the state at $4.3 billion.

For years, a contentious battle has been underway over whether to allow another major open-pit copper mine in the Santa Rita Mountains about 30 miles east of Tucson. In March, Hudbay Minerals received the final permits it needed to begin construction on the Rosemont Mine. This week, The Buzz talked with those for and against the project.

Gayle Hartmann of Tucson is president of Save the Scenic Santa Ritas, the group leading local opposition to the Rosemont Mine. Her group, along with others including the Center for Biological Diversity and Sierra Club, have filed several lawsuits against the Rosemont Mine, most recently over the U.S. Army Corps of Engineers’ decision to issue a Clean Water Act permit. In April, the Pima County Board of Supervisors voted 3-2 along party lines to support the lawsuit.

While Tucsonans are focused on Rosemont, Patagonia Area Resource Alliance is opposing a project on private land in the Patagonia Mountains, now owned by mining company South 32. Alliance board member Carolyn Schafer has lived in the area for about 20 years. She says she and other community members were inspired by Save the Scenic Santa Ritas to form their own activist group.

Both women oppose the projects largely for reasons of environmental impacts.

"There are a lot of concerns, but number one is water,” Hartmann said. “Water is our most important natural resource, it certainly isn’t copper.”

Hartmann told The Buzz the mine would deplete and pollute water sources in the area. She says it would also have serious air quality and aesthetic impacts, including to wildlife like ocelots and jaguars that migrate through the Santa Rita Mountains.

Save the Scenic Santa Ritas and other conservation groups, along with the Tohono O’odham, Pascua Yaqui and Hopi tribes have requested an injunction in U.S. District Court in Tucson to block all construction work until ongoing lawsuits against the mine project are settled.

The proposed site of the Rosemont Copper mining project is in the Santa Rita Mountains in Southern Arizona.
AZPM

The company behind the proposed Rosemont Mine, Hudbay Minerals, says it's ready to start building the open-pit copper mine in the Santa Rita Mountains in June. Andre Lauzon is vice president of operations for the Arizona Business Unit of Rosemont Copper.

“The real meat of construction will start in July. We’re starting with some early archeological work in June,” Lauzon said. The company has started posting jobs for senior management positions.

Lauzon told The Buzz they expect to have between 2,000 to 2,500 employees hired by the end of the year, either working directly for Rosemont or in supporting jobs in engineering and construction. Hudbay Minerals expects the mine to start operating about three years from initial construction.

Lauzon told The Buzz that, in spite of the lawsuits, the project has been through years of review from state and federal agencies and they expect to move ahead with the project.

Brad Ross is a professor of practice in the Mining and Geological Engineering department and director of Geotechnical Center for Excellence at the University of Arizona. He said the demand for Arizona copper is high, and growing, partly due to population growth and partly due to society’s increased dependence on electronics. He told The Buzz Arizona has a bright future for mining technology, pointing to the industry's use of autonomous vehicles as an example.

The Buzz airs Fridays at 8:30 a.m. and 6 p.m. and Saturdays at 3:30 p.m. on NPR 89.1. You can subscribe to our podcast on iTunes and NPR One. See more from The Buzz.
SUBSCRIBE TO PODCAST
MORE: Economy, Environment, Mining, News, The Buzz, Water

Border officials warn of heat dangers in south Arizona Arizona GOP budget deal envisions massive income tax cut Arizona wildfires force more evacuations, highway closures
By posting comments, you agree to our
AZPM encourages comments, but comments that contain profanity, unrelated information, threats, libel, defamatory statements, obscenities, pornography or that violate the law are not allowed. Comments that promote commercial products or services are not allowed. Comments in violation of this policy will be removed. Continued posting of comments that violate this policy will result in the commenter being banned from the site.