Despite "OK" snowpack, the hot and dry conditions of 2018 put the Southwest in a drought hangover. by Luke Runyon, KUNC TWEET SHARE 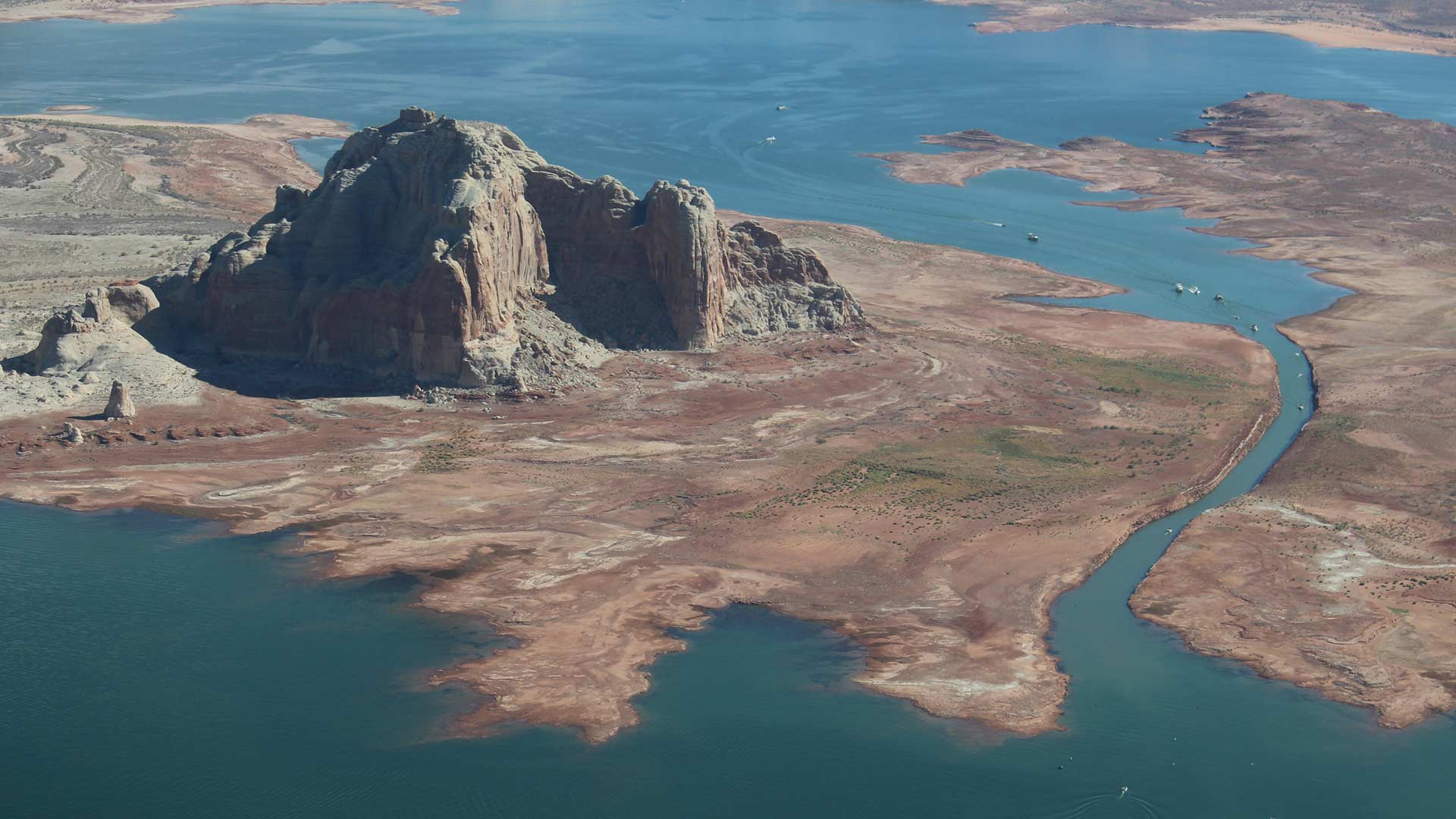 Following one of the hottest and driest years on record, the Colorado River and its tributaries throughout the western U.S. are likely headed for another year of low water.

That’s according to an analysis by the Western Water Assessment at the University of Colorado Boulder. Researcher Jeff Lukas, who authored the briefing, says water managers throughout the Colorado River watershed should brace themselves for diminished streams and the decreasing likelihood of filling the reservoirs left depleted at the end of 2018.

The briefing relies on data from the National Oceanic and Atmospheric Administration, the U.S. Geological Survey and the Natural Resources Conservation Service, among others.

“The snowpack conditions for Colorado and much of the intermountain West don’t look too bad,” Lukas says. “They range from ‘meh’ to ‘OK.’” 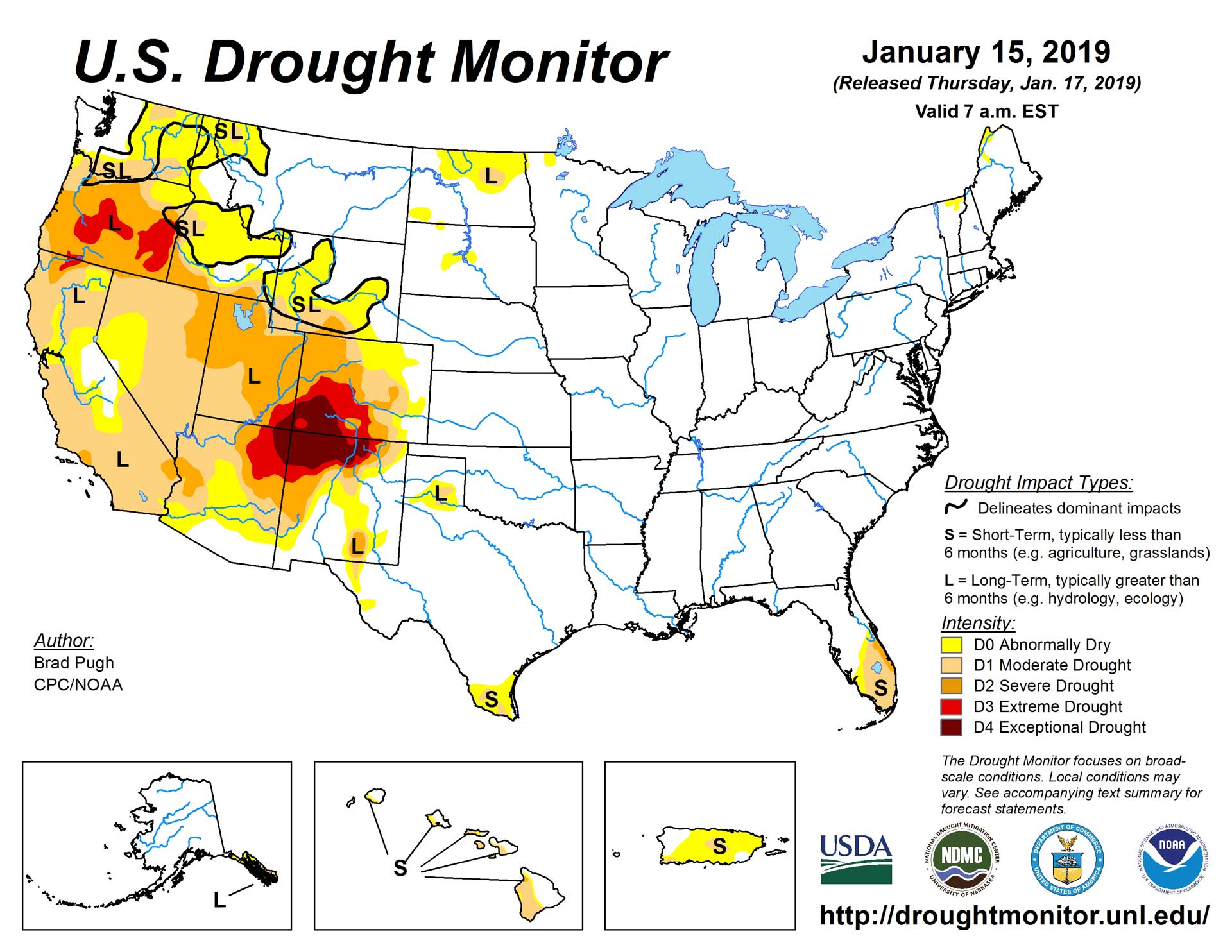 VIEW LARGER The Four Corners region remains in exceptional drought conditions, which will likely see little relief in 2019 according to a new briefing from the Western Water Assessment.
Drought Monitor

So with an “OK” snowpack in the mountains, we should be in the clear, right? Not necessarily. If you’re just looking at snowpack to gauge how well a winter is going, you’re doing it wrong, according to Lukas.

The record hot and dry conditions throughout 2018 sapped the ground of its moisture. Leading into this winter, “that puts us in a deep hole,” Lukas says.

Put another way, throughout the Southwest, we’re living in a drought hangover. And it’s going to take a lot more snow to pull us out of it.

Lake Powell, the first major reservoir the Colorado River hits on its journey throughout the Southwest, is currently projected to see 64 percent of its average inflow, according to the Colorado Basin River Forecast Center. That translates to a one-year deficit of more than 5 million acre-feet of water. One acre-foot is enough water to supply roughly one to two households for a year.

“That’s not as bad as what happened last year, but it’s pretty close,” Lukas says. “That’s going to just drain the big reservoirs — [Lakes] Powell and Mead — even further.”

The less-than-hopeful projections come as water managers and users throughout the river’s watershed, particularly in Arizona and California, attempt to curb their use in the face of declining reservoirs. They’re dropping due to an ongoing aridification within the basin, a product of climate change, and chronic overuse.

Drought contingency plans, in the works for years, have a federally imposed deadline of Jan. 31, and another dry winter will add more pressure to the negotiations.

“This certainly imparts more urgency to that mission to get those plans in place knowing that we’re likely to have a below par if not well below par year in the Upper Colorado,” Lukas says.

Climate change likely to keep hammering Colorado River's biggest reservoirs, model shows Indigenous activists arrested in demonstration against border wall construction near Quitobaquito Springs Arizona weekly unemployment jumps again
By posting comments, you agree to our
AZPM encourages comments, but comments that contain profanity, unrelated information, threats, libel, defamatory statements, obscenities, pornography or that violate the law are not allowed. Comments that promote commercial products or services are not allowed. Comments in violation of this policy will be removed. Continued posting of comments that violate this policy will result in the commenter being banned from the site.