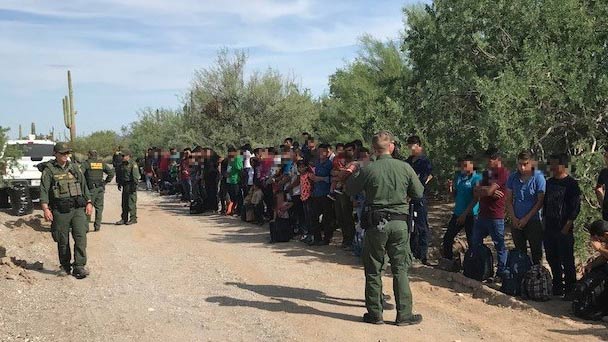 A Customs and Border Protection image accompanying a press release about a group of 128 migrants detained at the U.S.-Mexico border.

A group of 128 immigrants found in a remote part of the U.S.-Mexico border Friday are facing deportation.

A Border Patrol statement said the migrants were "abandoned" and "presumably brought to the border by human smugglers who remained in Mexico."

Agents at the Ajo Station patrolling near a border fence say the group included children — some as young as 4 — from Guatemala, Honduras, El Salvador and Mexico.

Authorities say all the immigrants were medically evaluated and determined to be in good health before they were processed and turned over to the enforcement removal operations within Immigration and Customs Enforcement.

Agents identified several adults in the group who had been previously charged with immigration violations.

Border Patrol: Apprehensions of Large Migrant Groups Becoming 'Trend' Yuma Border; Human Trafficking and Cartels; Santa Cruz River Threat Border Groups Close Temporary Shelters for Asylum Seekers, Citing Less Need
By posting comments, you agree to our
AZPM encourages comments, but comments that contain profanity, unrelated information, threats, libel, defamatory statements, obscenities, pornography or that violate the law are not allowed. Comments that promote commercial products or services are not allowed. Comments in violation of this policy will be removed. Continued posting of comments that violate this policy will result in the commenter being banned from the site.