× CORONAVIRUS: The latest coverage and local resources regarding COVID-19 from the Arizona Public Media newsroom.
/ Modified may 25, 2018 1:25 p.m.

New Lanes Planned for I-17 in Effort to Relieve Traffic

Construction will begin in 2021 and is expected to take about two years. by Associated Press TWEET SHARE 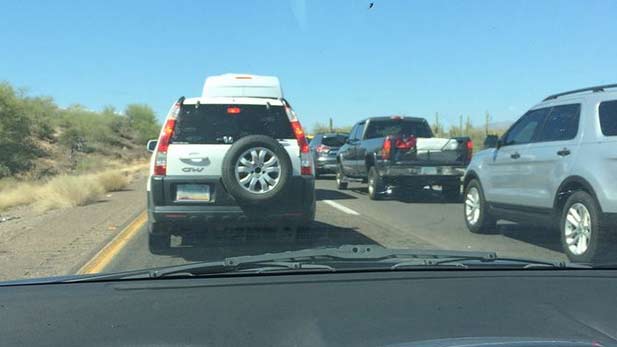 The lanes will carry people north Fridays and Saturdays and south on Sundays, the Arizona Republic reported.

But construction won't begin until 2021 and will take about two years to complete.

The new lanes will run between Black Canyon City and the Sunset Point rest stop in an effort to reduce delays north of Phoenix that sometimes last several hours on the weekends.

"The biggest hassle is having people sit on that hill," said Steve Boschen, director of ADOT's infrastructure delivery and operations division. "When it is 110 degrees out, we want to get them relief as fast as we can."

Crashes, even minor, clog the roadway as people head north to campsites and cabins on Fridays and Saturdays, and as they head back to the city on Sundays.

The drive between Phoenix and Flagstaff is usually about two hours, but accidents can extend that to four or more.

The Arizona Department of Transportation began a $24.4 million project last month to repave about 28 miles (45 kilometers) of northbound I-17 south of Flagstaff. That project is expected to add to travel times getting to Flagstaff from Phoenix through the summer.

The area of focus is the approximately 45-mile (72-kilometer) stretch between the community of Anthem and Cordes Junction, Boschen said.

The two new lanes will be next to the southbound I-17 lanes, but separated by a concrete barrier. They will be blocked off to allow traffic in one direction or the other depending on the need.

A third lane also will be added southbound from Black Canyon City to Anthem. Eventually, a northbound third lane in that area will also be added, transportation officials said.

Temporary Bridge to Ease Traffic Again During I-10 Work AAA: More Than 1/3 of Arizonans Will Travel for Holidays ADOT Launches App for Travel Alerts
By posting comments, you agree to our
AZPM encourages comments, but comments that contain profanity, unrelated information, threats, libel, defamatory statements, obscenities, pornography or that violate the law are not allowed. Comments that promote commercial products or services are not allowed. Comments in violation of this policy will be removed. Continued posting of comments that violate this policy will result in the commenter being banned from the site.