× CORONAVIRUS: The latest coverage and local resources regarding COVID-19 from the Arizona Public Media newsroom.
/ Modified may 24, 2018 9:46 a.m.

The vehicle spotted a woman six seconds before striking her, but the automatic braking system was disabled, a report said. by Tom Krisher, Associated Press TWEET SHARE 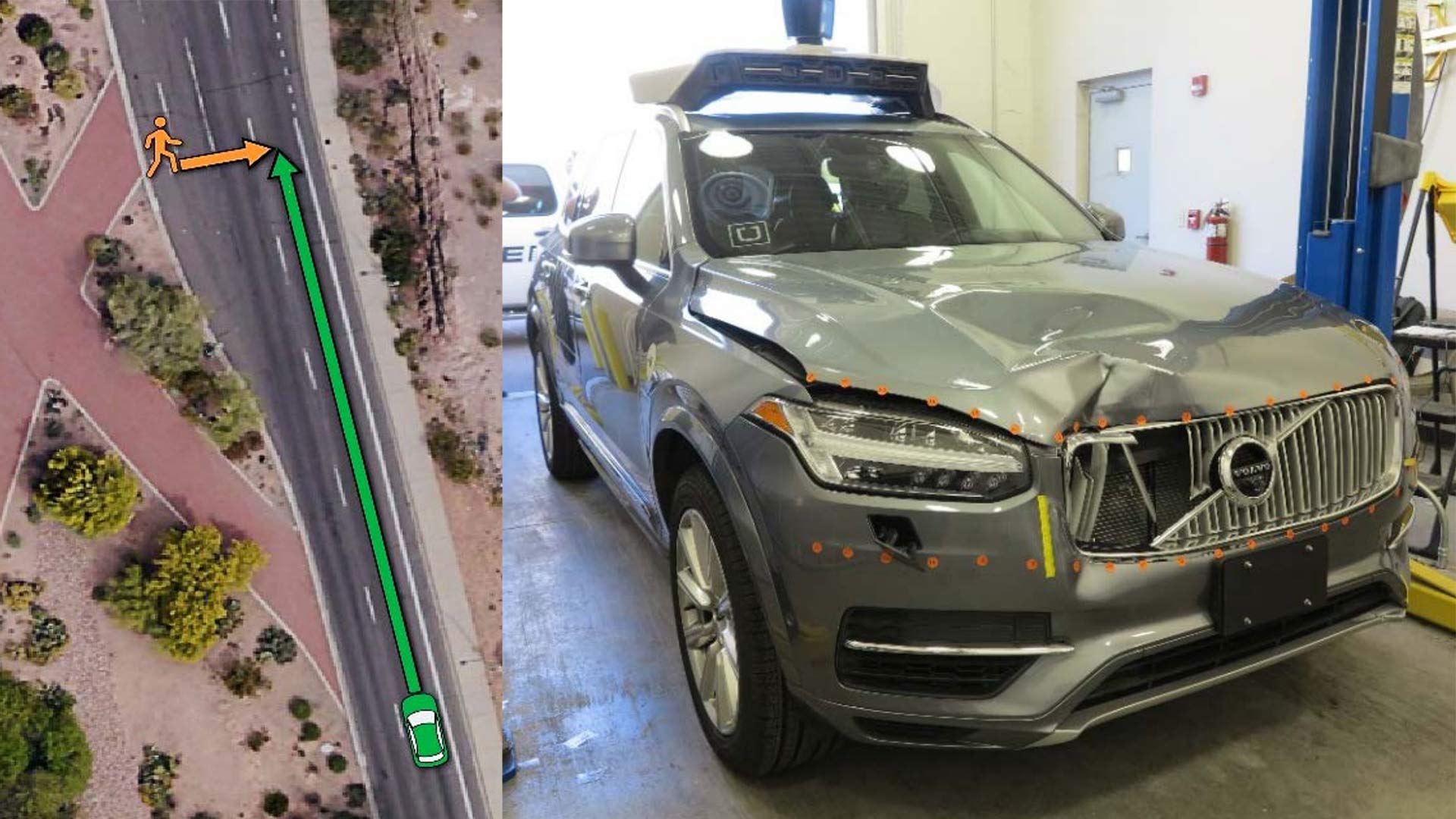 At left, an illustration of the path of a pedestrian and an Uber self-driving vehicle, at right, which struck and killed the pedestrian in March, 2018 in Tempe.
National Transportation Safety Board

DETROIT — The autonomous Uber SUV that struck and killed an Arizona pedestrian in March spotted the woman about six seconds before hitting her, but did not stop because the system used to automatically apply brakes in potentially dangerous situations had been disabled, according to federal investigators.

In a preliminary report on the crash, the National Transportation Safety Board said Thursday that emergency braking is not enabled while Uber's cars are under computer control, "to reduce the potential for erratic vehicle behavior."

Instead, Uber relies on a human backup driver to intervene. The system, however, is not designed to alert the driver.

In the crash, the driver began steering less than a second before impact but didn't brake until less than a second after impact, according to the preliminary report, which does not determine fault. A video of the crash showed the driver looking down just before the vehicle struck and killed 49-year-old Elaine Herzberg in Tempe, Arizona.

Uber said in a company release that it has worked closely with the NTSB and is doing an internal review of its self-driving vehicle program. The company also has brought in former NTSB Chairman Christopher Hart "to advise us on our overall safety culture, and we look forward to sharing more on the changes we'll make in the coming weeks." 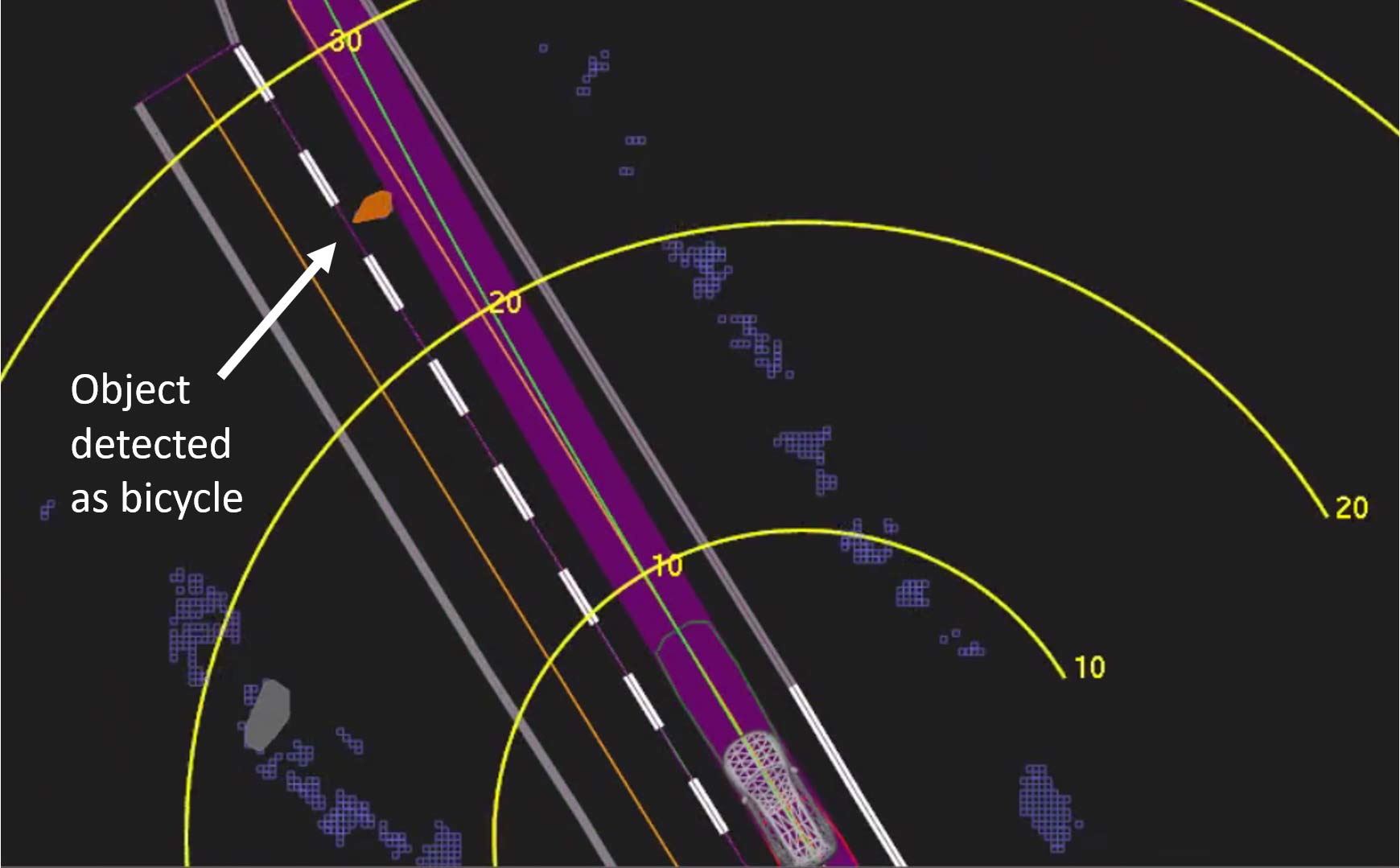 The NTSB report comes a day after Uber pulled its self-driving cars out of Arizona, eliminating the jobs of about 300 people who served as backup drivers and performed other jobs connected to the vehicles. Uber had suspended testing of its self-driving vehicles in Arizona, Pittsburgh, San Francisco and Toronto while regulators investigated the cause of the March 18 crash.

Sensors on the fully autonomous Volvo XC-90 SUV spotted Herzberg while the car was traveling 43 miles per hour and determined that braking was needed 1.3 seconds before impact, according to the report.

Herzberg was pushing a bicycle across a boulevard in the darkness when the crash occurred on a part of the road that had no crosswalk and was not lighted, the report said.

She was wearing dark clothing and did not look in the direction of the vehicle until just before impact. A toxicology report showed that she tested positive for methamphetamine and marijuana, according to the NTSB.

Also, the bicycle had no side reflectors and the front and back reflectors were perpendicular to the Uber SUV. Uber also disabled the Volvo's factory-equipped automatic emergency braking system when the vehicle is in autonomous mode, the report said.

In an interview with the NTSB, Uber's backup driver said she had been monitoring the "self-driving interface." While her personal and business telephones were in the vehicle, she said neither was in use at the time of the crash.

The NTSB said that all other aspects of the SUV's self-driving system were running normally at the time, and there were no faults or diagnostic trouble messages.

The agency, which can make safety recommendations to other federal agencies, said information in the preliminary report can change as the investigation progresses and that no conclusions should be drawn from the report.

Separately, the Tempe Police Department said it has submitted a report on its investigation to the Maricopa County Attorney's Office, but would not release any information about it until a review of the report by the office is completed. The county attorney is the main prosecution agency for most of the Phoenix area.

Waymo on its plans to grow in the Phoenix metro area Waymo Vehicle Involved in Mesa Crash Not in Autonomous Mode, Driver Says Waymo on Track to Launch Self-Driving Car Service in Phoenix This Year
By posting comments, you agree to our
AZPM encourages comments, but comments that contain profanity, unrelated information, threats, libel, defamatory statements, obscenities, pornography or that violate the law are not allowed. Comments that promote commercial products or services are not allowed. Comments in violation of this policy will be removed. Continued posting of comments that violate this policy will result in the commenter being banned from the site.