The tribe is looking for support as it works to finalize the transfer set out in a 1996 agreement. by Associated Press TWEET SHARE

FLAGSTAFF — The Hopi Tribe has reached out to local governments for help as it attempts to finalize a land transfer under an agreement between the tribe and the Navajo Nation.

The Hopi Tribe was promised nearly 23 square miles of state trust land south of Interstate 40 and east of Flagstaff in a 1996 agreement approved by Congress in a dispute over overlapping boundaries of Hopi and Navajo reservation lands, the Arizona Daily Sun reported last week. 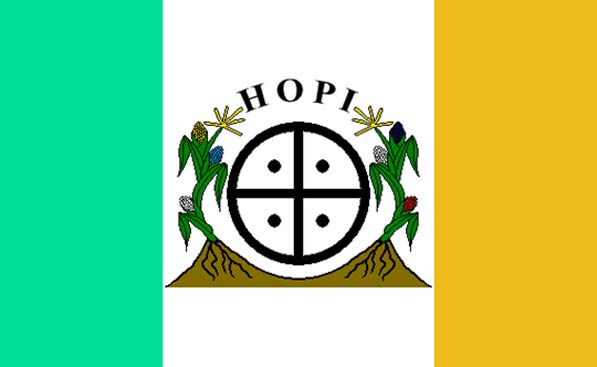 VIEW LARGER Flag of the Hopi Nation, adapted from www.hopi-nsn.gov.

Recent efforts on the land transfer by U.S. Sen. John McCain's office and the state Land Department were stymied by the inclusion of national forest tracts in the Flagstaff area.

The tribe has decided to reach out to local governments for support as it looks to finalize the land transfer through condemnation or a land swap without the original list of Flagstaff-area parcels.

Tribal Chairman Tim Nuvangyaoma has asked Coconino County Board of Supervisors and Flagstaff City Council to call on Gov. Doug Ducey and the Arizona Land Department to follow through.

"Having you guys stand side by side with us approaching the government at Gov. Ducey's office would mean a lot to us," he told supervisors. "We'd like to start moving forward and finding some solace and some peace of mind in getting this done."

If that strategy fails, the tribe will ask the Flagstaff City Council and the county to work with it to identify federal lands in Coconino County that would be suitable for some kind of land swap.

With the Navajo Generating Station expected to close at the end of next year, Nuvangyaoma said it's even more important for the tribe to acquire the lands, which could serve as a potential source of new revenue.

The Board of Supervisors did not immediately respond to the tribe's request for support, but several board members have expressed a desire to get involved.

"I think we're at a place where we really need to settle this," Supervisor Lena Fowler said.

Tribe That Owns Grand Canyon Skywalk to Improve Airport Tohono O'odham, Pascua Yaqui, Hopi Sue to Stop Rosemont Mine Northern Arizona Leaders to Discuss Hopi Land Swap
By posting comments, you agree to our
AZPM encourages comments, but comments that contain profanity, unrelated information, threats, libel, defamatory statements, obscenities, pornography or that violate the law are not allowed. Comments that promote commercial products or services are not allowed. Comments in violation of this policy will be removed. Continued posting of comments that violate this policy will result in the commenter being banned from the site.