No action taken on two big initiatives from the governor and a contentious school voucher law. by Bob Christie, Associated Press Tweet 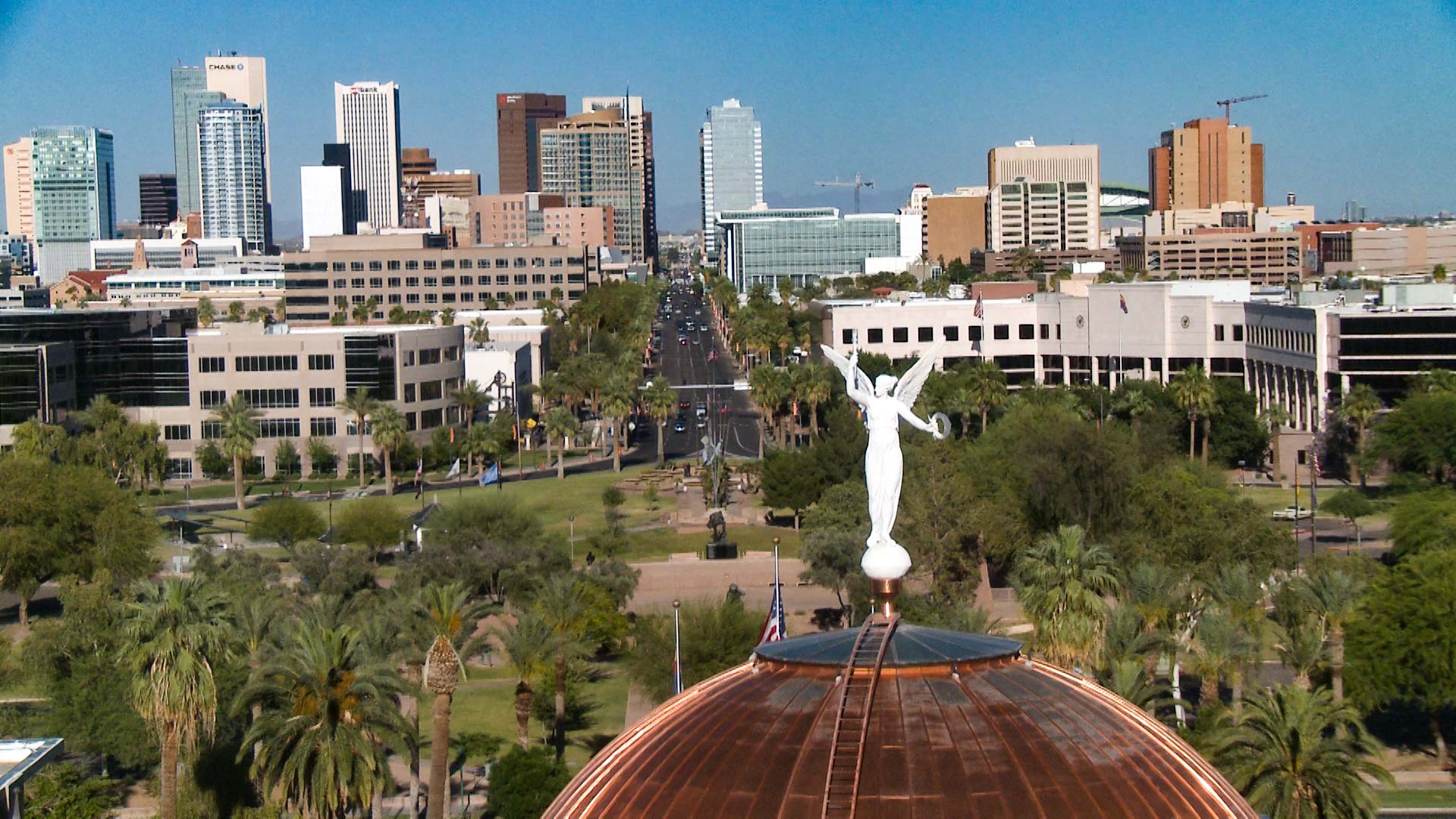 A view of downtown Phoenix from the top of the Capitol dome.
AZPM Staff

PHOENIX — The Arizona Legislature adjourned its 2018 session early Friday, leaving without taking action on two of Gov. Doug Ducey's biggest initiatives of the year, a water policy overhaul and an ambitious school safety proposal that fell victim to concerns about civil rights.

The Republican-controlled Legislature also failed to repeal a contentious school voucher expansion law that is set to be on the November ballot after opponents of the 2017 measure gathered enough signatures to block its implementation. The fate of the voucher expansion was caught up in a momentous push by public school teachers, who rose up in early March and eventually went on strike, forcing the Republican governor and lawmakers to award them with big raises and more school funding in the budget. Although it was not enough to meet the teachers' demands, they ended a six-day strike, allowing most affected schools to reopen Friday.

Republican Sens. Kate Brophy McGee and Bob Worsley both went on record Thursday opposing any repeal, with Worsley calling the issue "kryptonite" and Brophy McGee simply saying "it needs to go to the ballot." With all Democrats opposed, there was no way it could pass the Senate.

Teachers and other education advocates banded together as Save Our Schools Arizona and gathered more than 100,000 signatures to block the universal voucher bill last summer, a move that kept it from taking effect until voters statewide could weigh in.

They argued private school vouchers siphoned money from the state's cash-strapped public schools, while backers said they give parents a choice about where their children attend school.

There has been talk all session of majority Republicans repealing or replacing it to negate the ballot measure.

Senate President Steve Yarbrough and House Speaker J.D. Mesnard presided over their final sessions Thursday afternoon and evening, after shepherding a $10.4 billion budget through the Legislature in a marathon session that began Wednesday night and ended after daybreak. The budget provides $300 million to teachers for 9 percent raises in the fall, with a promise of 5 percent raises in each of the next two years.

Ducey wanted an overhaul of state water laws, including legislation to give him major control over Colorado River water now held by the elected board that oversees the Central Arizona Project aqueduct system. The school safety proposal died because of a provision that would allow family members to obtain a court order to remove guns from a person at risk of committing a shooting, and allowing them to be ordered held for a mental evaluation. Republican Rep. Eddie Farnsworth said that was a bridge too far because it essentially could incarcerate someone without adequate safeguards.

"The members in the House were just concerned with the due process," Farnsworth said. "One of the real challenges we had is that it was a civil action but it looked very much like a criminal action in its consequences."

Democrats also opposed the measure because it didn't contain universal background checks and other provisions.

"We don't have any support at all," Farnsworth said. "The Democrats are off, probably most of the Republicans are concerned and off, so..."

Lawmakers made final decisions on several hot-button pieces of legislation Thursday evening, including changes to the state's redistricting and clean election commissions.

The changes to the redistricting commission approved by voters in 2000 failed in the Senate late Thursday. It would have asked voters to boost membership to nine from five and require that all legislative districts are within 2 percent population differences.

Lawmakers did pass a measure that will ask voters to make major changes in the state's public elections financing system. The measure would allow a committee appointed by the governor to review rules adopted by the Citizens Clean Elections Commission. It also would bar candidates using public financing from using any of that money for services provided by political parties.

The commission opposes the measure's provision requiring rule reviews by the governor's regulatory review commission. Democrats opposed to the measure say that puts a politically-appointed agency in charge of the independent commission's authority, while Republicans said it prevents gaming of the system and adds oversight other state offices must follow. The bipartisan commission was created by voters in 1998, and the measure will be on the November ballot.

Few Swing Districts in Arizona Legislature Races GOP Brass Wants Arizona Lawmaker in Immigration Remark Out Arizona Democrats Call for Special Legislative Session
By posting comments, you agree to our
AZPM encourages comments, but comments that contain profanity, unrelated information, threats, libel, defamatory statements, obscenities, pornography or that violate the law are not allowed. Comments that promote commercial products or services are not allowed. Comments in violation of this policy will be removed. Continued posting of comments that violate this policy will result in the commenter being banned from the site.