Educators looked on as lawmakers worked all night to approve the spending plan. by Christopher Conover Tweet 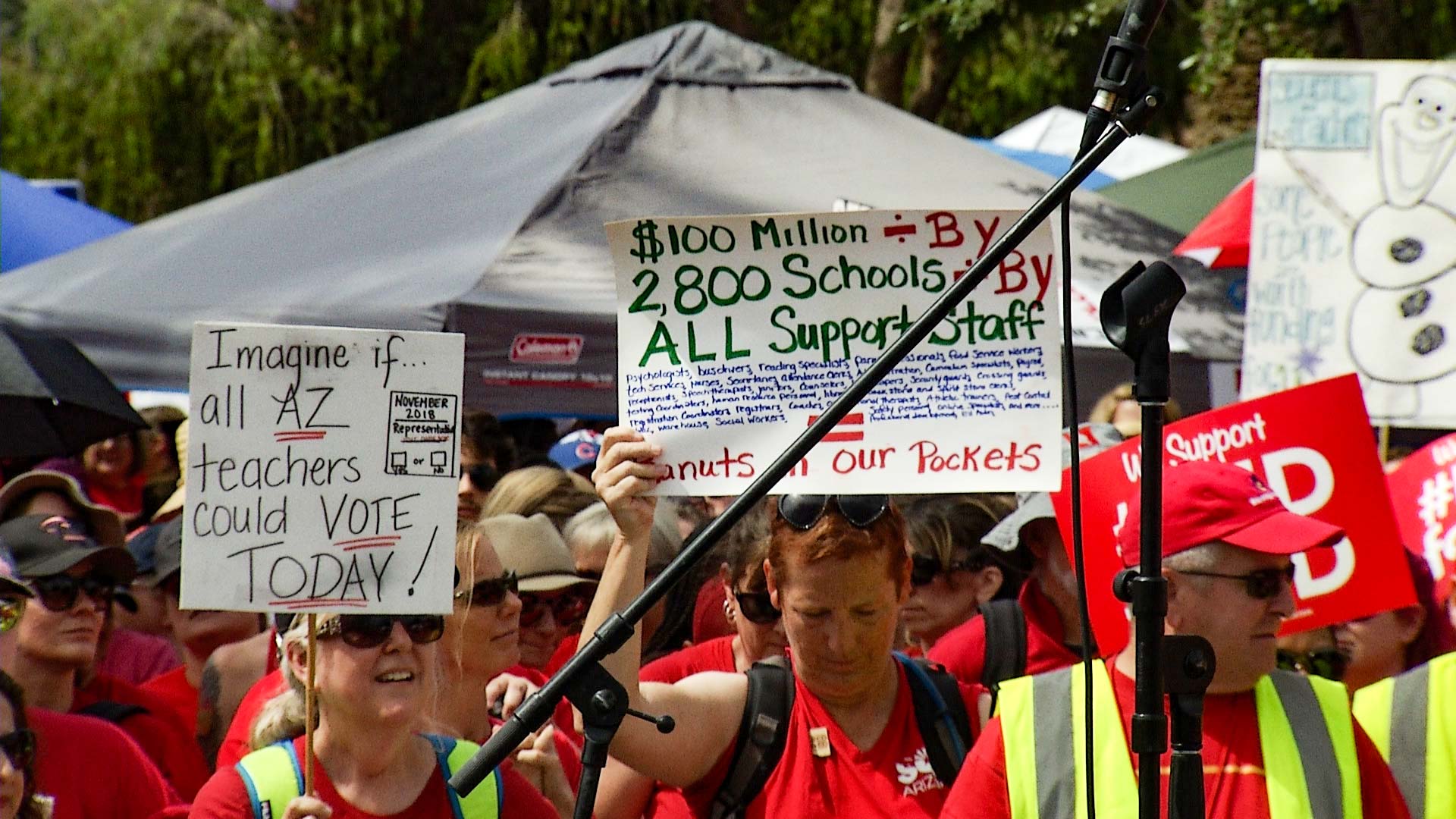 Protestors carry signs outside of the Arizona Capitol, April 30, 2018.
AZPM

The education portion of the budget was passed in the predawn hours Thursday and, just after six in the morning, Gov. Doug Ducey posted a Twitter video showing him signing the school funding plan.

"It’s a good way to start the day," said Ducey.

Just after nine Thursday morning, when most people were arriving at work, the Arizona House of Representatives voted on the last of the budget bills, ending a 13-hour floor session.

After tens of thousands of teachers protested outside the Capitol for the last week, teacher raises and education funding were the parts of the spending plan that got the most attention. The budget funds a 9 percent raise for teachers in the next school year. It also sets up funding for 5 percent raises over the following two school years

In the House, the raise was not enough to sway Democrats to vote for the plan.  Rep. Rebecca Rios, House minority leader, called the budget "a shell game."

"It didn't need to have gimmicks and fund shifts. We didn't need to take from one important program to fund another because all you are doing is creating a deficit in those programs you are taking away from," said Rios.

Those fund shifts include an increase in the amount of money hospitals pay to fund Medicaid. That additional money will allow the state to shift health dollars to education.

The same method is being used in the transportation budget, which includes a new, $18 fee on car registration.

The public galleries in the House and Senate were filled with teachers during the all-night budget debate.

Rep. Bob Thorpe told the teachers Republicans were not the bad guys.

Three of the four Democratic senators who voted for the education budget were Sen. Steve Farley, Sen. David Bradley and Sen. Andrea Dalessandro. All three senators are from Southern Arizona.

House democrats explained why they did not approve the budget.

"We stood with educators from the beginning to create the pressure to even get to this point and we've voted against because it was not enough," said Rep. Ken Clark.

Clark also complained about a budget process that left democrats on the outside.

Democrats told the teachers in the gallery that the budget "failed" the education system.

"I find that an incredible characterization," said House Speaker Mesnard. "My friends on the other side of the aisle have only ever proposed, as far as I can tell, in terms of anything here on the floor, a 4 percent raise for teachers with, literally, money that didn't exist."

While the budget provides more money for teacher salaries, it does not guarantee how much each teacher receives. Distributing the funds is up to local school districts.

The same is true for the $100 million in the budget that Ducey said is for raises for support staff like bus drivers.

That money can be used for those raises or other priorities. It is all up to the school district.

Candidates for Governor Want Better Education, Differ on How Arizona Democrats Call for Special Legislative Session Arizona Governor Signs Remaining Bills
By posting comments, you agree to our
AZPM encourages comments, but comments that contain profanity, unrelated information, threats, libel, defamatory statements, obscenities, pornography or that violate the law are not allowed. Comments that promote commercial products or services are not allowed. Comments in violation of this policy will be removed. Continued posting of comments that violate this policy will result in the commenter being banned from the site.